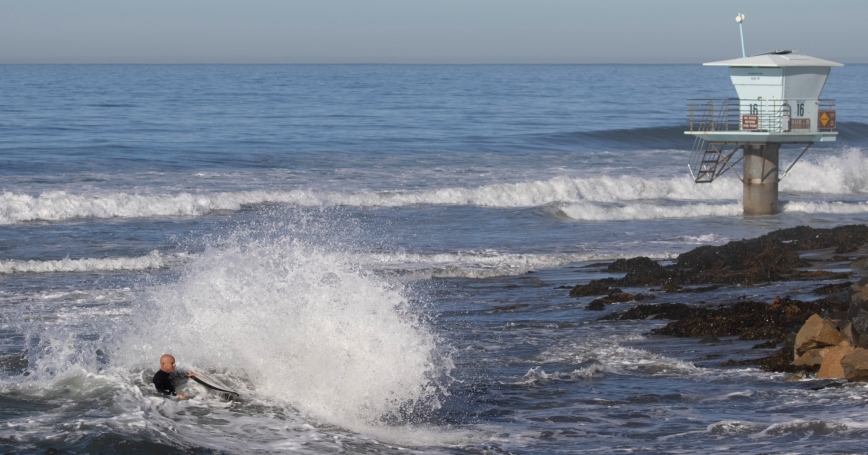 A surfer makes his way to the beach during a King Tide event along the California coastline at Cardiff State Beach in California, November 16, 2020

The state of California has changed its sea level rise guidance for state agencies and coastal communities, now advising in new “Principles for Aligned State Action” that Californians employ a single sea level rise target—plan for 3.5 feet by 2050—as opposed to the more flexible approach the state used in the past. But this single sea level rise number does not represent the best available science and could make California less resilient to climate change.

At the same time, the Biden administration has made climate a key priority, offering California a golden opportunity to advance its own goals while supporting climate change efforts nationwide. The shift on sea level rise guidance could weaken California's leadership role in demonstrating best practices for the nation.

To be sure, it's easy to understand the state's desire to represent the sea level rise challenge with the single 3.5-foot number. A clear and bracing target may spur needed action. Rising seas create significant risk to the health, safety, and economic vitality of California's coast communities, and we must prepare.

So why a more flexible approach? First, a target of 3.5 feet by 2050 does not represent the best available science. Just two years ago, the state of California established guidance projecting seas would rise between 8 inches and 2.6 feet in Los Angeles by 2050. A recent report by the Intergovernmental Panel on Climate Change found the likely range was between 1.5 and 2.8 feet globally—but for the year 2100, not 2050. The state explains that communities should plan for 2100 impacts by 2050 to provide a 50-year margin of safety.

Rising seas create significant risk to the health, safety, and economic vitality of California's coast communities, and we must prepare.

While helpful in some cases, there are approaches that would reduce risk more effectively than this simple formulation in many coastal communities.

Of equal concern, California's new Principles of Action try to represent all the variables that lead to sea level rise with a single number. The seas are rising due to climate change primarily because ocean water expands as it warms and because the disintegrating Greenland and Antarctic ice sheets add more water to the sea. But the rate at which these changes will occur is not known with precision.

Picking any single sea level rise target therefore risks under- or over-investment. Pick too high a number and communities, state agencies, and firms will spend too much money hardening and relocating infrastructure if the full threat fails to materialize. Pick too low a number and communities, agencies, and firms will be left unprepared if the ice sheets disintegrate and storm surges amplify faster than expected.

California's 2018 California Sea Level Rise Guidance, for example, had a more flexible approach. It addressed the sea level rise challenge with two steps. First, it advised that each community and project choose an initial sea level rise target from a range. A community could choose from the high end of the range for a long-lived, expensive to relocate investment like a water treatment plant, or choose from the low end of the range for a short-lived, less expensive to relocate investment like a parking lot or a trail.

Second, the guidance suggested a contingency-planning approach called “adaptation pathways,” which provides flexible action over time, right-sizing each step of the way, and lowering the cost of any future adjustments. Adaptation pathways aren't tied to a specific sea level rise target. Instead, they specify “signposts,” or future changes in natural or human systems that would indicate the initial target level was too high or low. For instance, a community might build a levee to accommodate a projected sea level rise of 2 feet. But it could allow space to add width and height to the levee in coming decades if sea levels looked like they were instead headed to 4 feet.

Planning well for sea level rise will help guide the way for other challenges.

A flexible approach will also build capacity that California and the nation need to respond to the many other serious and growing climate-related risks. Incorporating the best science into good planning is perhaps simplest for sea level rise because the hazard mostly comes from a known direction (seaward) and will slowly rise in the decades to come. Climate risks from storms, drought, fire, heat, and biodiversity loss are much more multidimensional. Planning well for sea level rise will help guide the way for these other challenges.

Adding flexibility to the new state principles on sea level rise, while retaining simplicity, is in fact relatively easy to do: California can just explicitly add flexibility as an option. A community, agency, or firm could plan for 3.5 feet by 2050 or demonstrate that it has developed a flexible, adaptive pathways-type approach consistent with the best available science. Some might choose the former option. But for many of their most consequential decisions, others will choose the latter—significantly enhancing both their coastal resilience and California's leadership role.

This commentary originally appeared on San Diego Union Tribune on February 17, 2021. Commentary gives RAND researchers a platform to convey insights based on their professional expertise and often on their peer-reviewed research and analysis.