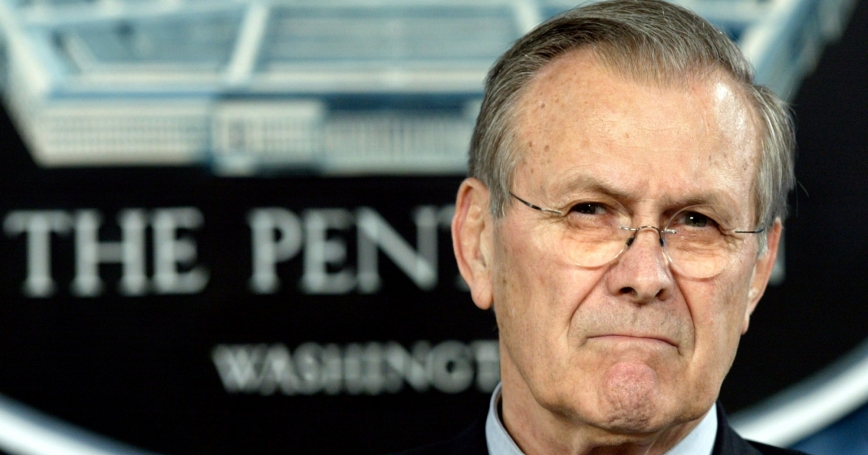 U.S. Secretary of Defense Donald Rumsfeld pauses during a news conference at the Pentagon in Washington, D.C., March 29, 2005

Throughout his years as George W. Bush's secretary of defense, Donald Rumsfeld repeatedly resisted U.S. military participation in nation-building–type operations. This antipathy first manifested itself in the early weeks of that administration when Rumsfeld proposed to unilaterally withdraw U.S. forces from NATO peacekeeping operations in Bosnia. Ending the Balkan wars that followed the disintegration of Yugoslavia had been President Clinton's proudest foreign policy legacy. Success had come only when, after years of hesitancy, Clinton agreed that U.S. forces would participate in the resulting peacekeeping.

As a result, the conflicts in Croatia, Bosnia, and subsequently Kosovo were brought to a conclusion. NATO operations in Bosnia then slowly wound down, but U.S. European allies, who were providing most of the troops, were nowhere near ready to abandon the mission. Secretary of State Colin Powell argued successfully that “We went in together, and we should go out together.” U.S. forces remained, in ever dwindling numbers, until 2005, when the mission was terminated.

Later that year the issue posed itself anew, this time with respect to Afghanistan. Now it was Hamid Karzai, the newly installed anti-Taliban leader in Kabul, who was urging the deployment of international peacekeepers. Rumsfeld opposed the creation of such a force, with or without American participation. The small U.S. military presence then in the country was focused exclusively on hunting down remaining al Qaeda elements. Rumsfeld wanted neither to expand the U.S. mission nor to introduce further international troops beyond the small contingent that was already helping provide security for the capital, Kabul. Powell made the case for expanding this international force to the other major population centers in the country, but on this occasion Rumsfeld prevailed, and this step was not taken for another two years.

The issue arose for a third time as the invasion of Iraq was contemplated. What should be the mission of U.S. forces once Saddam Hussein had been overthrown? Rumsfeld advocated that a new Iraqi government should be immediately installed and that U.S. force levels should be rapidly reduced. Bush chose instead to set up a U.S.-led occupation regime, but the drawdown of U.S. forces went ahead until widespread looting broke out and a violent resistance movement emerged. U.S. troop withdrawals were then halted, but reinforcements sufficient to secure the country were not sent until three years later, by which time Rumsfeld had been succeeded by Bob Gates.

Even as the United States terminates the last of those nation-building missions, that in Afghanistan, it is worth reflecting on these experiences. Many will regret that Rumsfeld did not succeed in avoiding long-term commitments of American forces in Afghanistan and Iraq. Yet the effect of Rumsfeld's resistance was to make unavoidable operations more difficult and eventually less successful. The judgment as to whether these missions were avoidable turns on whether one believes that the United States can invade a country, overthrow its government, and escape responsibility for the consequences. Based on these historical precedents, I don't think it can. George W. Bush seems to have agreed. His secretary of defense did not.

James Dobbins is a senior fellow at the nonprofit, nonpartisan RAND Corporation. A career diplomat, he was assistant secretary of state for Europe, 2000–2001, and the Bush administration's special envoy for Afghanistan 2001–2002. Dobbins is the author of Foreign Service: Five Decades on the Front Lines of American Diplomacy.

This commentary originally appeared on The Hill on July 3, 2021. Commentary gives RAND researchers a platform to convey insights based on their professional expertise and often on their peer-reviewed research and analysis.