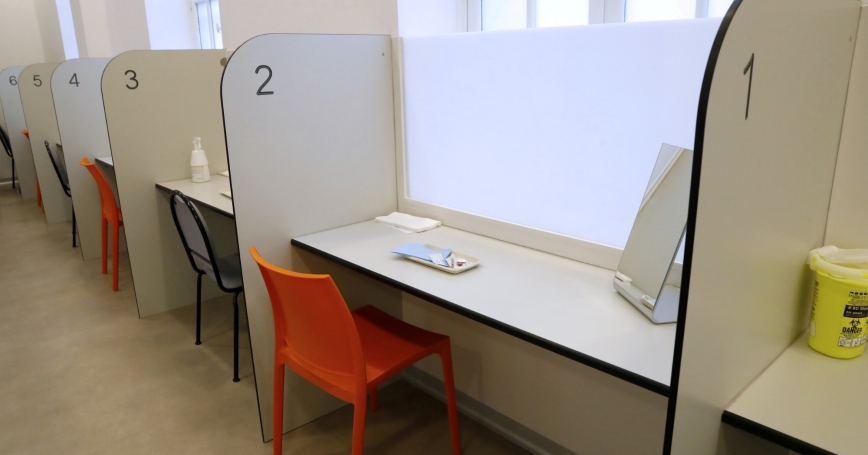 Trays of injection materials are placed in cubicles at the SCMR (a supervised drug injection site) in Paris, France, October 11, 2016

by Beau Kilmer and Bryce Pardo

Earlier this month, the U.S. Supreme Court declined to hear arguments about the federal ban on Philadelphia's proposed supervised drug consumption site. For those wanting to pilot and research these programs, there may be other avenues for addressing federal barriers.

Supervised consumption sites—also referred to as supervised injection facilities or overdose prevention sites—are places where people who use drugs can consume them under supervision of trained staff. Not only will someone intervene if an individual overdoses, but these sites also typically provide sterile equipment (e.g., syringes), naloxone kits, and referrals to other services such as substance use treatment. While the published literature on the sites is large and overwhelmingly positive, it is limited in its methodological rigor and the number of sites evaluated.

There are now more than 100 of these sites operating in at least 10 countries, but none are legally sanctioned in the United States. From Philadelphia to Denver to San Francisco, proponents have expressed interest in implementing supervised consumption sites in response to the unprecedented rise in drug overdose deaths. Earlier this year, the governor of Rhode Island signed a bill to implement a pilot program.

If federal officials were to decide that they wanted to make it easier for communities to pilot and evaluate supervised consumption sites, there are options.

U.S. federal law remains a major barrier. Knowing that Philadelphia proponents at the Safehouse nonprofit were planning to open a supervised site, then-U.S. Attorney Bill McSwain filed a lawsuit arguing that the site would violate the federal Controlled Substances Act. A federal judge ruled against the government (PDF), noting that “there is no support for the view that Congress meant to criminalize projects such as that proposed by Safehouse.” However, the U.S. Court of Appeals overturned that decision and proponents for the site petitioned the Supreme Court to hear an appeal, which was denied.

But if federal officials were to decide that they wanted to make it easier for communities to pilot and evaluate these sites, there are other options.

For example, lawmakers could opt to amend the Controlled Substances Act to explicitly allow supervised consumption sites, or they could choose to pass a “budget rider” prohibiting federal funds from being used to enforce the law against these facilities. But the possibility of laws like this passing in the current legislative environment seems dim.

Another option could be for the U.S. Department of Justice to treat supervised consumption sites like storefronts in some states that legally sell cannabis.

While 19 states have passed laws to allow the production and sale of cannabis to adults, these activities are still violations of the federal Controlled Substances Act. After Colorado and Washington passed legalization in 2012, the Department of Justice published a guidance memorandum (PDF) indicating that although this activity was prohibited under federal law, federal prosecutors should focus limited resources on eight enforcement priorities, such as preventing cannabis distribution to minors and preventing cannabis revenues from going to criminal organizations.

The Obama administration signaled it would not interfere in cannabis activities in states where it is legal. The memorandum was rescinded during the Trump administration, but the approach to cannabis (in states that have legalized it) did not change.

In a similar vein, the Department of Justice could publish guidance indicating it will not use its limited resources to prevent supervised consumption sites from operating under certain conditions, or after taking specific steps. For example, it could insist that cities wanting to open a site have a memorandum of understanding signed by local public health and law enforcement officials. The Department of Justice could also make it a condition that there be a strong evaluation component.

Limiting policy responses to existing approaches will likely be insufficient and may condemn many people to early deaths.

While COVID-19 seems to have put issues with drug overdose deaths on the back burner, they are still boiling over. Increasing access to high-quality substance use treatment will help, but the ongoing problems with illegally produced fentanyl cannot be addressed like a regular drug epidemic. Limiting policy responses to existing approaches will likely be insufficient and may condemn many people to early deaths.

No one claims supervised consumption sites alone will solve the overdose crisis, but some places believe the sites might help address some of the overwhelming problems they are confronting. Federal officials can continue to block these efforts or make it easier for these jurisdictions facing an extremely challenging situation to try something new.

Beau Kilmer is the McCauley chair in drug policy innovation and director of the Drug Policy Research Center at the nonprofit, nonpartisan RAND Corporation. Bryce Pardo is a policy researcher at RAND.

This commentary originally appeared on Philadelphia Inquirer on October 22, 2021. Commentary gives RAND researchers a platform to convey insights based on their professional expertise and often on their peer-reviewed research and analysis.