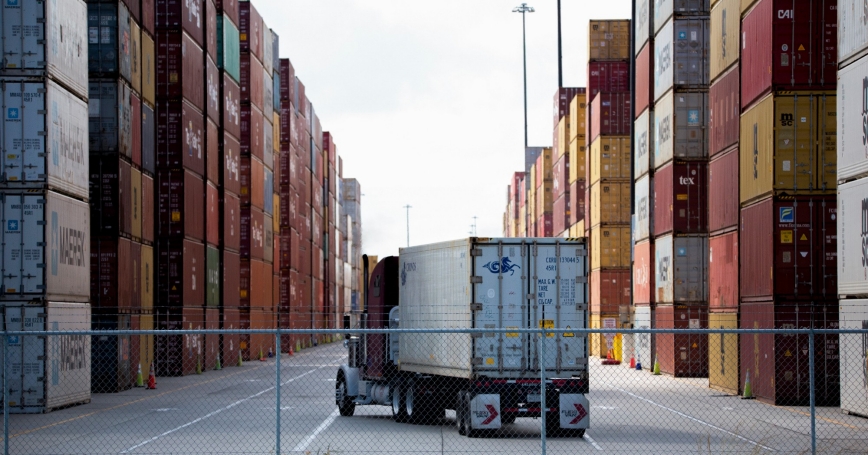 An eighteen-wheeler entering one of the main shipping container corridors at the Port of Houston in Houston, Texas, October 12th, 2021

By now the impacts of supply chain disruption are becoming all too familiar: shortages, inflation, factory closures, goods waiting at ports to be unloaded. All these impacts are serious enough, but another more-hidden concern lurks just beneath the surface: the impact of supply chain failure on national security, broadly defined as a nation's ability to protect and ensure the well-being of its population.

This definition of “national security” is broader than just the defense industry or military-related efforts; it also could encompass the very ability of a nation to ensure economic well-being, public health, and protection of a nation's key infrastructure. Supply chain disruptions cause general economic disruption and key commodity shortages, which then in turn can, in fact, drive aggressive national behavior and international instability. And ironically, this reactive aggressive national behavior can happen even if the health of a national economy itself depends upon continued international economic interdependence. Indeed, this very interdependence can create vulnerabilities. So a systematic effort, cutting across agencies and public and private sectors, could be one way to ensure these vulnerabilities are understood and mitigated.

Dispersed supply chains develop because actors find it's economically advantageous to seek the least-expensive and most-productive sources of supply. These dispersed chains develop for good reasons, but they create complicated interdependencies whose risks and vulnerabilities are sometimes not even understood, let alone mitigated.

While the reasons for creating these chains lie largely with private interest, the effects of disruption—which can come from sources ranging from malign human action to natural disaster—are rarely localized. When shortages occur in one industry, the disruptions in one area nearly always spill into adjacent companies and sectors. Whole economies feel the impact, not isolated actors.

Historically, nations have not yet resorted to war to ensure supply chain security, but it might be a mistake to assume that such action could never occur when circumstances become sufficiently dire.

The impact on vulnerable populations may be particularly dire. Supply chain disruptions do not just create higher prices and shortages among high-end consumer products, such as cars. They also affect more-basic commodities such as generic drugs or energy, increasing the cost of living and the provision of basic needs.

This kind of disruption can create instability more generally, promoting conditions for conflict between and within nations. For the most part, nations try to maintain access to markets and resources by peaceful means such as stockpiling, direct investment in partner nations, and use of other financial incentives. However, there is no guarantee that such competition will remain peaceful.

As affluent nations and individuals can find ways to mitigate shortages, they may create blocs of “haves” and “have nots,” where some actors have enough but others cannot meet basic needs. “Haves” may find ways to more directly change distribution, most likely at the expense of other “have nots.” Or “have” nations may try to forcefully safeguard what they have gained and work to exclude competitors. In all these cases, the actors are facing shortages, occasioned by interdependence, and seeking security for themselves in ways that actually promote wider international systemic instability.

In some cases, supply chain disruptions can have an even more-direct impact than general disruption, causing shortages of commodities the nation must have to ensure national security. This kind of disruption can go beyond matters of justice, equity, and general prosperity to threatening a nation's very ability to defend itself and look after its citizens. Some examples are pharmaceuticals and personal protective equipment, energy, food, raw materials used in manufacturing, and semiconductors used in multiple different systems including military applications. Such shortages can make the need for a national government to act more dire and immediate and thus raise the risk of conflict. In some cases, particular types of raw materials only exist in certain places, so shifting to more-secure sources isn't even possible.

Supply chain disruptions create both leverage for some nations and reasons for other nations to minimize leverage. For example, Taiwan currently dominates the market for semiconductors, which in some respects gives it leverage with other actors, including the mainland People's Republic of China (PRC). Semiconductors are capital-intensive—a new fabrication facility for semiconductors costs approximately $4 billion, with some estimates as high as $12 billion, and can take three or more years to build.

This does not even account for the skilled labor, and points to the difficulty of readily shifting production. As a result, Taiwan gains considerable leverage over the PRC and indeed the world. However, this very dominance, plus its proximity to the PRC and its dependence on the PRC for other commodities, may in fact raise the incentive for the PRC to take aggressive military action to ensure access to a key commodity. Such action could range from a “quarantine” to military threats to an actual invasion.

Aggressive action may stop well short of outright war, yet still be very dangerous for actors in the system. The problem of security vulnerability overall is complicated by the complexity and spread of supply chains across the world. A nation might not be able to successfully secure a commodity just by aggressive action against a single other nation. However, that action against another nation certainly could have the unintended effect of causing supply chains to fail in a more general manner. Aggressiveness, while understandable and probably predictable, might therefore also be extremely dangerous and unproductive.

Nations have gone to war in the past over natural resource shortages or in an effort to secure key markets and labor pools. The need to secure resources and markets was an explicit premise in German and Japanese actions leading to World War II. Such conflict has occurred even during times of significant interdependence between nations, such as in the European system prior to World War I. Historically, nations have not yet resorted to war to ensure supply chain security, but it might be a mistake to assume that such action could never occur when circumstances become sufficiently dire. Interdependence does create incentives to cooperate to avoid disruption, but may offer few alternatives for some desperate nations if some part of the interdependent chain is broken.

Supply chain interdependence is a fact of life. It is very unlikely to change in the next decade. However, with interdependence comes risk, and in the case of supply chains, often risks that are not fully appreciated. In addition to the risks generated by competition in the international system, there are also external shocks—such as natural disasters—which could rapidly make the systemic challenges unendurable, which might then become a national security issue in the most extreme sense.

A key point is that market mechanisms may not in themselves eliminate the incentive to conflict. These supply chain disruptions often come from markets failing in some way—perhaps because of some large collective event such as a disaster or pandemic—and thus the resulting problems require a collective action to truly solve them. In short, this means that some actor or actors outside the market may have to find solutions, which preferably avoid conflict—and the counterproductive added disruption that inevitably follows—by early identification of issues. Addressing these challenges may first require a clear understanding of the nature and root causes of the disruptions, as well as a set of organizational constructs that would allow a wider set of public and private sector actors to craft an effective approach. Identifying options quickly and thus working to minimize the causes of conflict could be essential.

Bradley Martin is director of the RAND National Security Supply Chain Institute, and a senior policy researcher at the nonprofit, nonpartisan RAND Corporation.