With the Ukrainians, Avoid the Mistakes of Other Refugee Crises 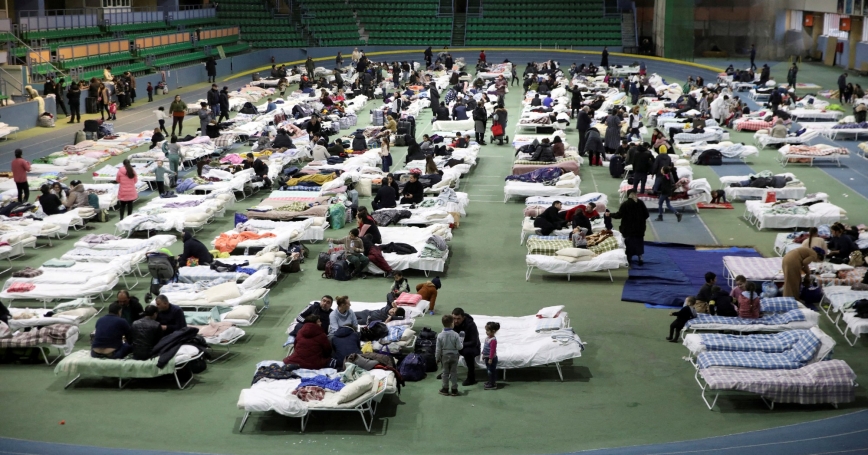 A month into Russia's invasion of Ukraine, 3.7 million Ukrainians have fled the country as refugees. A total of 10 million people—1 in 4 Ukrainians—have left their homes, including those who are now internally displaced. This is one of Europe's biggest mass migrations since World War II.

The refugee crisis will most likely be long term. Our 2021 RAND study found that a decade after a conflict ends, only about 30 percent of refugees on average return to their countries of origin. Unless there is a quick cease-fire and resolution of hostilities, then the majority of people fleeing Russia's war today could very well become permanent Ukrainian populations elsewhere in Europe.

At this critical moment, European Union countries have an opportunity to avoid some of the worst pitfalls of how the world has handled other refugee crises. Instead of instating policies based on the flawed assumption that refugees just need temporary humanitarian solutions until they can go home, as many host nations have done in the past, EU countries should create policies that give Ukrainian refugees some level of stability for the medium term and support the communities that host them. The actions that the EU takes today could even put forth a better model for the world's future refugee crises.

So far, the EU has said it will provide Ukrainians temporary protection status for a year, with possible renewal for up to three years, which will give them the ability to work and access social services without having to apply and wait for asylum. This is an important first step—but others will also be needed.

Unless there is a quick cease-fire and resolution of hostilities, then the majority of people fleeing Russia's war today could very well become permanent Ukrainian populations elsewhere in Europe.

First, EU countries should see the purpose of refugee camps as temporary help for people fleeing—not as long-term housing. Camps—which are being established in the border countries of Moldova, Slovakia, and Poland—are necessary to initially shelter the influx of refugees. So is other temporary housing, such as in sports facilities or churches. Yet camps tend to morph from temporary housing into long-term, squalid slums that endure for years or decades, where people languish waiting for conflict resolution that may never happen. Examples include “hotspots” the EU established in 2015 on Greek islands, which house some 14,000 refugees from the Middle East; the decade-old Zaatari camp that is home to 80,000 Syrian refugees in Jordan; Kenya's 30-year-old Dadaab camp with more than 230,000 people; and the 58 Palestinian refugee camps in multiple countries serviced by the United Nations since 1950.

A better approach in this situation would be to focus on helping Ukrainians move out of camps or other temporary situations quickly and into communities. Several EU countries are providing transit support onward from the border, but they should place additional emphasis on systematically helping Ukrainians locate housing in other communities so they can spread out across Europe.

If Ukrainians will be in other European countries for years, their ability to work, support their families, and have the security and dignity that come from independent finances will also be critical. The 2018 U.N. Global Compact on Refugees (PDF) highlighted the importance of fostering self-reliance in refugees. But current policies in many countries make this difficult: For instance, Lebanon, Kenya, and multiple other countries restrict refugees' ability to work out of concern that they will compete in the labor market with host country nationals or that permission to work will lead to a level of permanence. In addition, some EU countries prohibit refugees from working while waiting on their asylum cases. This confines refugees to poverty and dependence on humanitarian aid.

A 2018 RAND study found that employment for refugees can lead to win-win solutions in labor markets if refugees can meet market demands. Today, parts of Europe have labor market shortages in sectors such as information technology, health care, hospitality, and transportation due to an aging workforce, shrinking population, and COVID-19 resignations. For example, Spain needs half a million construction workers, Germany has said it will need to import 400,000 workers per year to fill labor market gaps, and Poland and Hungary both face a chronic shortage of workers. Ukrainians could contribute to filling those needs.

Yet there is a risk that Ukrainian refugees will not end up where the available jobs are, which recent decades have shown is all too common in refugee situations. Syrian refugees in Turkey, for instance, have stayed in the border areas near Syria or migrated to large cities while jobs in secondary cities have gone unfilled. And in the EU, refugees and asylum-seekers from the Middle East and Africa have congregated in towns with low-cost housing, which often also have weak labor markets, or are required to live in a particular region (PDF) without the right to move (PDF) to a place with more-plentiful job opportunities.

To address this risk with Ukrainian refugees, EU governments and U.N. agencies should coordinate to match Ukrainian workers to locations with strong labor market demand. Sweden could provide a model here: It addressed this in the 1990s through a refugee dispersal policy (PDF) that took into account local labor market conditions when assigning refugees to provinces, thereby increasing employment rates and reducing poverty. And the private sector could play a role it has yet to fully take on in refugee settings, where business associations and large employers coordinate to form a matching and recruitment process for Ukrainian refugees.

The EU should also create a plan for managing the needs of Ukrainian refugee children. Ukraine has prohibited men of fighting age (18 to 60) from leaving the country. Most Ukrainian refugees are thus children, women, and older adults. Children make up about half of those fleeing, and the United Nations is already reporting unaccompanied children.

If Ukrainians will be in other European countries for years, their ability to work, support their families, and have the security and dignity that come from independent finances will also be critical.

These children will need additional social support and should be integrated into public schools. Not acting quickly could mean that many remain out of the classroom during critical periods. Globally, half of refugee children are not in school, with higher rates of access in primary school. (Only a third are enrolled in secondary school.) Younger children can more easily adapt to a new language, setting, and curriculum than older children, who often drop out of school to work to help their families.

One major barrier to refugee education globally is simply not having enough buildings and teachers to provide every child a spot. In this case, the sheer logistics of getting so many Ukrainian children into school quickly can be a challenge. Already, some cities, such as Warsaw, Poland, are facing rapid school enrollments for Ukrainian refugees and a shortage of spaces.

Some Ukrainian children could take existing vacant school spots. But areas experiencing a sudden increase in school population from refugees, such as eastern Poland, may need a rapid expansion of classroom space and the teacher workforce. It's been done before: Prefabricated temporary buildings and double shifts (with one cohort in class in the morning and another in the afternoon) have provided stop-gap solutions for Syrian refugees in the Middle East and after hurricane damage led to school closures in the United States. In this case, an immediate hiring of teachers may be necessary; although modeling numbers of teachers needed is complex and depends on many factors, a back-of-the-envelope calculation is that 1.5 million school children, with 30 students per class, would require 50,000 more teachers.

But space isn't the only problem. After the 2015 migrant crisis, the EU put in place efforts to integrate migrant children into public schools, but underachievement, language acquisition, and social inclusion remained persistent challenges—similar to those faced by asylum-seeking and undocumented children crossing the U.S. southern border.

To address these issues, the EU should aim to meet both academic and nonacademic (such as psychosocial and legal) needs. It can achieve this by creating newcomer programs that provide students with time outside of typical classrooms to learn the new language, placing bilingual adults in classrooms to support teachers, facilitating connections with community legal and health providers, and instating agreements for educational records transfers from students coming from Ukraine. EU ministries of education could start now by considering the organizational, fiscal, and workforce needs for such an expansion in targeted locations. U.S. troops could even provide support with logistics by setting up the many thousands of temporary classroom buildings needed.

And perceptions and realities in host communities matter. EU countries need proactive planning to avoid a situation where some communities, especially those neighboring Ukraine, feel overburdened. Recent history has shown that places with large refugee influxes, such as Columbia, Turkey, Lebanon, Sweden, and Morocco, can reach a tipping point (PDF) once communities are overloaded, even when they share cultural similarities with their refugee populations and were welcoming at first. Locals can easily come to resent increased rental housing costs, new waits for medical treatments, crowded classrooms, strained public transportation, and overburdened sanitation systems. Indeed, Warsaw and other cities in Poland are already showing signs of being overwhelmed, with a shortage of available housing, limited budgets to meet emergency needs, and not enough professionals to help people who have experienced trauma.

Helping Ukrainians spread out among communities, investing in public services in communities with many refugees while not ignoring the needs of the host communities, and countering harmful disinformation by providing accurate information on the actual effect of refugees on the host country's finances and social systems could all help to reduce these strains on social cohesion.

Ukrainians have already become one of the largest refugee populations in the world. But policymakers and analysts have learned a lot about how caring for refugees and host communities can go wrong, and there are clear steps they can take to mitigate such risks. Deliberate action can—and should—go a long way toward making this situation right.

Shelly Culbertson is an expert on forced displacement and the associate director of the Disaster Research and Analysis Program at the Homeland Security Research Division of the nonprofit, nonpartisan RAND Corporation.

This commentary originally appeared on Foreign Policy on March 25, 2022. Commentary gives RAND researchers a platform to convey insights based on their professional expertise and often on their peer-reviewed research and analysis.