Might Russia Turn to Terror Bombing Civilians in Ukraine? 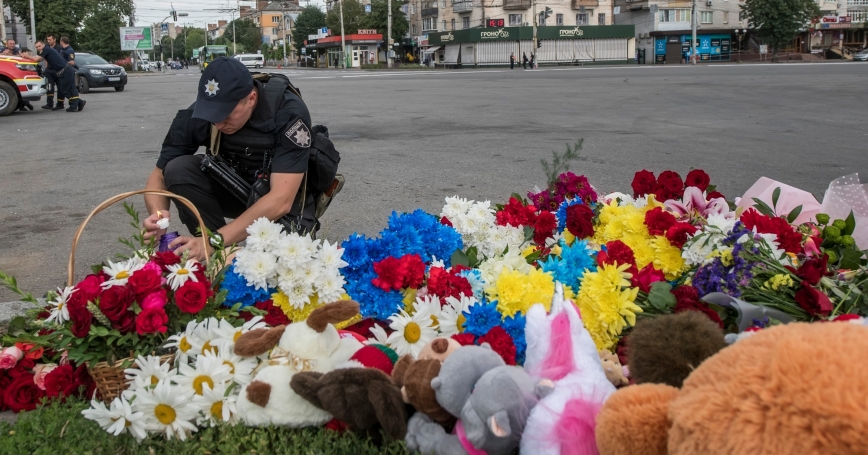 A Ukrainian serviceman lights a candle at the spot where a child was killed by a Russian cruise missile strike in Vinnytsia, Ukraine, July 15, 2022

Recent Russian missile attacks against civilian targets in cities far away from the front lines have killed scores of Ukrainians, leading to widespread outrage. These events raise the question of whether the war in Ukraine is entering a new phase in which terror attacks might become common.

Russia insists that it strikes only at military targets. This may generally be their intent—if one defines military targets broadly to include urban areas in the Donbas or other areas where Ukrainian forces resisting the Russian invasion are suspected to be, or might be at some point in the future. Missiles have struck civilian buildings elsewhere across Ukraine, but it is often difficult to distinguish deliberate attacks from those that were aimed at civilian targets because of faulty intelligence, or those that missed intended military targets because the weapons were inaccurate or were fired with little regard for where they landed. This problem is growing more severe as Russia runs low on newer, more-accurate missiles and draws on its stockpiles of older munitions.

Even if Russia were only aiming at military targets this would not make its actions legal. The laws of war not only prohibit deliberately attacking civilians, they also proscribe attacks against military targets that can be expected to cause harm to noncombatants out of proportion to the military value of the action—the classic classroom example is that you are not allowed to destroy a crowded apartment building in order to kill a sniper on the roof. Thus lobbing salvos of unguided rockets indiscriminately into urban areas from long range, or launching obsolescent anti-ship missiles at cities when the weapons' radar might or might not lock on to something of military value instead of a hospital or a university building, is not accepted by international law, even if the nominal target would otherwise be legal to attack.

Russian leaders appear to have little concern about causing civilian casualties and may even regard doing so as a useful drain on their enemy's resources and morale.

Russian leaders appear to have little concern about causing civilian casualties and may even regard doing so as a useful drain on their enemy's resources and morale, but during the initial months of the conflict they have mainly used air power and missiles in ways that appear intended to contribute to defeating Ukraine's armed forces. Appalling as they are, major attacks on civilian targets outside of eastern Ukraine have generally been sporadic strikes by small numbers of missiles. However, it is possible Vladimir Putin could resort to a strategy of maximizing civilian harm and terror if gaining a satisfactory outcome on the battlefield appears out of reach, or if Russia achieves its territorial objectives but Ukraine refuses to accept the situation and continues to fight.

History is replete with frustrated belligerents who turned to attacking civilians in the hope of breaking their adversary's will to resist or coercing their leaders to surrender. However, such campaigns rarely achieve (PDF) their intended objectives. Governments and populations almost always prove resilient under aerial bombardment when national survival or other vital interests are at stake, from Britons and Germans facing area bombing or V-1 and V-2 missile barrages in the World Wars to Afghan villagers being carpet bombed by the Soviets or Iranians and Iraqis during the “War of the Cities.” The rare exceptions when states have surrendered to spare their people further harm from bombs and missiles have been cases where the stakes were lower, or the inevitability of defeat was so unmistakable that enduring the enemy's attacks appeared pointless.

Such a strategy would almost certainly fail in Ukraine. In addition to facing the defiant nationalism of the Ukrainian populace, Russia also currently lacks the conventional military capability to conduct a massive punitive air campaign against the bulk of Ukraine that lies beyond the range of its artillery. Russia's bombers are deterred from penetrating into Ukrainian airspace by the air defenses that it has been unable to defeat, and its remaining inventories of long-range missiles that can reach deep into the country are limited.

Russia can, of course, inflict greater damage and cause more-horrifying deaths with the weapons it does have, and Kyiv and the West should consider the possibility that it will intensify such attacks. A pattern of events like the recent attack on Vinnytsia that killed 25 civilians can be expected to provoke growing outrage. This might lead to calls for Ukraine's government to retaliate in kind against Russian targets, although Kyiv would presumably resist the impulse knowing that Moscow would likely welcome a response that would play into its claims that it is waging a just war.

It is possible Vladimir Putin could resort to a strategy of maximizing civilian harm and terror if gaining a satisfactory outcome on the battlefield appears out of reach.

Increased attacks on civilians might also intensify pressure on Ukraine's Western supporters to provide additional air defenses to protect its cities against cruise missile attacks, following on the recent U.S. decision to send two NASAMS missile batteries to Ukraine for this purpose. Many more such systems could be needed to provide a measure of additional protection to all the cities across Europe's largest country that Russia can choose to attack. A revival of calls for a NATO no-fly zone over Ukraine to intercept cruise missiles is also possible, although the concerns about escalation that scuppered this idea early in the war would mostly still apply.

Punishing enemy civilians during a war in the hope that doing so will lead to a victory that cannot be achieved on the battlefield is a tradition with a long and grim history. Such strategies almost invariably fail when the enemy is fighting for something important, but even leaders less ruthless than Putin often turn to them when they are desperate or frustrated. Russia could ultimately follow this path in Ukraine.