Obstacles to Lasting Peace Between Ukraine and Russia 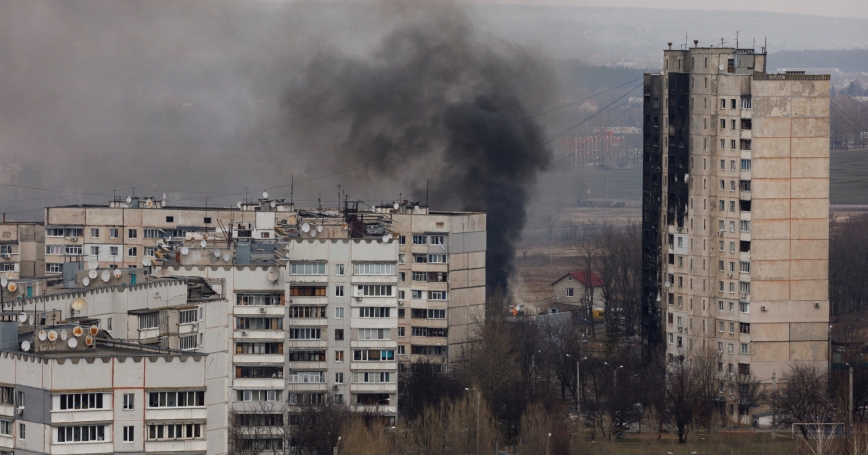 Smoke rises from a residential building after shelling from Russian positions in northern Kharkiv, Ukraine, March 31, 2022

The trajectory of Russia's ongoing war against Ukraine is hard to predict. But the current combat situation suggests that neither side will be able to achieve a decisive military victory that settles the disputes that led to the war. Ukraine and Russia theoretically could reach an agreement to stop the fighting, but the politics between the two sides—and centuries of confrontational history—do not suggest a lasting peace.

Even if Russia achieves its objectives of securing influence in southeastern Ukraine, the Kremlin won't have a government in Kyiv to support Russian national interests. Without control of the capital, Russia cannot reliably effect its desired strategic change. Russia accused Ukraine of failing to implement the 2014–15 Minsk agreements to end fighting in the Donbas; will it now, after decimating the country, trust the government in Kyiv to honor some new agreement? Will leaders in Kyiv have any confidence in a peace agreement reached with a government in Moscow that does not recognize its sovereignty and territorial integrity? Both seem implausible at present.

Ukraine risked this war because of its ambition to be a formal, integrated part of the West. Having made such a great sacrifice, it is unlikely to give up on that vision regardless of whatever settlement might be agreed to under duress. Were Ukraine to accede to Moscow's demands on remaining neutral or hosting foreign troops, the Ukrainian government and population will be more anti-Russian than before the February invasion. Ukraine likely would continue to tack west, and many European countries and the United States likely will attempt to counter Russian influence by supporting that move in every respect possible.

For Russia, this war isn't exclusively about keeping Ukraine out of NATO. It's about securing influence in Ukraine for the long term.

Will Russia simply accept this reality in the years to come? Not likely. For Russia, this war isn't exclusively about keeping Ukraine out of NATO. It's about securing influence in Ukraine for the long term. After all, a strong majority of Ukraine's population was not interested in NATO membership in the early 2010s; it was interested in political and economic ties to the West. That was also unacceptable to the Kremlin and resulted in the seizure of Crimea in 2014 and Russia's stoking of the separatist movement in the Donbas region.

The Kremlin also has framed the current invasion to the Russian population as a war against Nazism. Such rhetoric could make a compromise agreement with the current government in Kyiv unpopular, particularly among Russia's national security community. In Russia there is a strain of thought that any deal with Ukrainian President Volodymyr Zelensky would be devastating for Russia as a great power—although this narrative is short on ideas about how Russia might actually achieve total victory under the current circumstances.

At some point, the situation on the ground might dictate that Moscow strike a deal with the Zelensky government. But that won't change the Kremlin's desired end game: the establishment of a friendly Ukrainian government that will pursue closer relations with Russia.

This war is unlikely to end with a compromise peace settlement that does not address the fundamental political grievances at the heart of the Ukraine-Russia confrontation, which for Russia go beyond Ukraine's neutrality and the presence of foreign troops. It will come to a close only once one capital accepts the vision of the other. Either Moscow by force of arms will consolidate a genuinely Russia-friendly regime in Kyiv that accepts its demands, or there will be a different regime in Moscow that does not see Ukrainian integration with the West as a strategic threat. Otherwise, even after all the bloodshed and destruction over the past eight years, the politics appear intractable.

Clint Reach is a policy analyst at the nonprofit, nonpartisan RAND Corporation who works on Russian military capabilities and strategies.

This commentary originally appeared on Santa Monica Daily Press on July 6, 2022. Commentary gives RAND researchers a platform to convey insights based on their professional expertise and often on their peer-reviewed research and analysis.