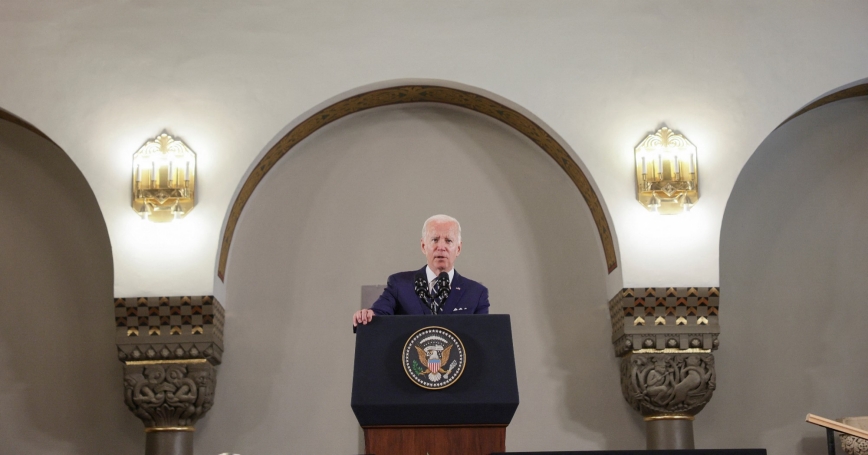 by Jonathan B. Lincoln

Following the much-discussed presidential visit to the Middle East, there seems to be at least one point of consensus concerning the stopover in Israel and the occupied West Bank last month. The president didn't really need to travel all the way from Washington to tell the Israelis and Palestinians that the time isn't right to restart a peace process. First and foremost, there are deep internal political divisions on both sides with Israel heading to its fifth election in four years this November, and an ever-widening political, social, and economic gap between a Palestinian Authority administration in parts of the West Bank and a Hamas-ruled Gaza Strip. Add to that heightened rhetoric, tensions in Jerusalem over holy sites, the constant potential for violence, as seen in Gaza earlier this month, and it all adds up to a context that is barely conducive for a phone call between leaders let alone peace talks.

But Biden did visit, and unlike his predecessors over the last four decades or more, he didn't come with a specific plan to resolve the conflict. His primary goal was clearly to reassert U.S. leadership with traditional allies in the Arab world, and how well he did that, if at all, is a matter of debate. But while the bulk of the post-trip analysis was focused on the Saudi part of the visit, there are a few points worth highlighting from the Israel/Palestine portion that may be important to keep an eye on. Indeed, you might need to strain that eye a little, but one could say that the president laid a small but important foundation for the potential re-engagement of the United States in the effort to resolve the conflict. In this respect, Biden and his advisors are looking at ways to improve U.S. relations with the Palestinian people and the Ramallah-based Palestinian Authority; renew and, where possible, increase assistance to the Palestinians in areas such as the East Jerusalem Hospital Network that can improve living conditions; and finally, to make use of congressional funding to revive some form of peacebuilding that can adapt to the current context. But even these “practical” steps will not come easily, and on their own are unlikely to fundamentally change political realities on the ground. Nevertheless, it may be worth a closer look at the visit and what it might mean for U.S. engagement going forward.

Biden's primary goal was clearly to reassert U.S. leadership with traditional allies in the Arab World

Breaking from the Trump Years

Biden's meeting with Palestinian President Mahmoud Abbas marked the long overdue reset of U.S. relations with the Palestinian leadership. This comes after a breakdown in relations and a cutoff of all assistance during the Trump administration. For many, the renewal of assistance without reversing Trump policies such as the recognition of Jerusalem as Israel's capital, amounts to a change in tone only. But while a renewal of talks is unlikely, Biden appears more comfortable dealing with both sides, in contrast to the approach of his predecessor, and some of the president's statements were aimed at endearing him to both sides. Biden reiterated his conviction that he is a Zionist, noting that one not need be Jewish to be a Zionist. At the same time, Biden also invoked his Irish ancestry, noting that his background “was not fundamentally unlike the Palestinian people” in their struggle against oppression.

For the Palestinians, Biden announced some $316 million in assistance as well as several measures apparently agreed to by Israel aimed at improving daily life in the West Bank. He also noted his support for a two-state solution “along the 1967 lines,” a crucial reference point that Trump and his allies on the Israeli right sought to ignore. This perhaps made it easier for Biden to adopt the normalization processes between Israel and Arab states, which was a pillar of the Trump presidency's Middle East policy. In an effort to put his stamp on it, Biden spoke to the Palestinians about reinvigorating the peace process with the “momentum” generated from the new alliances being created by Israel and the Arab states. From the Palestinian perspective, the alliances between Israel and the Arab world are generally viewed with deep suspicion and even hostility. If Biden can find some dividend for the Palestinians, it might not only help improve the situation on the ground, but also help the Palestinian leadership repair its debilitating internal divisions and isolation within the region. This makes sense and, in any case, the much-coveted next step in the process, normalization between Israel and Saudi Arabia, seems for now at least linked to progress on, if not the full achievement of, a two-state solution. Palestinians will likely be watching to see if this was just rhetoric, or if there is something more substantive to follow.

Second, Biden's visit to the Augusta Victoria Hospital in East Jerusalem, together with the announced increase in U.S. assistance by $100 million, was significant and symbolic. It was also choreographed to coincide with an announcement of additional support from the Gulf, including $25 million from the UAE. Following the normalization with Israel, the UAE significantly reduced its support for the Palestinian refugees, so this announcement was not just unexpected, but indeed it also may have been intended to help improve dynamics between the Gulf States and the Palestinians, as referred to above. More concretely, the Palestinian-administered hospitals in East Jerusalem, which serve as the main point of referral for specialized health care for the Palestinian population of Gaza and the West Bank, have been teetering on the verge of collapse for a decade or more as a result of funding shortages and financial mismanagement. They are also among the only Palestinian institutions that Israel still allows to operate in East Jerusalem since it shuttered most of them in the wake of the second intifada. The expansion of U.S. support not only helps relieve an urgent humanitarian priority, but Biden's visit to a Palestinian institution in East Jerusalem may also have been intended to send a message of support to the Palestinian population in the city and beyond. This could be especially important given recent tensions in the city over Palestinian property rights and the status quo governing the holy sites at the Haram al Sharif/Temple Mount.

Third, President Biden made the point of announcing $7 million in grants under the Middle East Partnership for Peace Act (MEPPA), passed by Congress in 2020. Hailed as a potential game changer by advocates of peacebuilding and the two-state solution, MEPPA allocates a significant sum of $250 million over a period of five years, for USAID and the Development Finance Corporation to implement programs between Israelis and Palestinians. While the grants that the president announced in the fields of medical and technological cooperation are important and useful, they represent a drop in the bucket given the enormous funds at the disposal of MEPPA and in light of the poor record of peacebuilding efforts to date.

But the president's announcement may signal something more critical than the dollar amount of these programs and the other previously announced grants under MEPPA. It could reveal that the remaining and committed civil society actors on the ground are being heard with regard to their desire for a more practical approach. There is little appetite among Israelis and Palestinians for the social engineering style of peacebuilding of the 1990s, which is probably better suited to either a post-conflict or a close-to-an-end-of-conflict situation. Instead, there is a more down-to-earth approach brewing that still seeks to advance the possibilities for a solution to the conflict through engagement with both communities, but also through the promotion of practical economic, social, and educational exchanges, such as those announced by the president. Some of this is related to the decayed state of relations in general between Israelis and Palestinians, but is also a result of important shifts within Israeli and Palestinian society. On the Israeli side, peacebuilding efforts are viewed with skepticism at best and at worst as “anti-Israel” by partnering with Palestinian NGOs. On the Palestinian side, there is a strong suspicion of peacebuilding as a tool for “normalization,” meaning that it accepts the status quo, while Israel's military occupation and settlement enterprise continues. Nevertheless, advocates of practical exchanges have found a way to cut through the negative views on both sides. Programs like vocational training, medical exchanges, technology partnerships, and trade tend to have far fewer detractors than political advocacy groups.

MEPPA has the potential to be transformative if it can tap into the right segments of the Israeli and Palestinian populations and if it is accompanied by some political risk-taking on all sides.

Overall, MEPPA does indeed have the potential to be transformative if it can tap into the right segments of the Israeli and Palestinian populations and if it is accompanied by some political risk-taking on all sides. While the latter is unlikely to happen immediately in the current political climate, there have been some small changes within civil society that are encouraging. A large civil society conference sponsored by the Israeli and Palestinian group ALLMEP, was recently attended by ambassadors, including those from the United States, and seems to have not just increased visibility for these groups but also helped to renew interest including in donor capitals. The administration might therefore be open to support and advice from a variety of sources including the private sector, educators, youth, NGOs, civil society organizations, business associations, and local politicians on the ground. It could also reach out to different sectors of both societies including potential bridge-builders such as Palestinian citizens of Israel. The United States could also think about the longevity of its efforts and actively work to coordinate with other donor nations, including the United Nations and the European Union, that remained engaged throughout the period of the U.S. hiatus during the Trump years. This might be possible with a degree of creativity and a willingness to help cultivate innovation.

To be sure, none of this should be considered particularly groundbreaking. Moreover, it is unlikely that these steps, on their own, will be enough to overcome the deep-rooted cynicism and negative actions on the ground. At the same time, a concerted effort to help improve conditions, especially for the Palestinian people, could be welcome as long as it doesn't come at the expense of other meaningful political steps down the road. But whether the priority is to resolve, manage, or shrink the conflict, encouraging practical exchanges between the sides, helping shore up Palestinian institutions to better deliver services, and improving Palestinian relations internally, with Israel, and with the wider region, could be positive developments. How this is followed up on and whether it helps advance peace could in the end determine the Biden administration's legacy on the conflict.

Jonathan Lincoln is an adjunct international/defense researcher at the nonprofit, nonpartisan RAND Corporation and an associate adjunct professor at Georgetown University. He spent 15 years working with the United Nations in the Middle East and North Africa.