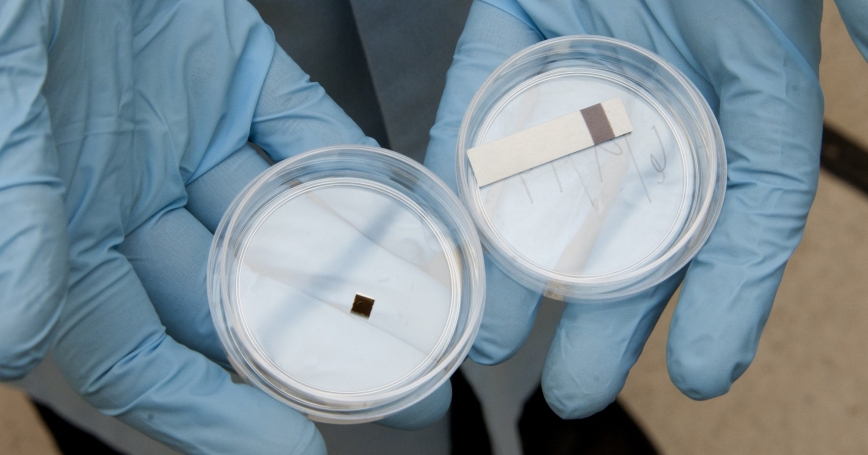 Biotechnology has a broad and often misunderstood scope, one with significant implications for today's warfighter. In many respects, biotechnology—and the bioeconomy more broadly—is still an emerging field, and this can exacerbate the already limited understanding of their scope. Despite a 2020 National Academies of Sciences, Engineering, and Medicine study that characterized the bioeconomy (PDF) as more than five percent of the U.S. gross domestic product (or $959.2 billion) in 2016, it is relatively young and often ill defined. It may have far greater potential than even these impressive totals would suggest. Furthermore, just as the technology is emerging, so too are the definitions that govern these areas. Fundamentally, however, biotechnology involves the manipulation of living organisms or their components to produce useful products. Meanwhile, the broader term, bioeconomy, is based on products, services, and processes derived from biological resources (PDF).

In addition to an unclear definition, public awareness (PDF), understanding, and acceptance (PDF) of biotechnology may sometimes be insufficient, and this presents yet another confounding factor. It makes gaining attention for these issues and developing proactive policies challenging. Policymakers may also underestimate what biotechnology entails or how important it can be. Yet, the field can provide a wide range of opportunities to the United States while also presenting challenges and risks. Mitigating these risks and capitalizing on the opportunities could provide substantial competitive advantages for the United States—but only if we better understand what biotechnology is.

Biotechnology involves the manipulation of living organisms or their components to produce useful products.

The broad implications of and use cases for biotechnology have emerged over many decades and ultimately impact national security and the individual warfighter. With the beginning of the genomic era and the discovery of the structure of DNA, humankind has increased its understanding of, experimentation with, and employment of biotechnology in a widening range of applications. This includes opportunities for improving the human experience and developing personalized medicine. In addition, biotechnology can help improve agricultural yields and develop novel ways to feed populations. It can offer opportunities in environmental remediation and industry, using modified organisms to mitigate polluted waterways and providing substitutes for industrial materials such as concrete. Benefits also include safer and healthier foods, cleaner manufacturing, disease treatment and perhaps even obsolescence, reduction of environmental pollutants, and harnessing of scarce natural resources. Furthermore, the broader bioeconomy also covers numerous commercial sectors, including pharmaceuticals, crop production, plastics and rubbers, as well as manufacturing and more.

The same applications that can support the rapidly emerging bioeconomy can have significant benefits for national security. Using engineered biomaterials can provide capabilities for rapidly preparing cantonment areas, building structures, and monitoring the environment. Defensive capabilities and the ability to sense attacks could be a priority in addressing these concerns. Of course, the potential for weaponization of biological material, either by states or non-state actors, remains an important concern that must factor into operational planning, as such attacks could negatively impact force health protection and mission readiness.

In addition, the warfighter will undoubtedly be impacted directly by biotechnology innovations, including capabilities specifically related to improving force health protection and mission readiness. Important examples of applications for improving performance encompass a variety of products that will ensure peak physical and cognitive abilities of the warfighter. Efforts to balance the human microbiome, which is important to both digestive and mental health, will be part of these enhancements. Optimizing warfighter performance will also include enhanced abilities to sense the environment. Furthermore, advanced neural interfaces are being developed that will improve cognition and decisionmaking skills.

While the human performance aspects of biotechnology offer great opportunities, the possibilities for industrial applications are perhaps equally as important. Biomaterials could be used to develop new reagents for next-generation explosives, harvest rare earth materials, enhance armor protection (including protection for the individual soldier), biobased construction for airfields, and develop specialized bio resins and polymers that offer increased performance in various applications. As the field of biotechnology continues to expand, still more useful applications are likely to surface.

Biotechnology is inherently dual use, meaning it could be used both for legitimate and nefarious purposes.

Biotechnology is inherently dual use, however, meaning it could be used both for legitimate and nefarious purposes. While the opportunities for combatting disease, cleaning up environmental pollutants, and harnessing scarce natural resources are positive outcomes, we should also be aware of the challenges and risks such as a rogue actor developing offensive biological warfare capabilities or the weaponization of pathogens to harm fragile biological ecosystems (perhaps through the inadvertent release of a modified species into the wild).

Making matters more complicated, today there is a growing number of organizations that directly consider biotechnology capabilities and the issues that can affect warfighters. These include the White House Office of Science and Technology Policy, the Department of Homeland Security, the Department of Defense (DoD), the Federal Bureau of Investigation, and an assortment of national labs, just to name a few. In addition, some organizations are increasingly active in the field of biotechnology, and their work can affect the warfighter indirectly—among them, the Department of Commerce, the Department of Energy, the National Institute of Health, the Department of Health and Human Services, and the Center for Disease Control. Though not comprehensive, this list demonstrates the depth and breadth of stakeholders that exist just within the federal government, and it highlights the potential risk of disparate and uncoordinated policies.

A Confluence of Factors

Given the breadth of applications and the history of relevance to the warfighter, the question arises as to why there should now be increased focus on biotechnology and why might policy considerations be especially important. Simply put, a confluence of conditions imposes a new sense of urgency and momentum in harnessing the field's relevance and benefits to the warfighter.

First, there is increasing competition (PDF) in this arena from “near peers” like China. China has spurred a significant increase in biotechnology research and development (R&D), with an anticipated increase of seven percent per year between 2021 and 2025. More specifically, China has made efforts to acquire international data that can facilitate assessment and control of health care for different countries, not to mention potential efforts to weaponize (PDF) various aspects of biological data. China's strategic investments in the United States are relevant as well. While the U.S. Government's Committee on Foreign Investment in the United States (CFIUS) provides a mechanism for monitoring investments that may threaten national security, its purview is incomplete. In particular, international companies that build facilities in the United States from the ground up are not subject to scrutiny. And WuXi Biologics is doing just that. Although the construction, associated tax base, and potential job creation can be appealing locally, the risk to national security could well go unnoticed and unregulated. Consequently, near peer competitors could gather data about U.S. technologies and citizens without being noticed.

Second, the DoD must maintain a strong biodefense program to address the risks of deliberate use of biological weapons. As biotechnology advances and proliferates, the DoD will need to keep track of how various capabilities could be used for nefarious purposes, including deliberate attacks against populations and deployed forces. For instance, despite existing international prohibitions on biowarfare, like the 1975 Biological and Toxin Weapons Convention, the United States still has questions about the intentions of actors such as China, Russia, North Korea, and Iran, each of which has active biotechnology programs. Engaging with the international community, including international partners and allies as well as those nations with questionable programs, could help protect the United States against threats.

Third, the COVID-19 pandemic has demonstrated that the United States is not prepared for a significant biological incident. To be sure, the problem is not new. But outbreaks and pandemics over the last decade, including Ebola (2014), Zika (2016), COVID-19 (2019–present), and now monkeypox, have demonstrated the degree to which we need to reevaluate our preparedness and response capability. This need extends to the DoD as well. The March 2020 outbreak on the aircraft carrier Theodore Roosevelt highlighted the challenges of maintaining force health protection and mission readiness in the face of a large-scale biological incident.

Finally, information and capabilities related to biotechnology have proliferated and are more readily available. This availability of data, technology, and capabilities (to governments and the public) has increased substantially over recent decades, and data availability in general is an increasingly prevalent factor concerning the warfighter. For example, an individual's DNA, can be mapped, stored, and used to assess a variety of personal information including susceptibility to various diseases and physical endurance and strength. New tools like CRISPR have become available in some high schools, which has democratized and deskilled biotechnology, making it more available to a wider array of people at less cost.

Given this confluence of issues, now could be the time for the U.S. government to plan ahead. To begin with, a greater degree of visibility into the various biotechnology applications being developed across government departments and agencies could be helpful. A broad and common understanding of the scope of biotechnology as it relates to the warfighter could facilitate more-coordinated discussions in this regard. Greater transparency and collaboration between government, industry, academic, and international partners may also be beneficial. The recent executive order and accompanying implementation strategy (PDF) go a long way in addressing these issues and help provide a common baseline for discussion.

Each organization that works with biotechnology faces unique challenges and needs, and thus may require unique management.

Hierarchy and deconfliction may be necessary. Today there are overlapping and perhaps even underlapping biotechnology areas that could be addressed to ensure proper cooperation and collaboration. There may be a need to balance centralized coordination with decentralized needs within the government. Each organization that works with biotechnology faces unique challenges and needs, and thus may require unique management. However, increasing higher-level coordination could net real benefits to the agencies themselves, as well as to the warfighter.

Finally, a greater synergy with the private sector may be necessary. Industry and academia will undoubtedly drive biotechnology R&D advancements of tomorrow. Promoting and supporting these leadership efforts, including the pace of development and innovation, will provide the DoD with the “inside track” on emerging technologies and their potential applications for national security purposes. One only need consider how government support of R&D was vital to the Human Genome Project. More recently, the government and DoD played a pivotal role in the success of Operation Warp Speed for COVID-19 vaccine development and procurement, employing such authorities as the Defense Production Act and providing funding to several of the vaccine developers.

Biotechnology may be reaching a critical junction. As it continues to mature, proactive policy becomes necessary for the federal government to leverage emerging capabilities effectively and remain competitive. Consistent communication, coordination, and collaboration may help retain this competitiveness and support today's warfighter most effectively.

Tim Marler is a senior research engineer at the nonprofit, nonpartisan RAND Corporation and a professor at the Pardee RAND Graduate School. Daniel M. Gerstein is a senior policy researcher at RAND and an adjunct professor at American University. He formerly served as the undersecretary (acting) and deputy undersecretary in the Science and Technology Directorate of the Department of Homeland Security 2011–2014.

This commentary originally appeared on Defense Dossier on October 25, 2022. Commentary gives RAND researchers a platform to convey insights based on their professional expertise and often on their peer-reviewed research and analysis.