Why Vladimir Putin Is Likely to Be Disappointed 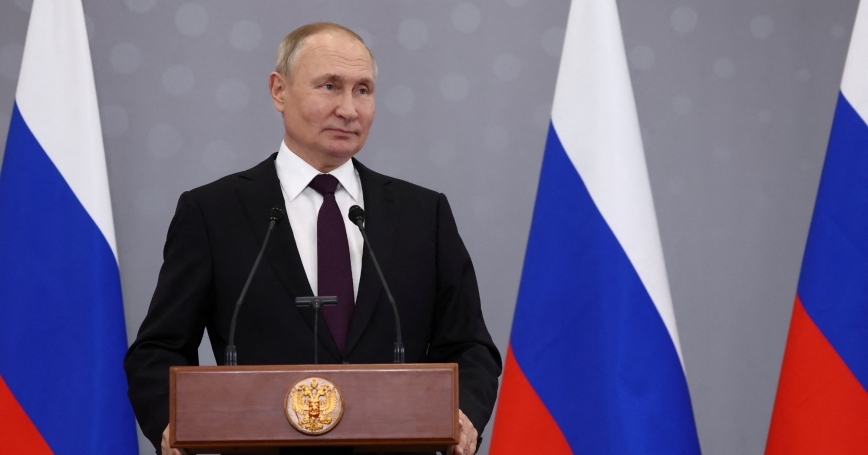 Against a turning tide, Vladimir Putin is resorting to desperate measures.

First, there was the mobilization order of 300,000 Russian citizens. Then came the illegal annexation of four Ukrainian regions and the appointment of a new commander, Gen. Sergei Surovikin, to lead the war effort. Last week, in retaliation for an attack on the Kerch Strait Bridge, Russia's main route to Crimea, the Kremlin launched over 100 long-range missiles into Ukraine, killing more than three dozen civilians and striking 30 percent of Ukrainian energy facilities.

But if Mr. Putin hoped to shift the war's battlefield dynamics, he is likely to be disappointed. Four factors have combined to steadily diminish Russia's battlefield prospects: the demands of a high-intensity war on an army unprepared to wage it; early and severe losses to its ground, airborne, and special forces; the Ukrainians' resilience and will to fight; and Western support for Ukraine. The fact is that none of the Kremlin's recent gambits—annexation, mobilization, or personnel shuffles—can overcome the larger problems facing Russia's military. And in the months ahead, its difficulties will only worsen.

Despite the risks involved in mobilization—how it reaches deep into the population, relying on an untested labor pool and older military equipment drawn from long-term storage—Mr. Putin clearly felt that he had no choice. The Kremlin delayed the decision for as long as it could, attempting instead to entice volunteers with cash bonuses and social benefits. But by September it did not have sufficient forces left to hold occupied areas in Ukraine. Successful Ukrainian counteroffensives, reclaiming thousands of square miles of territory, drove the point home.

Against a turning tide, Vladimir Putin is resorting to desperate measures.

Mobilization offers the chance for recovery, relieving Russia's depleted forces after nearly eight months of fighting. Yet it has not gone well so far. Evidence has emerged of mobilized infantry deployed piecemeal into Ukraine with just a few days or weeks of training; other groups will reportedly receive just a month of training. Even before the majority of new troops have been deployed, there are anecdotes of mobilized forces being killed, being captured, and deserting. There are, to put it mildly, obvious downsides to sending unprepared and questionably led conscripts to a combat zone.

That's not to say mobilized forces will be of no use. If used in support roles, like drivers or refuelers, they might ease the burden on the remaining parts of Russia's exhausted professional army. They could also fill out depleted units along the line of contact, cordon off some areas, and man checkpoints in the rear. They are, however, unlikely to become a capable fighting force. Already there are signs of discipline problems among mobilized soldiers in Russian garrisons.

They join an army already degraded in quality and capability. The composition of Russia's military force in Ukraine—as much of its prewar active duty personnel has been wounded or killed and its best equipment destroyed or captured—has radically altered over the course of the war. The Russian military leadership is unlikely to know with confidence how this undisciplined composite force will react when confronted with cold, exhausting combat conditions or rumors of Ukrainian assaults. Recent experience suggests these troops might abandon their positions and equipment in panic, as demoralized forces did in the Kharkiv region in September.

That does not bode well for Russia's plans on the battlefield. Right now, Mr. Putin seems to have two immediate goals: to sustain control of as much of the occupied Donetsk, Luhansk, Zaporizhzhia, and Kherson regions as he can (with Russia's desired boundaries not yet defined); and to freeze the front line, establishing a frontier Ukrainian forces cannot broach, possibly sealed by a cease-fire. That would enable a more-sustainable defense, as well as allow the military to rotate troops and regenerate its forces. Ukraine and its supporters, of course, have made it clear that neither of these conditions is acceptable. And as the Ukrainians' continued headway in the south suggests, it's far from clear that Russia will be able to attain either aim.

In that case, Mr. Putin could lash out more broadly against Ukraine. The attacks of the past week—particularly striking critical civilian infrastructure—could be expanded across Ukraine if missile supplies hold out, while Russia could directly target the Ukrainian leadership with strikes or special operations.

The Russian military leadership is unlikely to know with confidence how this undisciplined composite force will react when confronted with cold, exhausting combat conditions or rumors of Ukrainian assaults.

The Kremlin, reticent so far to escalate the war beyond Ukraine, could also aim to directly disrupt or deter foreign military assistance to Kyiv. Such efforts might involve attacks on NATO satellites or other reconnaissance assets, jamming or “sensor blinding (PDF)” them to render them temporarily or permanently inoperable. To inflict domestic costs on Kyiv's supporters, Russia could also conduct cyberattacks against Europe or the United States, targeting critical infrastructure like energy, transportation, and communications systems. The war then would no longer be confined to the borders of Ukraine.

Troublingly, Russian leaders and state-controlled media are already trying to reframe the war as an existential conflict between Russia and the West. Mr. Putin has gone so far as to threaten to use all available means—a thinly veiled reference to nuclear weapons—to defend “the territorial integrity of our country.” This threat, while serious, is, for now, only words. By the terms of Russia's own nuclear doctrine, neither Ukraine nor its supporters have posed a threat that would permit the use of nuclear weapons: Ukraine cannot attack Russia with a nuclear weapon, disable Russian nuclear forces, or launch a massive strike against Russia that would imperil the existence of the Russian state. It's worth recalling that, before breaking the nuclear taboo, Russia has other means available to escalate.

Mr. Putin's behavior, intended to show resolve, reveals his awareness that the war is going poorly and his options are shrinking. The months ahead are likely to be volatile, especially if—or when—Russia's gambits fail.

Dara Massicot is a senior policy researcher focusing on defense and security issues at the nonprofit, nonpartisan RAND Corporation. Before joining RAND, she analyzed Russian military capabilities at the Department of Defense.

This commentary originally appeared on New York Times on October 17, 2022. Commentary gives RAND researchers a platform to convey insights based on their professional expertise and often on their peer-reviewed research and analysis.