The Iran Protests: A Crossroads in Governance? 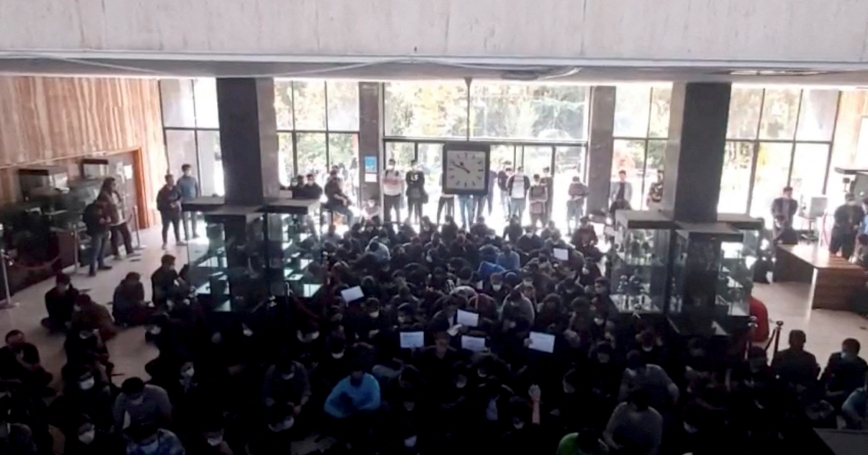 Protesters chant at a vigil for Mahsa Amini at the entrance hall of the Khajeh Nasir Toosi University of Technology in Tehran, Iran, in this screengrab from a social media video released October 26, 2022

Iran has seen large-scale protests in response to the death of Mahsa Amini, a 22-year old woman who died in the custody of the Iranian morality police on September 16. Her death sparked widespread protests in more than 80 cities within Iran as well as many more across the globe. But are these protests the spark that will usher in a democratic form of governance in Iran? While the protests occurring in Iran bear resemblance to past protests in Iran and across the Middle East, there are some differences as well.

The current anti-government protests are the longest since the protests of the Green Movement in 2009 which lasted six months. However, there are differences between the current protests and the largely peaceful Green Movement demonstrations, which sought the removal of President Mahmoud Ahmadinejad after an election many thought to have been rigged, and the current unrest. The Green Movement was a political movement that contested an election result, while today's protests are calling for a change in regime. Beginning largely as a feminist movement, the protests have evolved in the past month.

Anger over Iran's economic woes, combined with a strident feminist movement, may have contributed to intensified resentment and unrest.

Today—with a third of the population living below the poverty line, a shrinking middle class that continuously moves abroad for opportunity and high inflation—the economic crisis may be amplifying the constraints the Islamic system has placed on economic opportunity in Iran. Anger over the country's economic woes, combined with a strident feminist movement, also may have contributed to the intensified resentment and unrest.

The Green Movement though long lasting was quashed through force. Excessive force has been the hallmark of the Iranian security forces in suppressing anti-government protests and the current protests are no exception. The Iranian government is using a three-pronged approach: firing live ammunition, targeted arrests, and the restriction of internet services. The death toll ranges from as low as 40 people to 233 people. This number is likely to increase as the protests continue.

Ayatollah Khamenei broke his silence on October 3 blaming the West for the protests and issuing a warning that protesters will receive “harsh prosecution and punishment” for their “sabotage” of the Islamic Republic, which could lead to even more-severe use of force by security forces. It may be telling to see if the momentum of the protests is continuously sustained despite this severe form of repression.

In early 2012, a number of protests took place across the Middle East. At that time, it seemed the world was hopeful that this would usher in a new wave of democracy. However, those hopes did not lead to the establishment of democratic forms of government across the board. Tunisia was the only country that transitioned into a democratic form of government that has been sustained. Other countries, like Jordan and Saudi Arabia, made economic or legislative concessions in response to the protests. At the same time, some countries, like Iraq and Syria, descended into civil war.

The protests could lead to democratic governance, or they could lead Iran to a long drawn-out war, or neither.

Still, the Arab Spring showed possible paths the current Iranian protests may follow. The protests could lead to democratic governance, or they could lead Iran to a long drawn-out war, or neither. Concessions seem as unlikely now as they were during previous protests.

It is still too early to determine if the protests sparked by the death of Mahsa Amini will have a lasting effect on governance in Iran, but the first step seems to have been taken.

Karishma Mehta is a technical analyst at the nonprofit, nonpartisan RAND Corporation.