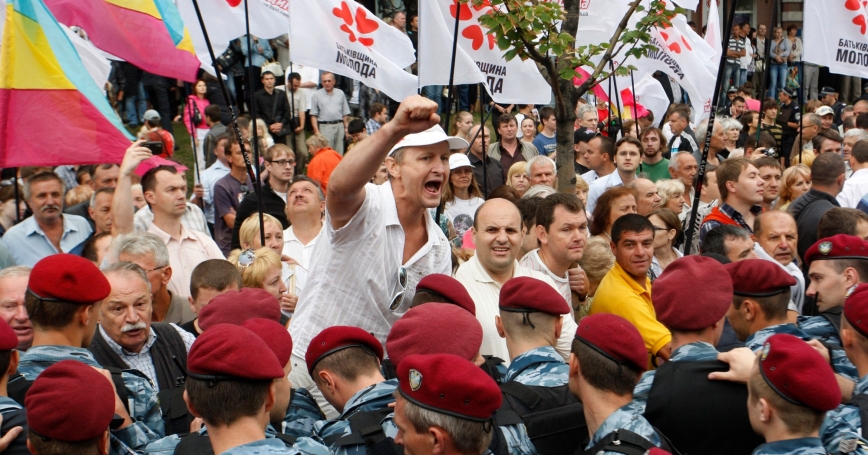 The recent start of the trial in Kyiv of former Ukrainian Prime Minister Yulia Tymoshenko, one of the leaders of Ukraine's Orange Revolution, on charges of abuse of power raises grave concerns about President Viktor Yankovych's commitment to democracy and the rule of law. In reality, it is his regime, not Tymoshenko, that is on trial, along with the European Union's willingness to stand up for democracy in a large and important neighbor.

As the EU and Ukraine launch another round of negotiations for a Deep and Comprehensive Free Trade Agreement (DCFTA), the EU should not repeat its mistakes in accession negotiations with Bulgaria and Romania, which most EU members believe were admitted prematurely, or with Belarus, where it failed to define impermissible behavior in 2008-2010. Instead, the EU should conclude the DCFTA and Association agreement with Ukraine only if the Yanukovych administration demonstrates clear commitment to European values.

Anchoring Ukraine inside a DCFTA and political association agreement would undoubtedly bring significant benefits to the country and strengthen its European ties. But these benefits should not come at the expense of turning a blind eye to the democratic norms that the EU claims to espouse.

During the 18 months since Yanukovych's election as president, the United States, the EU, the International Monetary Fund, the OECD, and other international organizations have published detailed reports about Ukraine's lack of progress in implementing economic and political reforms and reducing corruption. The IMF suspended its July 2010 standby program after Ukraine failed to implement a second round of reforms. Leading non-governmental organizations such as Freedom House and Reporters Without Borders have documented the country's steep slide away from democracy.

Last month, the EU unveiled a new and ambitious European Neighborhood Policy (ENP), which stated: "A functioning democracy, respect for human rights, and the rule of law" are fundamental pillars of the EU partnership with its neighbors. To continue negotiations with Ukraine at a time of slowing economic reform and growing official contempt for democratic norms would undermine the EU's claim to be forging a model for the ENP by upholding "European values" and standards in negotiations for a DCFTA and Association agreement.

The clearest example of the Yanukovich government's undemocratic methods is its repression of its opponents, which the European Parliament sharply criticized in a resolution issued on June 9. During the 18 months of negotiations, the Ukrainian authorities have added new criminal charges to existing ones against Tymoshenko and 12 members of her 2007-2010 government.

Many of the charges border on the absurd, while others are attempts to criminalize political decisions. For example, former Interior Minister Yuriy Lutsenko has been charged with having used government funds to pay for a Police Day holiday. Anti-tax protesters are accused of having damaged tiles on Kiev's Independence Square.

To maintain the credibility of its ENP policy, the EU should take three important steps. First, it should draw clear red lines regarding what constitutes impermissible behavior for the Yanukovych administration. The EU should make clear that Ukraine needs to demonstrate a tangible commitment to "European values" and standards.

Second, the EU should insist that Ukraine continue to abide by the conditions stipulated in its IMF program. This is important because Ukraine has only partly fulfilled IMF agreements that it signed in 1994, 2008, and 2010.

Finally, the EU should insist that Ukrainian authorities halt all politically motivated criminal cases and release those who are incarcerated for political crimes. Selective use of justice has badly damaged the Yanukovych administration's reputation. Steps in this direction would greatly improve the Ukrainian government's relations with the EU and the US.

These three steps would not resolve all of the difficulties in Ukraine's relations with the EU. But they would lay down important guidelines and help to insure inclusiveness and transparency in Ukraine's reforms process. They would also enhance the credibility of the EU's commitment to promoting democratic reform as a core element of the ENP, and provide a clear roadmap of the steps Ukraine must take before a DCFTA can be concluded.

It is not too late to bring Ukraine back to a democratic course. Most Ukrainians yearn for a European future and would turn against any government that precluded such a course. Yanukovich knows this. Does the EU?

F. Stephen Larrabee holds the Distinguished Chair in European Security at the RAND Corporation. Taras Kuzio is a Senior Fellow at the Center for Transatlantic Relations at the School of Advanced International Studies (SAIS), Johns Hopkins University.