A Year After Repeal of Don't Ask, Don't Tell 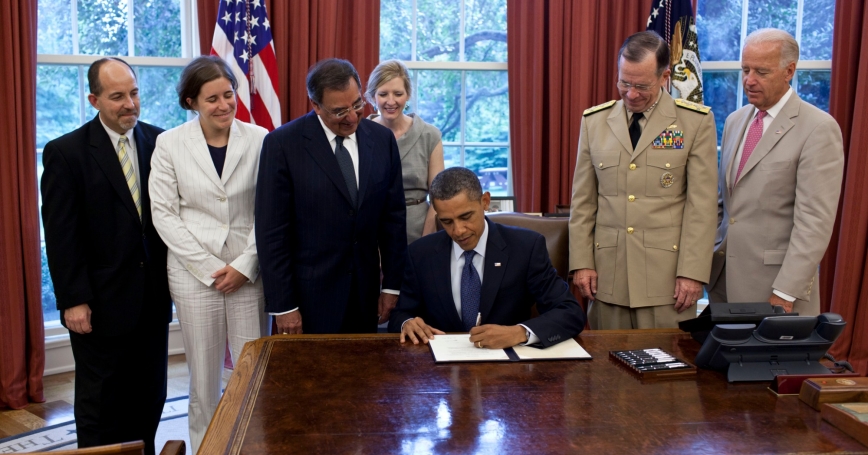 President Obama signs the certification stating the statutory requirements for repeal of "Don't Ask, Don't Tell" have been met

Today, September 20, is the first anniversary of the repeal of the law commonly known as "Don't ask, Don't tell (DADT)," which prevented gay men, bisexuals, and lesbians from openly serving in the Armed Forces of the United States. Repeal of DADT meant that military accessions, promotions, separations, and assignments would be made without regard to sexual orientation. As we mark this historic change, it seems appropriate to remember how it took place and assess what has transpired over the past year.

The first attempt to allow gays to serve openly in the military came in January 1993, during the early days of the Clinton Administration. The attempt and the political and social context in which it occurred are documented in the 1993 RAND report, Sexual Orientation and U.S. Military Personnel Policy: Options and Assessment. RAND's research concluded that sexual orientation, by itself, was not germane to determining who may serve in the military, and that clear standards of conduct strictly enforced for all military personnel should be sufficient to allow gay men and lesbians to serve. Yet the Defense Department, the Congress and, one can argue, the American people, were not ready to accept such a conclusion. What resulted was the compromise policy of DADT.

As envisioned by the Clinton administration, DADT would draw a distinction between sexual orientation and sexual conduct; the latter was still a bar to military service. However, Congress rejected the distinction, holding that merely knowing a service member was gay presented an "unacceptable risk" to military effectiveness. The issue seemed settled.

But in 2004 the constitutionality of DADT was challenged. Ambiguity in the law had made implementation problematic. In addition, although the number of service members discharged for sexual orientation increased immediately after DADT was passed, the number declined sharply as the U.S. went to war in 2002, and remained low throughout the decade. It appeared that gay service members were being allowed to deploy, thus undercutting the law's basic premise: knowing a soldier's sexual orientation might undermine unit cohesion and combat effectiveness. Outside the military, American public opinion now favored repeal.

In his 2010 State of the Union address, President Obama called for repeal of DADT; weeks later a similar call came from Secretary of Defense Robert Gates and Adm. Michael Mullen, Chairman of the Joint Chiefs of Staff. In February, 2010, during Senate Armed Services Committee hearings, Secretary Gates announced that he would ask RAND to update its 1993 report. Breaking with tradition, Adm. Mullen added "it is my personal belief that allowing gays and lesbians to serve openly would be the right thing to do. No matter how I look at this issue, I cannot escape being troubled by the fact that we have in place a policy which forces young men and women to lie about who they are in order to defend their fellow citizens. For me personally, it comes down to integrity—theirs as individuals and ours as an institution."

During the next ten months RAND supported the DOD Working Group, which focused on an unprecedented effort to take the pulse of the force. Hundreds of thousands of service members and their spouses participated in town hall meetings, small group discussions, and surveys. The vast majority felt that repealing DADT would have no impact on unit cohesion, combat effectiveness, morale, or retention. Those currently serving with a service member they believed to be gay were consistently the least likely to believe that repealing DADT would have negative effects.

As summarized in this Research Brief, RAND provided additional information on such topics as public opinion, experience of foreign militaries and domestic police and fire departments, impact on recruiting and retention, group cohesion, the opinions of serving gays, and implementation strategies.

What has happened since DADT was repealed? Despite the fears of some, but in line with the experience of every other institution, both in the US and abroad, that has experienced such a transition, there have been no significant problems. Consider the case of the United States Marine Corps.

In 2011, the Marine Corps Commandant predicted that repeal of DADT would result in widespread difficulties. But in late August 2012, he told a National Press Club audience that he no longer gets questions about openly serving gay personnel, and that he is "not seeing anything at all."

To be sure, there have been some incidents. However, an official of the Servicemembers Legal Defense Network, the largest gay advocacy group, has said they are pleased with how incidents have been handled at the local level. This pattern mirrors the experience of other militaries, as RAND reported in 1993 and reconfirmed in 2010.

Since repeal the DoD has taken decisive steps to make gay service members feel welcome. Recognizing June as LGBT Pride Month, Defense Secretary Leon E. Panetta said, "The successful repeal of "Don't Ask, Don't Tell" proved to the Nation that just like the country we defend, we share different backgrounds, different values, and different beliefs—but together, we are the greatest military force in the world."

Repeal has also profoundly affected the personal lives of currently serving gay personnel. One cadet at the US Coast Guard Academy we interviewed said: "The repeal of DADT was less like flipping a switch. It was more like a continuum; I progressed through my own comfort with being gay."

For a career Army officer the change has been more dramatic. One we interviewed described the stress of serving two decades living in guarded secrecy about his personal life: "It was the secrets, the trying to guard every word so that you don't use the wrong pronoun. Every single time I got called at home, regardless of the reason for the call, for a split second, I thought, this will be the call where I get fired. It was always in the back of my head. … [Now with repeal] there was this feeling of relief that not only do I now finally feel like a full-fledged citizen of this country—the country that I put my life on the line to defend more than once - but now I can do my job more efficiently."

Opposition to repeal has all but disappeared. In June, the outspoken Chairman of the House Armed Services Committee announced that allowing gay men and women to serve openly in the military is a settled issue. Legislators on both sides of the aisle have largely supported its repeal.

However, for many, the fight for full rights is not over. The battleground has moved on to securing benefits such as medical care and housing, which are not extended to gay service members' partners and denied to their spouses under the federal Defense of Marriage Act. This battle is likely to be decided in the courts as challenges to the act's constitutionality work their way to the Supreme Court.

Bernard Rostker, former Under Secretary of Defense for Personnel and Readiness, is a senior fellow at the nonprofit, nonpartisan RAND Corporation, where he was lead author of two landmark studies on the issue of gays in the military.