What Went Wrong in Afghanistan? Allowing a Sanctuary in Pakistan 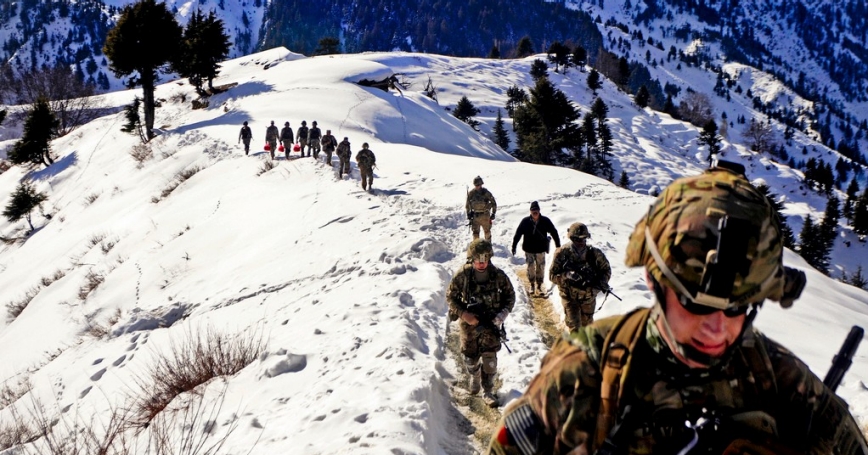 Afghan Border Police and U.S. Army Soldiers hike to an observation point along the Afghanistan-Pakistan border

In November 2010, while working for U.S. Special Operations Command, I traveled to the U.S. base in Shkin along the Afghanistan-Pakistan border. Several dirt roads snake through the area, but virtually none are paved. The dusty, parched landscape is strangely reminiscent of Frederic Remington or C.M. Russell's paintings of the American West.

Shkin serves as a microcosm of one of the most significant weaknesses of the U.S. war in Afghanistan: a failure to address the insurgent sanctuary in Pakistan. As U.S. officials pointed out at Shkin, the Taliban and other insurgent groups use their safe haven in Pakistan to live, train, rearm, and conduct strategic and operational planning.

More alarmingly, individuals from Pakistan's premier spy agency, the Inter-Services Intelligence (ISI), and the Pakistan military provide lethal and nonlethal support to Afghan insurgents. In fact, Pakistan is running one of the most successful covert-action programs today against a major power—and against the United States, no less. The U.S. failure to stop Pakistan is particularly egregious because the United States was involved in an almost identical program 30 years ago—with the ISI's help—against the Soviets in Afghanistan.

Islamabad's rationale for supporting Afghan insurgents is straightforward and, in many ways, understandable. Hemmed in by its archenemy, India, to the east, Pakistan wants an ally to the west. It doesn't have one at the moment. Instead, the Afghan government has developed a close relationship with New Delhi. Feeling strategically encircled by India, Islamabad has resorted to proxy warfare to replace the current Afghan government with a friendlier regime. With U.S. forces withdrawing from Afghanistan, Pakistan could get its wish.

Yet this outcome was not inevitable. The United States made three key mistakes along the way.

First, U.S. policymakers failed to develop an effective regional strategy that involved Afghanistan's neighbors. At the December 2001 conference in Bonn, Germany, U.S. and other Western diplomats pulled together the regional powers, including India, Iran, Pakistan, and Russia, to agree on a way forward in Afghanistan. They mutually supported the creation of an Afghan government led by Hamid Karzai and pledged international aid. After Bonn, however, there was no follow-on institution to ensure regional collaboration, and cooperation quickly devolved into security competition.

Second, the United States and Pakistan failed to target the Taliban sanctuary in Pakistan. The United States has conducted drone strikes in Pakistan's Federally Administered Tribal Areas. But senior Taliban leaders are located hundreds of miles south in Baluchistan province and Karachi.

Neither the United States nor Pakistan has targeted the Taliban's command-and-control network there. Instead, the Taliban's leader, Mullah Omar, is thought to reside in Baluchistan, well outside the area where drone strikes are occurring. The Taliban's inner shura, its most important decision-making body, has also been safe from U.S. strikes. The inner shura provides strategic guidance for the insurgency, exercises some command and control, and is the largest fundraiser. Baluchistan has been so safe for Taliban leaders that most have moved their families there and have sent their children to Pakistani schools, according to a range of U.S., European, and Pakistan officials I interviewed.

Third, U.S. and Afghan leaders failed to co-opt as many former Taliban leaders as they could after Bonn, sending them to prisons at Bagram Airfield or Guantánamo Bay. This was a mistake. The Taliban represented a faction of Afghan society that could not be indefinitely excluded from the country's political and economic life. Consequently, Taliban leaders, including several who were considering reconciling with the Afghan government, slipped across the border into Pakistan.

Standing at Shkin, looking into Pakistan, I had a sinking feeling that the war in Afghanistan might not be winnable without undermining the sanctuary. The odds are stacked against counterinsurgency success.

Afghan insurgents enjoy both outside support and sanctuary, a doubly difficult hurdle for the United States and its allies to overcome. Ten years after the United States helped overthrow the Taliban regime, it is remarkable that successive U.S. administrations have refused to target the Taliban safe haven in Baluchistan. The Soviet Union made a similar mistake in the 1980s when it failed to act against the seven major mujahideen groups headquartered in Pakistan.

In his book The Bear Trap, Mohammad Yousaf, who headed the ISI's covert war in Afghanistan against the Soviets, wrote that the insurgent sanctuary in Pakistan was essential to defeating the Soviets and winning the insurgency. Sadly, Yousaf's revelation remains just as true today.

Seth G. Jones of RAND Corp. is former senior advisor to the U.S. Special Operations Forces commanding general in Afghanistan. He is the author of In the Graveyard of Empires: America's War in Afghanistan.

This commentary originally appeared in Foreign Policy on March 1, 2013. Commentary gives RAND researchers a platform to convey insights based on their professional expertise and often on their peer-reviewed research and analysis.