Why Erdogan Wants Peace with the PKK 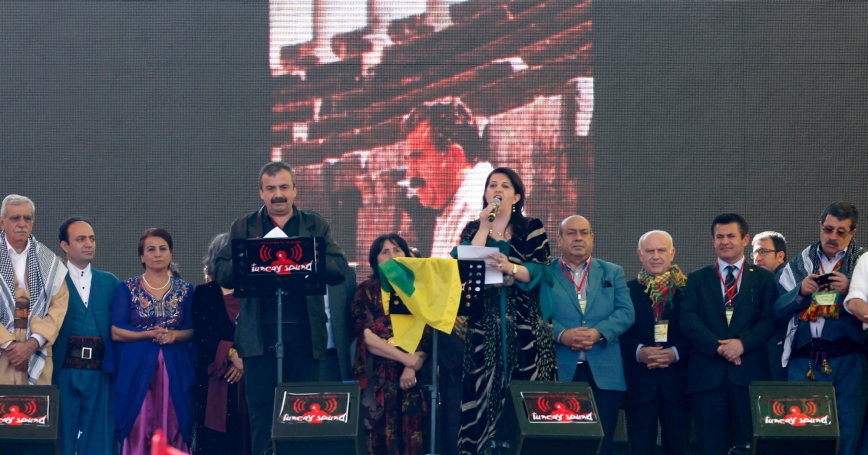 Pro-Kurdish politicians read the statement of jailed Kurdish rebel leader Abdullah Ocalan ordering his fighters to cease fire and withdraw from Turkish soil during a gathering to celebrate Newroz in the Turkish city of Diyarbakir on March 21, 2013

Last week, Abdullah Ocalan, the leader of the Kurdistan Workers' Party (PKK), declared a cease-fire in his party's nearly three-decade-long struggle with the Turkish state. Before then, the insurgency — which had claimed some 40,000 lives — had seemed intractable. Ankara's attempts to put it down had only inflamed Kurdish nationalism and made the PKK stronger. But with Ocalan now apparently ready to try to resolve differences peacefully, the prospects that the uprising will come to an end have improved.

Ocalan's announcement came at an opportune time. Several factors had already made the moment ripe for peace. First, the ruling Justice and Development Party (AKP) and the broader Turkish public had come to recognize that trying to end the insurgency with force was a dead end and that the government would have to make a more determined effort to find a political solution to the Kurdish conflict.

Second, the Kurdish issue is closely linked to Prime Minister Recep Tayyip Erdogan's political ambitions. Under AKP bylaws, Erdogan cannot run for another term as prime minister when his second term ends next year. Instead, he is widely expected to try to run for president. If he wins, he will be the first popularly elected president in Turkish history, capping his political career and giving him the chance to shape Turkish politics until 2023, the hundredth anniversary of the founding of the Turkish Republic.

The one problem is that, currently, the presidency is largely a ceremonial post. Erdogan has thus signaled his intention to amend the Turkish constitution to give the president stronger executive powers and to diminish the authority of the prime minister. The AKP lacks the votes in parliament to make such changes to the constitution; to do so, it needs the support of the pro-Kurdish Peace and Democracy Party (BDP), which has 33 seats in parliament. A peace accord with the PKK and promises to revise the constitution to expand Kurdish cultural rights and to broaden the definition of Turkish citizenship would help Erdogan's government secure the BDP's allegiance. In effect, to build the presidency he wants, Erdogan will need to strike a grand bargain with the Kurds. However, this prospect worries many Turks, who believe that a new constitution along these lines would concentrate too much power in the hands of one man and open the way to greater authoritarianism.

The final factor that has improved the prospects for peace is a rethinking in AKP circles of Ocalan's role in any attempt to bring the PKK insurgency to a close. In November 2012, Ocalan helped end a 67-day hunger strike of more than 600 Kurds. His personal intervention demonstrated his influence and the necessity of involving him directly in any peace plan. It was thus not surprising when, a month after Ocalan's mediation, Erdogan announced the opening of exploratory talks with Ocalan aimed at ending the PKK insurgency. On the Turkish side, Hakan Fidan, head of Turkey's National Intelligence Organization and a close confidant of Erdogan's, is leading the discussions. He and Ocalan have focused on developing a strategic road map for a peace accord.

Of course, peace is still far from a done deal. Several issues could derail an accord. For one, the question of amnesty could pose difficulties. Many Kurdish groups — and Ocalan himself — insist that PKK fighters must be granted amnesty as part of any agreement. However, much of the Turkish population considers the PKK fighters terrorists and strongly opposes letting them walk.

In addition, Ocalan might want peace and he might have great sway within the Turkish PKK, but the organization is no longer his baby. It has become a transnational movement with networks and operations across the region. Not all of them are under his control. Even if Ocalan can persuade large segments of the PKK to support a peace agreement, some hardcore nationalist groups might still be unwilling to lay down their arms. After all, many PKK commanders see no future for themselves outside of the armed struggle.

Regional developments have also complicated the peace talks. In Syria, the withdrawal of Syrian government forces from five Kurdish-dominated towns along the Syrian-Turkish border in July 2012 created a political vacuum that the Democratic Union Party (PYD) — which has close ties to the PKK — rushed to fill. The speed and ease with which the PYD was able to establish control raised Turkish suspicions that Assad might have orchestrated the withdrawal to strengthen the PKK at the expense of Turkey and the Sunni-dominated Syrian opposition. Now Turkish officials worry that the PYD-held areas could become a base for PKK attacks against Turkish territory and security forces. Turkey has threatened to intervene militarily if such attacks take place, raising the chance that any scuffle could quickly expand.

In Iran, as in Turkey, the government has faced a Kurdish insurgency. The movement there is led by the Free Life Party of Kurdistan (PJAK), an offshoot of the PKK. On occasion, Turkey and Iran used to coordinate efforts and share intelligence to combat PKK and PJAK attacks. However, the two countries' relationship has grown strained over Syria, leading to a sharp reduction in cooperation. That, in turn, has weakened Turkey's ability to deter PKK attacks. Moreover, according to Turkish officials, Iran has started clandestinely supporting the PKK. Iran has little interest in the PKK insurgency coming to an end, since that would eliminate one of Tehran's main levers for putting pressure on Turkey....

This commentary originally appeared on Foreign Affairs on March 27, 2013. Commentary gives RAND researchers a platform to convey insights based on their professional expertise and often on their peer-reviewed research and analysis.