Labor and Opposition in Iran 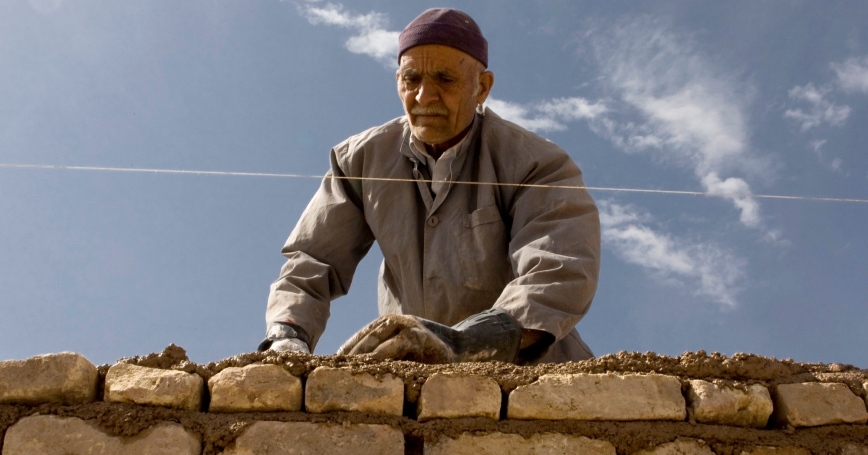 An Iranian worker builds a wall in Aradan, east of Tehran, March 2008

by Alireza Nader and Leila Mahnad

As Iran's economy continues to deteriorate, the labor movement is a key player to watch because of its ability to pressure the Islamic Republic through protests and strikes. Iranian labor, encompassing unskilled workers from rural areas and lower-class urban laborers is not a homogenous group. And thus far, Iranian laborers have not joined the opposition Green Movement en masse. But the economic pains caused by the Iranian regime's mismanagement, corruption, and international sanctions have dealt serious blows to worker wages, benefits, and job security — enough reason for Iranian laborers to organize and oppose the regime. Parallels can be drawn between the Islamic Republic's treatment of the labor movement today and the Shah's treatment of Iranian workers before his overthrow, particularly in the regime's denial of the right to organize, the quashing of protests and strikes, and its refusal to address worker's rights.

Labor participation in the 1979 revolution was the result of long-standing frustration and resentment toward the Shah's industrialization efforts. The Shah's 1963 White Revolution, which brought major land and industrialization reforms, and Iran's rising oil prices from 1965 to 1975, compelled millions of Iranians to move from rural villages to major cities. The White Revolution's reallocation of rural property from wealthy landowners to farmers led to a steep decline in agricultural productivity. Farms were not as efficient in the hands of farmers as they were under the business-savvy elite. As a result, farming jobs dwindled in the late 1960s, forcing farmers to look to the cities for opportunity. Many of these rural migrants took jobs in construction, factories, and the energy sector.

The Shah's modernization of industry also led to widespread labor dissatisfaction. His promotion of foreign investment (mostly U.S.) and private enterprise in Iran, in conjunction with rapidly rising oil wealth, continued to attract labor from rural areas, where jobs were dwindling. But Iran's booming economy was accompanied by inflation. While the early years of the Shah's industrialization led to job growth, these jobs quickly disappeared as a result of deflationary policies meant to slow spending and growth. With no government programs to bring it out of poverty, the young, poor, and unskilled labor class seethed under harsh conditions. Iran's declining economy, coupled with the rise of Iranian nationalism, created a tinderbox for social upheaval.

On January 9, 1978, government security forces shot and killed protesting theology students in Qom, sparking widespread demonstrations that culminated in the shutdown of Tehran's Grand Bazaar on January 19, 1978. Millions of ordinary Iranians subsequently took part in massive protests, with textile, sanitation, car assembly line, and paper mill workers joining the demonstrators in the summer of 1978. Major strikes included a walkout by 37,000 workers at Iran's national oil refineries and at Iran Air, paralyzing the country's energy and air transportation sectors. The labor movement's participation in the protests was a major turning point in the revolution: Those rising up against the monarchy now included a critical component of the Iranian economy.

The Islamic Republic, which replaced the Shah, has not been much better at addressing labor rights. If anything, the current Iranian regime has made working conditions in Iran even worse than in the Shah's time. Laborers still do not have the right to form independent unions, and incremental achievements in the right to organize and retain benefits have been met with violent government crackdowns.

Since the revolution, the Islamic Republic has kept close tabs on the labor class through government-monitored, ideologically centered unions known as Islamic Labor Councils and Assemblies of Workers' Representatives (for businesses with fewer than 35 employees). The labor councils are, in turn, supervised by the Worker's House, a once-secular labor organization taken over by pro-regime groups after the revolution. All councils must receive official recognition from the Worker's House or face closure. The Labor Councils and Assemblies of Workers' Representatives are loyal to Supreme Leader Ayatollah Ali Khamenei and Iran's ruling conservatives.

But Iran's state-sanctioned labor groups have faced a rising tide of dissent from Iranian laborers in recent years. President Mahmoud Ahmadinejad's economic policies, abetted by the harshest sanctions in Iranian history, have been largely responsible for labor unrest.

Ahmadinejad's policies, including cutting subsidies and privatizing of publicly owned industry, have greatly hurt the average Iranian laborer. The privatization of Iranian industry has been particularly problematic. Ideally, the practice of privatization allows for the government to offload failing businesses acting as a drag on the economy to the highest bidder. Instead, Ahmadinejad has sold government industries to companies associated with the Revolutionary Guards and ostensibly charitable — yet largely unaccountable — foundations (bonyads).

The Ahmadinejad administration's favoritism has translated into greater government influence in industry. As a result, natural market competition between companies that should occur under privatization does not exist. This makes many Iranian companies uncompetitive and unprofitable. The ultimate effect has been salary cuts and mass layoffs of low-skilled laborers. Making things worse is Ahmadinejad's failure to expand social safety nets. Sanctions, in turn, have led to much higher inflation, squeezing labor wages.

The economic decline has resulted in small but widespread strikes and sit-ins. Underground labor groups, ranging from bus drivers to sugar cane workers, have also become more outspoken, staging protests reminiscent of the revolution. One of the most significant was the January 22 sit-in by provincial factory workers in front of the Iranian parliament. Iranian oil workers have also organized protests, such as the February 2011 staged sit-in at Abadan, Iran's largest oil refinery. Both protests were sparked by unpaid wages.

Labor groups participated in various marches organized by the Green Movement after the disputed 2009 presidential election. But the labor movement has not fully embraced Iran's political opposition.

A reason may be the lack of a coherent opposition movement with clearly identifiable and achievable goals. The imprisonment of Mir Hussein Moussavi and Mehdi Karroubi has left the opposition largely rudderless and thus unable to attract important sects of society, such as the labor movement. The reformist parties, led by such figures as former President Mohammad Khatami, have avoided a serious challenge to the regime and are devoid of power and influence in the political system.

Although Iranian labor may sympathize with certain opposition goals, such as “free elections,” it is nevertheless discouraged by the Green Movement's failure to address issues important to Iranian workers, such as fair wages, health care, and workplace safety. Finally, the tension between well-educated reformist elites and the working class — often portrayed as less educated than reformist intellectuals — has bred some resentment between the two groups.

Nevertheless, Iran's declining economy could lead to greater labor unrest and the merger of the labor movement with the political opposition. Mansour Osanloo, the leader of Tehran's bus workers' union and one of the most respected labor leaders in Iran, recently stated that “the conditions for regime change exist today in Iran.” It is not clear whether there will be a replay of the revolution that overthrew the Shah or whether the labor movement will play a definitive role. However, the Islamic Republic's suppression of labor rights and its poor handling of the economy can only lead to greater instability for the increasingly beleaguered regime.

Alireza Nader is a senior policy analyst and Leila Mahnad is a project associate at the nonprofit, nonpartisan RAND Corporation.

This commentary originally appeared in Foreign Policy on April 22, 2013. Commentary gives RAND researchers a platform to convey insights based on their professional expertise and often on their peer-reviewed research and analysis.