The Conspiracy to Keep You Fat 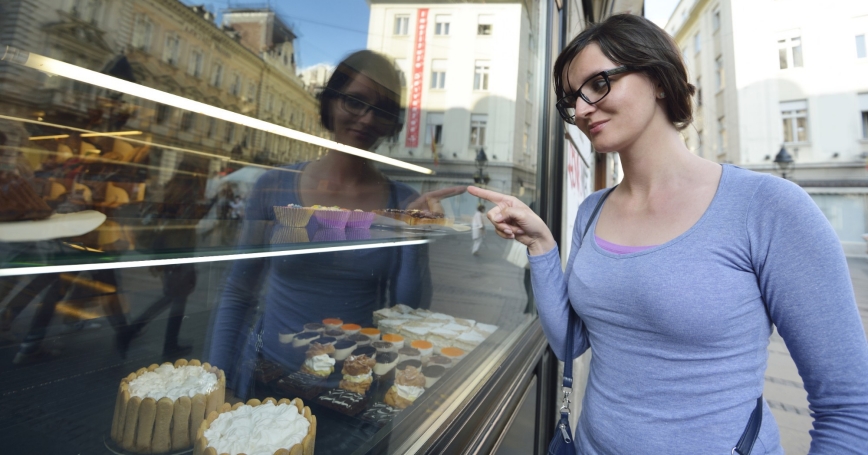 Food cues and triggers are designed to make us eat when we're not hungry — and this at a time when harms associated with overeating are as great as the harms from alcohol.

At this time of year, a lot of Americans have vowed to develop more healthful habits. Unfortunately, most of those who have made weight loss resolutions will fail. But it won't be entirely their fault.

Americans today live in a food swamp. We are constantly exposed to marketing and advertising designed to keep food on our minds and treats at our fingertips. If you go out to dinner, you will probably be served more food than you need and eat more than you should. At the market, you'll be encouraged to buy unhealthful foods. It's not easy to avoid or ignore all the forces that trigger bad eating habits.

Humans are hard-wired to notice food over other items. Once we perceive food, through sight, smell, hearing, taste or touch, we find ourselves wanting to eat, even if we are already full. This was no doubt a useful adaptation as humans evolved. But today, in a time of plentiful food, such impulses aren't in a person's best interest.

If you find yourself reaching in the refrigerator or grabbing a candy bar at the cash register when you're trying to diet, you will probably blame yourself. But the fault won't be entirely yours. Food manufacturers and marketers are playing with your most basic impulses, trying to trigger behaviors you have a limited capacity to restrain.

The ability to interrupt reflexive responses to food cues depends on many things. First among them is awareness. If you are unaware that your feeling of hunger was deliberately triggered by an advertisement or an expertly placed candy bar at the checkout stand, it will be hard to resist temptation. Similarly, if you're distracted, overwhelmed or fatigued, you're more likely to succumb.

Between 1980 and 2000, obesity rates doubled in the United States. That increase came during a period when the food environment changed dramatically. Manufacturers began to embrace impulse-marketing strategies, buying prominent shelf space for tempting, high-calorie foods and beverages at the end of aisles in supermarkets and at cash registers. Even businesses that did not sell food primarily, such as hardware stores and gas stations, began pushing snacks at the checkout counter. The amount of food advertising and the number of convenience stores and vending machines selling junk food mushroomed. Restaurants increased their portion sizes. In short, temptation multiplied dramatically, and a lot of us simply weren't up to the task of resisting it.

A similar situation existed in America 200 years ago with alcohol. It was everywhere, served on the job, in shops, in taverns. It was offered by politicians in political campaigns, and it was pushed with equal fervor to children and adults alike. Although many recognized the harms of alcohol, just telling people not to drink didn't change much — the power of readily available alcohol was too hard to resist, and the consequence was a nation of drunkards.

In the 1830s, America began to experiment with policies and regulations to change the nation's relation to alcohol, banning sales to children, for example, and restricting drinking on the job. The policies served to decrease alcohol consumption sharply. Government intervention culminated in 1920 with the nationwide ban on production and sales of alcohol known as Prohibition.

Once we realized that Prohibition went too far, as a nation, we settled on more reasonable and acceptable policies that helped many people moderate their intake of alcohol. Standardized portion sizes were adopted, allowing people to gauge their risk of becoming inebriated. Restrictions on where and under what conditions alcohol can be served were instituted.

Alcohol policies differ from state to state, but researchers have found that more restrictions on sales are associated with lower rates of alcohol-related morbidity and mortality. Most Americans have embraced laws that include limiting the number of alcohol outlets, prohibiting sales to youths under 21 and restricting the hours during which alcohol can be sold. Why? Because most people feel it's appropriate for the government to play a role in trying to mitigate the harm associated with drinking too much.

Today, the harms associated with overeating in America are at least as great as the harms from drinking. Just as we needed policies to protect people from having alcohol thrust in their faces everywhere they went, we need to develop and implement policies that protect people from food cues and triggers designed to make them eat when they're not hungry and over-consume. It's time to drain the food swamp.

Deborah Cohen is a physician and researcher at the Rand Corp. Her new book is "A Big Fat Crisis: The Hidden Forces Behind the Obesity Epidemic and How We Can End It."

This commentary originally appeared in Los Angeles Times on January 6, 2014. Commentary gives RAND researchers a platform to convey insights based on their professional expertise and often on their peer-reviewed research and analysis.