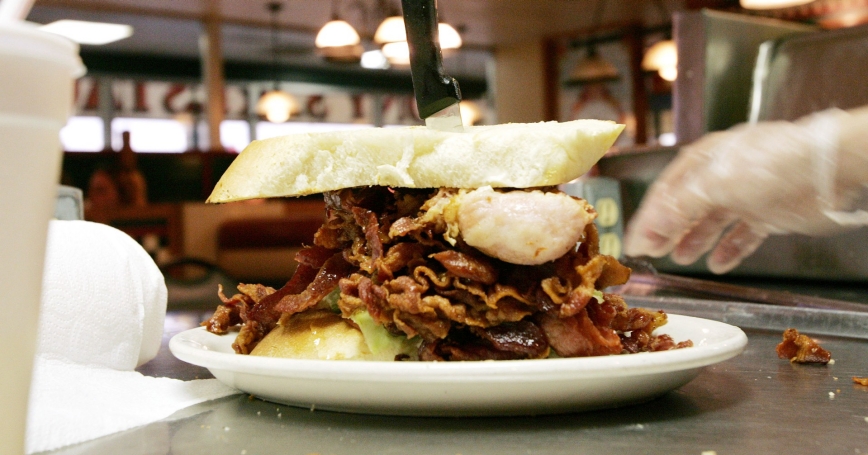 One size rarely fits all. You wouldn't buy clothes from a store offering only the largest sizes, blindly accepting the word of the proprietor that a super-sized pair of slacks is what you want and need. Yet that's what many Americans do every day when they walk into restaurants and consume meals large enough to satisfy the appetites and nutritional needs of multiple people.

Wearing clothes twice your size may make you look silly, but it hardly poses a health threat. Regularly eating oversized restaurant portions, on the other hand, does. Recent analyses indicate that more than 96 percent of restaurants are serving meals that do not meet U.S. Department of Agriculture guidelines, making dining out a risk factor for obesity and chronic diseases.

Ideally, restaurant food should be tailored and sold the way clothing is, so people can get the exact amount that is appropriate for their bodies. Such sizing options should be required in all dining establishments to give people the option of consuming meals that fit. A meal ordered in one restaurant should be calorically similar to that served in another restaurant, just like a size 9 dress in one store will have a similar fit as the size 9 down the street.

A burger at one restaurant might have 2.5 ounces of meat, while the same meal might weigh in at 8 ounces at another. Pasta is rarely served in the recommended one-cup portion, and a four-ounce portion of ice cream for dessert is unheard of.

It long has been known that serving sizes have gotten way out of control and that gargantuan portions substantially contribute to the obesity epidemic. Yet because so many people — at least two of three adults and one of three children — are overweight or obese, portion size hardly could be more important.

Restaurants seem unable to resist the urge to overserve. They usually serve too much fat, sugar and too many calories, while giving scant attention to the fruits, vegetables and whole grains necessary for optimal health. The creation of conditions that are safe and predictable is the cornerstone of public health and well-being, and standards are the best way to get there. There are standards for building construction, cars, roads and to protect workers from exposure to toxins, dangers and exploitation. And standards for serving sizes of alcoholic beverages to allow individuals to gauge their risk of inebriation.

Why not standards to stabilize the amount of food being served away from home, so people will know, for example, that a burger here is the same as a burger there?

Standardized portion sizes would not limit people's ability to order and eat as much as they want, just as people are free to buy clothes of any size. All it would require is that food be served in units that are consistent with what the average person typically needs at one meal.

Right now, many people who are trying to diet are afraid to dine out. Just as regulations that limited smoking in restaurants and bars proved to be good for business and consumers, it is likely that standardized portions sizes will bring more people out to eat while at the same time reducing their exposure to too much food. Standardized portions very well could yield benefits for businesses and consumers.

Deborah A. Cohen, M.D., is a senior natural scientist at the RAND Corp. and the author of "A Big Fat Crisis: The Hidden Influences Behind the Obesity Epidemic — and How We Can End It."

This commentary originally appeared on mercurynews.com on March 19, 2014.