A Thaw in Asia 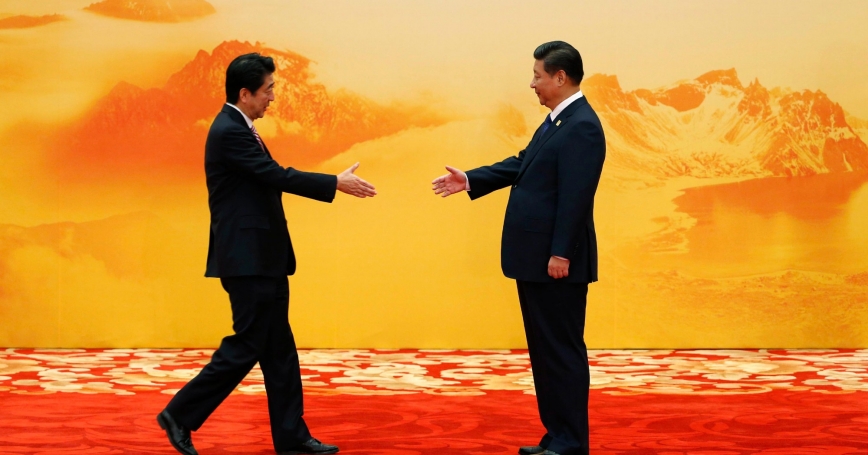 Chinese President Xi Jinping's meeting with Japanese Prime Minister Shinzo Abe this week raised hope for the near term that the leaders of both countries can ease tensions between Asia's two largest economies. This marked a welcome turn from the past few years, which saw a serious downturn in China-Japan relations marked by rising tension over competing claims to the Senkaku Islands, which Japan administers but China insists are part of its territory and refers to as the Diaoyu Islands.

However, structural drivers underpinning the strained relationship mean the leaders of both countries will continue to face long-term challenges in ensuring stable ties and avoiding a deepening and potentially dangerous strategic rivalry. Such an outcome would carry serious consequences for the United States, due to its security commitments to Japan.

At the recent Asia-Pacific Economic Cooperation summit, Xi and Abe met briefly for the first time in two years. An awkward handshake captured the attention of the international community, an apt symbol of the mix of simmering tension and reluctant cooperation that defines Sino-Japanese relations. The meeting between the two leaders proved extremely brief, lasting half an hour and yielding little substantive progress. China continues to insist that control of the Senkaku/Diaoyu Islands remains in dispute, a position Japan vigorously denies. Carefully crafted compromise language that recognized the existence of different positions on the cause of the tensions over the islands amounted not to a resolution of the problem, but to what appears to be, at best, an “agree to disagree” position by both sides.

Although on the surface the meeting may have seemed to deliver little, the encounter represented an important compromise that offers hope for greater near-term stability. The escalating rivalry and animosity between the two countries had reached dangerous levels in recent years. Something needed to be done to change the alarming trajectory. The high-profile move by China and Japan should help reassure the region that the two countries remain committed to peace and stability despite their seemingly intractable differences. The development should be viewed as encouraging for the United States, which takes no position on the question of sovereignty over the islands, but has affirmed that they fall within the scope of the U.S.-Japan defense treaty because they are under Japan's administrative control.

At a deeper level, however, the episode revealed why U.S. policymakers will need to remain focused on the long-term trajectory of the relationship. The meeting showed how much Japan needs stable ties with China, its largest trade partner. While China's economy continues to grow at a healthy clip, the reforms pursued by the Abe administration have proven disappointing. China has driven a hard political bargain in exchange for the thaw in relations sought by Tokyo, and Japan has resisted making concessions just as firmly. Nevertheless, the compromise language suggests movement towards an acknowledgment that ownership of the Senkaku Islands is in dispute, which China insists upon but Japan has sought to avoid. In so doing, Japan seems to have taken an incremental, but potentially important step towards recognizing China's growing status and influence.

Although the Xi-Abe compromise is a welcome development, the difficulty with which it was reached also underscores why Sino-Japanese relations will continue to be hard to manage. An anticipated continued growth in Chinese power and erosion in Japan's relative strength lie at the heart of the bilateral tensions. Because of these trends, territorial and other disputes unavoidably imply changes in the relative status and regional influence of each power, raising sensitivities of perceived humiliations and making any real compromise difficult. Under the best of conditions, managing the political implications of such trends would prove challenging. The depth and intensity of historic animosities between China and Japan render this task several magnitudes harder. China, Japan, the United States and the broader Asia-Pacific community will need to remain diplomatically engaged to ensure the peaceful, stable Sino-Japanese relationship needed for Asia's prosperity and security.

This commentary originally appeared on U.S. News & World Report on November 14, 2014. Commentary gives RAND researchers a platform to convey insights based on their professional expertise and often on their peer-reviewed research and analysis.