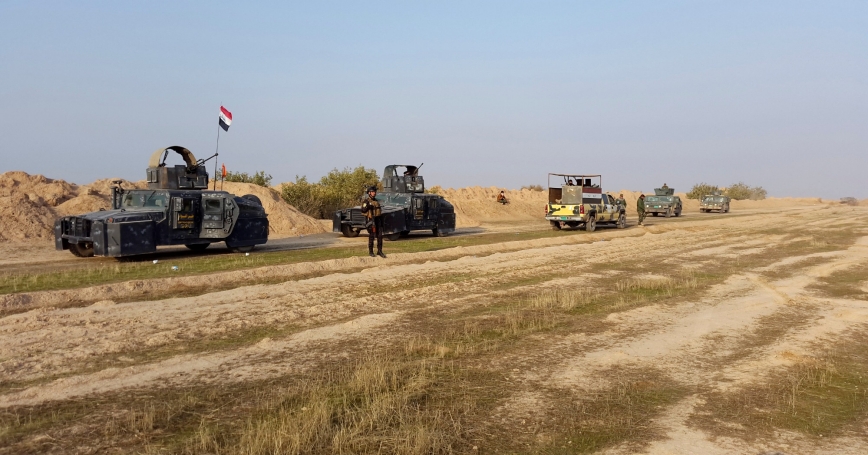 Iraqi security forces guard during the building of a new road between Diyala province and Samarra December 21, 2014. The Badr Organization, a leading political party and militia with ties to Iran, is supervising the new road.

What is Iran doing in Iraq? How important is Iran in the ground war against ISIS?

The Iranian government, particularly the Revolutionary Guards, is playing a huge role in helping the Iraqi security forces fight the Islamic State, especially in Diyala. The Guards are working with the Iraqi central government but they are reportedly heavily reliant on Shiite militias with close ties to Iran. Iran is now arguably the most influential foreign actor in Iraq.

Which Iraqi militias is Iran supporting — and how?

Iran is supporting many different militias. Some of the biggest and most prominent are the Badr Organization, Asai'b Ahl al Haq (AAH), Kataib Hezbollah, and various Sadrist elements. They are all Shiite. Certain militias such as the Badr Organization and AAH appear to be taking direct orders from Tehran. The Sadrists have had tensions with Iran before, so they may not be the most reliant of the militias.

Where are Iranian forces concentrated? How many are there? What are they doing exactly?

Iranian forces have tried to keep a low profile in Iraq, so estimating the number of active Iranians is difficult. But since late 2014, the “martyrdom” of Iranian soldiers and officers has become more common, as has Iran's publicity about its role. Senior Iranian generals — including General Qassem Soleimani, the Qods Force commander — are not only advising Iraqi forces and militias, but also visiting the front lines and allowing photographs near warzones.

What are the stakes for Iran in Iraq?

Iran does not want the Islamic State or Sunni jihadi and nationalist groups to take over Iraq. Tehran is particularly concerned that the Shiite-led government in Baghdad could be replaced by a regime hostile to Iran, as was the case during Saddam Hussein's rule. Iraq's invasion of Iran in 1980 and the subsequent eight-year war, which produced more than 1 million casualties, has always been a major factor in Tehran's strategic thinking. Many politicians and military commanders now in power were part of the war generation.

Iran is also concerned about the safety of Shiite holy sites in Sammara, Najaf, and Karbala. The rise of the Islamic State presents Iran with the opportunity to demonstrate to the Iraqis, the Arab world, and the United States that it is an important power in the Middle East and should be recognized and treated as such. From Tehran's perspective, its intervention could even provide more leverage on other issues, including the nuclear negotiations. “The world has understood the reality that the first country to rush to the help of the Iraqi people in the battle against extremism and terror was the Islamic Republic of Iran,” Foreign Minister Mohammad Javad Zarif said in December.

Had it not been for #Iran's timely assistance, many of the #Iraqi cities would have fallen to the hands of these vicious #terrorists.

How does Iran's role in Iraq today differ from its earlier activities during the U.S. intervention?

After the 2003 U.S. invasion, Iran played a prominent but largely behind-the-scenes role in Iraq. Tehran armed, trained and funded a variety of militias, mostly Shiite but some Sunnis as well. Iranian-backed militias attacked both U.S. and Iraqi government forces. Iran also reportedly funded and advised candidates and brokered alliances, although with mixed success.

The dynamics shifted when the U.S. withdrew in 2011. After the Islamic State's sudden seizure of a large chunk of Iraq in 2014, Iran and the United States actually shared the goal of driving the Sunni extremists out of Iraq. Tehran's goals were to defeat ISIS, ensure Iraq's territorial integrity, and maintain Shiite allies in the central government. By early 2015, Iran's role was much more public than in the past. Tehran actively sought to make sure the world knew it was playing a major role.

How do Iran's actions and goals in Iraq differ from the United States?

Both the United States and Iran also share an interest in preserving the Iraqi state. But their goals are not totally aligned. In neighboring Syria, the Islamic State poses a serious threat to the Assad regime, which Iran supports and the United States opposes. Tehran has also pursued a sectarian agenda in its support of Shiite militias, which contributed to greater Sunni dissatisfaction and complicated the fight against ISIS.

In contrast, Washington has pushed for an inclusive, multi-ethnic and multi-sectarian government in Baghdad to address Sunnis grievances.

How are U.S. and Iranian actions affecting each other's strategies?

Secretary of State John Kerry has acknowledged that the net effect of Iranian strikes on ISIS “is positive.” But U.S. and Iranian officials have denied rumors that they are coordinating their activities directly, preferring to deal only with Iraqi security forces.

This commentary originally appeared on The Iran Primer, USIP on January 26, 2015. Commentary gives RAND researchers a platform to convey insights based on their professional expertise and often on their peer-reviewed research and analysis.