How the Public Perceives Ebola Risk in the United States 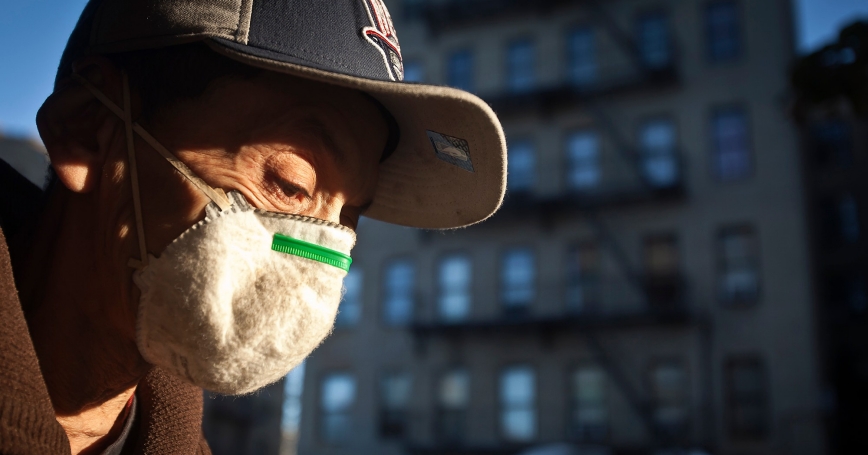 A mask-wearing man walks past an apartment building where a child was taken to the hospital to be tested for Ebola, New York City, October 27, 2014

The likelihood of an American in the United States contracting the disease was actually nearly zero at that time. This highlights how the public's perception of risk can deviate from objective measures of risk.

The data on perceived risk of contracting Ebola come from a unique resource, the RAND American Life Panel (ALP), which was used to gather reactions from a sample of adults from across the United States. Data were gathered between Oct. 26 and Nov. 1, shortly after a medical aid worker, recently returned from Guinea, was diagnosed with Ebola in New York City. The table below summarizes the responses to the question, “What do you think are the chances that you will get Ebola in the next six months?” Respondents were asked to provide their perceived probability, from 0 to 100 percent, by either clicking on a visual scale or typing in a number. Those giving very low responses (0 or 1 percent) were asked for more detail, with options ranging between 0 and 1 percent. We have combined those responses here. Numbers in parentheses are the margin of error, calculated as 1.96 times the standard error.

The good news is that a majority of respondents, approximately 61 percent, gave relatively accurate estimates of their risk of contracting Ebola, either that the likelihood was 0 percent (the response of just under 45 percent of people) or the smallest non-zero response (literally, “more than 0 and less than or equal to .001 percent (1/100,000)”), which was the response of approximately 16 percent of people.

The bad news is that approximately 35 percent of respondents felt their chances were greater than 2 percent, and nearly half of those said their chances of contracting Ebola were greater than 10 percent. In contrast, at the time of the survey, only six cases had been treated within the entire United States. Four cases of Ebola were diagnosed in people who visited Western Africa and then came to the United States, and two Americans contracted the disease caring for one of those patients. One of the people infected abroad died in the United States.

So why do so many Americans overestimate the risk? One answer comes from the psychological science of risk perception. A disease such as Ebola, where the probability of catching a disease is low, but a likely outcome is death, will tend to be more “dreaded” than if the outcome were milder (for example, a rash or fever). There was a concerted effort by federal, state, and local public-health officials to get out the word that the chance of catching Ebola was very small in the United States. However, Ebola may have been more feared by the public given information about its deadliness and gruesome descriptions of its symptoms. Hence, while most people developed realistic assessments of their chances of contracting Ebola (61 percent estimated the risk at near zero), a sizable segment of the public rated their chances as substantially above their true value.

To complicate things further, people's conceptualization of risk can be thought of as not just a number, but rather an interrelated set of beliefs (what psychologists refer to as mental models). These beliefs pertaining to a novel or unknown infectious disease may include modes of transmission, disease progression, lethality, and many other factors.

The table above also breaks down the observed population into those with substantial scientific training (scientists and doctors), other health care workers, and those in neither of these subpopulations. What we see is that more than 80 percent of those with scientific training set their chances of contracting Ebola at zero. The estimates made by other health care workers, though, were more like those of the general population, with 28 percent estimating their chances of contracting the disease at 2 percent or more, although the differences aren't always statistically significant.

The difference between the risk estimates made by individuals with more scientific training may reflect their having access to more accurate information about the prevalence of the disease outside Africa or it might be due to their using a different “mental model,” such as one that does not adjust the risk of getting the disease by the severity of the outcome.

In sum, this is why it's so important that public health communicators continue to take into account the dread associated with extreme and uncertain outcomes, recognizing that no matter how small the objective risks are, fear can make them seem larger or more important. Communication also needs to be based on an understanding of how most people think about the risk, not just how doctors and scientists would characterize it. Helping the public to realistically understand their risks associated with public health crises is crucial to achieving an effective response from the public.

The survey data came from ALP members, who agree to participate regularly in online surveys. Because the panel is already recruited, using scientific sampling methods, we are able to field surveys on breaking policy issues. In this case, we surveyed 1,413 members of the panel between Oct. 26 and Nov. 1. As with other surveys, responses were weighted to ensure that results are representative of the population (matched to the 2014 Current Population Survey) and to account for those who chose not to respond. Additional information about the methodology is available in our methodology report.

Katherine Carman is an economist, Michael Pollard is a sociologist, and Andrew Parker is a senior behavioral scientist at the nonprofit, nonpartisan RAND Corporation.