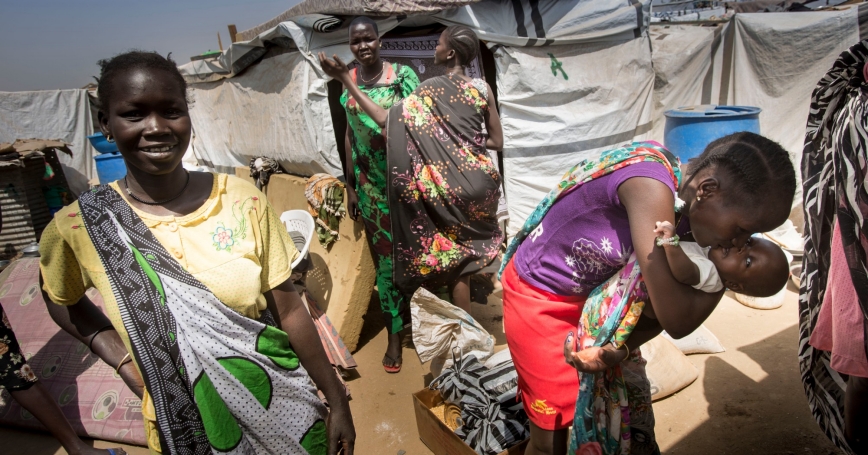 Worldwide, nearly 800 women die every day due to mostly preventable causes related to pregnancy and childbirth. More than half (PDF) of these deaths occur in fragile states torn by armed conflict and generalized violence.

The United Nations Population Fund also reports that one in five women (PDF) of reproductive age living in crisis-affected settings is likely to get pregnant.

The chaos of conflict, the sudden loss of medical support, and the fracturing of families and communities make women more vulnerable to a range of sexual and reproductive health problems that include unplanned pregnancies and unsafe abortions, according to the fund.

Even after displaced women make their way to a stable setting, they are at a much higher risk of dying from pregnancy-related complications because of a relative absence of family planning services and maternal health care.

In 2013, the sub-Saharan region accounted for 62 percent of global maternal deaths. Five countries in the region riven by different forms of internal conflict—Sudan, South Sudan, Nigeria, Somalia, and the Democratic Republic of Congo—accounted for 80 percent of the 11.4 million internally displaced persons (PDF) across 22 countries in sub-Saharan Africa, according to estimates from the Norwegian Refugee Council.

The relative absence of social protection—public policies that address the holistic needs of vulnerable populations—can expose women in conflict zones to forced marriages, sexual slavery, and systematic rape—all of which have been reported in Mali, South Sudan, and Nigeria. Women subjected to these practices are essentially defenseless against unintended pregnancies, sexually transmitted infections including HIV, and psychological injuries.

Misunderstandings about contraceptives are prevalent in South Sudan, where more than 1.5 million people are internally displaced and the maternal mortality rate is the highest in the world, at 2,054 deaths per 100,000 births. There is anecdotal evidence that women are discouraged from using contraceptives due to the desire to rebuild a South Sudanese population devastated by more than two decades of civil war. Moreover, persistent rumors that the use of modern contraceptives leads to permanent infertility reportedly dissuades women from using them.

Organizations working on the front lines, such as the United Nations Population Fund and the Women's Refugee Commission, provide emergency supplies (PDF) and training to support short-term medical interventions and reduce maternal mortality and morbidity. They also provide more comprehensive services after the crisis abates. But these approaches are not long-term solutions.

Despite the difficult conditions in countries involved in protracted conflict, a number of other organizations are also trying to provide better health care access. The SAFPAC initiative—for Supporting Access to Family Planning and Post-Abortion Care in Emergencies—is led by the humanitarian organization CARE. The initiative seeks to provide contraceptives to internally displaced people and refugees in countries like Chad, the Democratic Republic of Congo, and Mali.

A recent study suggested that the initiative is able to quickly provide high-quality family planning services in fragile settings. The interventions focus on increasing awareness of a range of family planning methods and challenge norms that restrict women's access to these services. Research has shown that once women learn about the options available to them, they are more likely to space out their pregnancies.

However, challenges remain. Women with access to family planning resources might not use them due to cultural constraints including religious teachings (PDF) and the lack of sensitivity to the subject by community leaders. Health care providers also must reach out to adolescents and unmarried women, two groups that may be reluctant to seek such services but who would greatly benefit from access to private, non-judgmental care.

Providing access to family planning for displaced populations is the most cost-effective way of reducing maternal and newborn deaths—and must be a critical part of the humanitarian response.