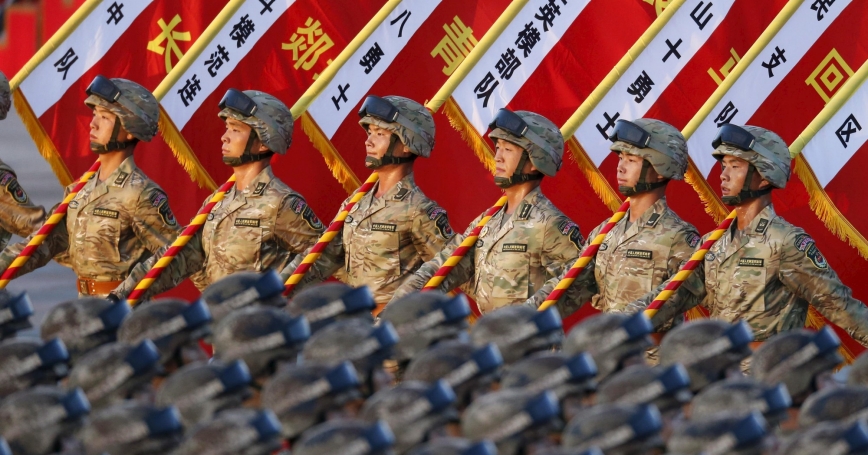 Soldiers of China's People's Liberation Army stand in formation ahead of a military parade marking the 70th anniversary of the end of World War II, Beijing, September 3, 2015

China's elaborate military parade on Thursday — the highlight of a series of events the Chinese Communist Party leadership is holding to mark the 70th anniversary of the end of World War II — allowed Beijing to showcase some of the People's Liberation Army's newest high-tech weapons. This included seven types of long-range missiles, among them some of China's newest and most advanced, which were part of a display of strategic weaponry that was designed to “surpass any previous outing,” according to sources cited by official Chinese media reports before the parade.

Indeed, this display of military hardware offered the army an ideal opportunity to highlight its growing strategic capabilities. The army and China's defense industry are working quietly but diligently to develop and deploy an increasingly impressive set of conventional and nuclear missiles, anti-satellite and network warfare capabilities designed to deter the United States and prevent the escalation of a regional crisis or conflict involving China.

For Chinese strategists, however, the military components have the most immediate, direct ability to influence a potential adversary's decisionmaking calculus. The concept of an “integrated strategic deterrent” appeared in Chinese military literature at least 15 years ago, and even though the broad contours of this idea have remained relatively consistent since that time, it has developed over the years to reflect a growing emphasis on space and cyberspace, which tracks with China's assessment that military competition in those domains is intensifying.

As the concept of “integrated strategic deterrence” has evolved to keep pace with China's emerging interests and changes in military technology, the capabilities supporting it have undergone an impressive transformation as well. Indeed, at least some parts of this concept were somewhat aspirational initially, as China lacked many of the required military capabilities to fully support it. However, China's military hardware is now rapidly catching up with the concept of “integrated strategic deterrence.” This is true across the nuclear, conventional, space, and information warfare domains.

China is deploying a more credible nuclear deterrent composed of improved silo-based ICBMs, more survivable road-mobile ICBMs and nuclear-powered ballistic missile submarines. Beijing is also strengthening its conventional forces, and the air, naval and missile capabilities most relevant to countering U.S. military intervention. These provide China with increasingly potent forces for deterrence or coercion, and constitute an increasingly central component of its overall integrated strategic deterrence posture. Beijing is also improving its space and counterspace, cyber and electronic warfare capabilities, which it sees as key components of strategic deterrence and essential to protecting its expanding interests in these domains.

These improvements in China's nuclear, conventional, space, and information warfare capabilities increasingly enable it to employ its “integrated strategic deterrence” concepts in practice. Chinese military publications are replete with references to how China can conduct deterrence operations under general peacetime conditions, such as by displaying its strength in these areas in military parades and exercises, and through other channels, such as official and unofficial media reports, commercial satellite imagery and via the Internet. People's Liberation Army publications also discuss higher-intensity deterrence actions that China could carry out to deter U.S. intervention in a crisis or to reduce the likelihood of further escalation, such as raising the readiness level of China's nuclear or conventional missile force units, conducting missile launch exercises, or even carrying out information attacks or limited firepower strikes as a warning.

These developments could have important implications for the United States in a number of areas. In particular, as China continues the development of capabilities to support “integrated strategic deterrence,” new options associated with the improved capabilities could lead to modification of existing policies and strategic concepts, such as adoption of a launch-on-warning policy, as discussed in one recent People's Liberation Army publication. Additionally, China's further development of its strategic deterrence concepts and capabilities could have implications for strategic stability and escalation management, particularly if the lines between nuclear and conventional forces become blurred. China's growing capabilities could also intensify already complex challenges related to extended deterrence and assurance of U.S. allies, who will likely become more concerned about the leverage Beijing may believe it will gain from its stronger nuclear, conventional, space, and cyber-warfare capabilities.

Consequently, as China's strategic deterrence forces continue to grow, analysts will need to watch carefully for signs that Chinese leaders are considering changes to policy or strategy that could be enabled by some of their new hardware. Additionally, even though China's growing strategic deterrence capabilities have not figured very prominently in debates about the future of the U.S.-China relationship or U.S. strategy in Asia, they are likely to require some direct U.S. responses.

First, the United States will need to invest in maintaining its own strategic deterrence capabilities, enhance the survivability and resilience of its forces in the region, and reduce its dependence on capabilities that are potentially vulnerable to disruption.

Second, the United States should continue attempting to build shared understanding with China by pursuing a broader U.S.-China dialogue on strategic deterrence and stability issues.

Finally, as China further strengthens and diversifies its nuclear, conventional, space and cyber-warfare forces, Washington will need to adopt an increasingly multi-domain approach to extended deterrence, one that fully encompasses the nuclear, conventional, space and cyberspace domains, and a correspondingly multi-dimensional approach to assuring its allies that the United States will continue to maintain the capability and the resolve to support them in a crisis.

Michael S. Chase is a senior political scientist at the nonprofit, nonpartisan RAND Corporation and an adjunct professor of China studies and strategic studies at Johns Hopkins School of Advanced International Studies.

This commentary originally appeared on U.S. News & World Report on September 3, 2015. Commentary gives RAND researchers a platform to convey insights based on their professional expertise and often on their peer-reviewed research and analysis.