Xi in Command: Downsizing and Reorganizing the People's Liberation Army 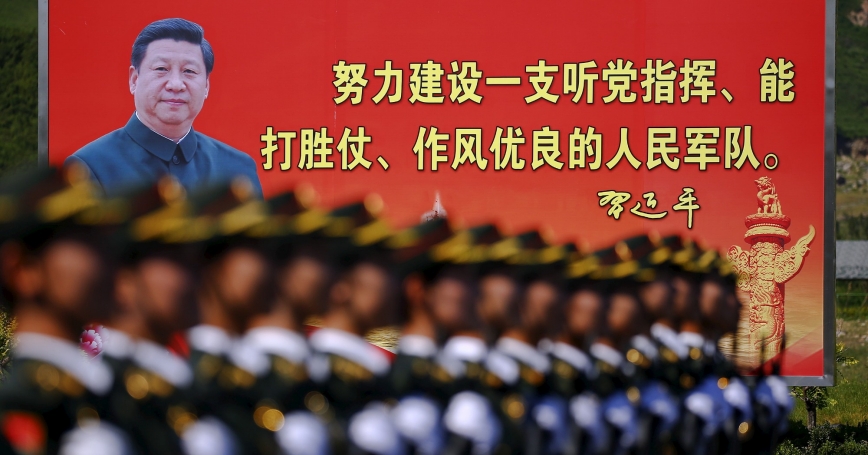 A billboard of Chinese President Xi Jinping is seen behind soldiers of the People's Liberation Army at a military base in Beijing, August 22, 2015

While many eyes were focused on China's massive military parade in Beijing earlier this month, which displayed a number of types of advanced military hardware, such as missiles, tanks, and fighter jets, another potentially much more important story about the People's Liberation Army (PLA) appeared to be unfolding, albeit largely behind the scenes.

According to recent media reports, Xi Jinping is about to accomplish a major reorganization of the PLA designed to give it a more modern, streamlined and joint command structure at the national and regional levels. In a speech at the commemoration on September 3, Xi announced that China would reduce the number of troops in the PLA by 300,000, but that is only a first step in a more ambitious reform and reorganization plan. Xi's intent to reform the PLA was made clear in a document the Chinese Communist Party released following the November 2013 Third Plenum of the 18th Central Committee.[1] The goal is a command structure that is better aligned with the PLA's missions and would improve its ability to successfully execute joint military operations (those involving two or more of the PLA's services). In short, the changes would be aimed at improving the PLA's ability to deter or coerce potential adversaries, and if necessary to fight and prevail in future wars. For many years, PLA strategists have seen a mismatch between the PLA's traditional organizational structure and the requirements of commanding such operations in a fast-paced, information-intensive military campaign against a capable adversary. There have been rumors about sweeping changes on a number of occasions, such as in January 2014 when Japanese media reported that the PLA was on the verge of restructuring its military region (MR) organizational system to reduce the number of MRs and make them more joint, but major organizational changes of the type reportedly about to be announced have been deferred, at least until now. This is presumably due in part to the complexity of the project, but perhaps even more so to opposition from parts of the military that stand to lose influence or otherwise see their power and resources diminished as a result of the reorganization.

If Xi succeeds where previous Chinese leaders have failed to achieve the desired results, one important reason could be the way his vigorous and unprecedented anti-corruption campaign has unfolded in the PLA in recent years, which has included many high-ranking targets, most notably former Central Military Commission (CMC) vice chairmen Xu Caihou and Gu Boxiong. Indeed, while there are a number of other reasons to move aggressively against rampant corruption, which has involved serious problems such as the buying and selling of promotions within the military, sidelining potential opposition to organizational change could turn out to be one of the most important. According to one retired PLA officer quoted in a Western media report, Xi Jinping “mainly employed the anti-corruption campaign in the military to form his absolute command over the army, so that his military restructuring plan can press ahead after being initially stalled.” As a result, according to the same officer, “Now, his authority in the army is solid enough for him to flesh out his vision to transform the military and set it on a path to emulate the U.S.”

Whatever the role of the anti-corruption campaign in facilitating these organizational reforms, if successfully implemented, they could have enormous implications for the PLA in numerous areas, including its strategy, operations, and the relationships between the traditionally dominant ground force, and the air, naval, and missile forces. Indeed, the growing importance of the air, naval, and missile forces is highlighted in China's 2015 white paper on military strategy, which reflects a stronger emphasis on maritime missions, in which the PLA Air Force (PLAAF), PLA Navy (PLAN), and PLA Second Artillery Force (PLASAF, China's strategic missile force) would play increasingly important roles as their capabilities continue to improve. Chinese military media reports suggest very strongly that major reforms are coming soon. Perhaps most notably, PLA Daily recently stated that such reforms “will soon unfold” and demanded that military officers earnestly study Xi Jinping's “important expositions of deepening defense and military reform.” As Andrew Erickson of the U.S. Naval War College has observed, such reports bear close watching, because in the PRC, “this is how you grab Chinese officials' attention.”

Although the exact shape of the reforms has yet to be announced, they reportedly will involve steps such as reducing the number of MRs and restructuring them to make them more suited to modern joint warfighting. Another aspect of the reforms aimed at making the PLA more joint could involve putting the ground force on a more equal footing with the air, naval, and missile forces through the establishment of a ground force headquarters with a status equal to that of the headquarters of the PLAAF, PLAN, and PLASAF. Creating a separate PLA Army (PLAA) headquarters would be a departure from a longstanding system in which the PLAAF, PLAN, and PLASAF each has its own headquarters, but the PLA's powerful four General Departments—the General Staff, General Political, General Logistics, and General Armament Departments—effectively serve as the army's headquarters and are heavily dominated by ground force officers, thus allowing the army to maintain greater influence than the PLA's other components. Whatever the exact details of the reforms, it seems almost certain they will take a long time to fully implement. Nonetheless, even announcing the reforms and beginning to put them into place would represent a major accomplishment for Xi Jinping, and an important step forward in China's quest to realize its longstanding goal of building a stronger and more modern military.

This commentary originally appeared on Asia Maritime Transparency Initiative, CSIS on September 11, 2015. Commentary gives RAND researchers a platform to convey insights based on their professional expertise and often on their peer-reviewed research and analysis.