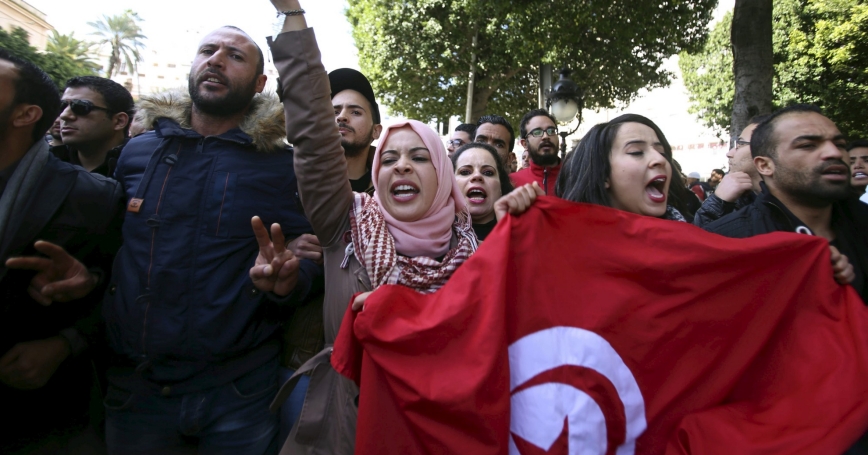 Unemployed graduates hold a demonstration to demand the government provide them with job opportunities, in Tunis, Tunisia, January 20, 2016

Tunisia's transition from the authoritarian era looks increasingly unstable. Just last month, thousands gathered from major cities to small towns to protest worsening economic conditions. Demonstrations reportedly turned violent. The swift imposition of an indefinite nationwide curfew points not only to the state of Tunisia's still fragile transition, but also to how officials of the country's two leading ruling parties respond to dissent. The United States should take stock of the situation and recognize that the shift to democratic governance is hardly certain as parties and alliances continue to splinter in myriad directions. Healthy disagreement can foster and, indeed, has fostered some real change since the 2011 uprisings and throughout the course of the transition, but the persistent power-sharing dynamics in play aren't advancing democracy for Tunisia.

The country's Constituent National Assembly is led by a coalition of parties, with Islamist party Ennahda and secular party Nidaa Tounes at the helm. The players within Nidaa Tounes originally coalesced around the primary goal of curbing what was perceived as the negative impact of Ennahda's Islamist influence. The latter peacefully ceded its majority in 2014 Constituent Assembly elections to the former. Both parties agreed to power-sharing in February 2015, acts that global observers heralded as proof of Tunisia's steady progress toward democratic governance. The pact lasted less than a year as a bloc led by Mohsen Marzouk, the former Nidaa Tounes Secretary-General, broke to form its own front. This Nidaa Tounes breakaway accuses its former party of nepotism and of returning to old guard politics. Marzouk considers his new bloc to be the “real” opposition to Islamists. Meanwhile, Nidaa Tounes and Ennahda remain locked into their governing coalition, now more committed to one another than before.

These two leading parties have more to gain politically from biding their time until more favorable circumstances arise. Until new elections are held — municipal in fall 2016 and parliamentary in 2019 — the party landscape will remain for the most part the same. For now, conciliation makes the most sense for their long-term survival in an uncertain political environment, although they may not reflect the true intentions of party members or the constituents they represent.

The paradoxical Ennahda-Nidaa Tounes phenomenon in the near-term may be more about concentrating elite power than genuine consensus to further democracy. Ideologically, they have little in common. If they combat each other, the still transitioning state could destabilize and neither party wins. While Nidaa Tounes members were engaged in political infighting, Ennahda was biding its time, expecting the former to either fold or fail. The Assembly has passed economic and security legislation this year, albeit controversial among the Tunisian public and civil society groups.

In the post-revolution phase following 2011 uprisings, Ennahda co-founder Rached Ghannouchi persuaded Ennahda members to ally with prominent non-Islamists and secularists, an apparent bid to ensure the party's continued presence as a viable player in a country with a strong secular tradition. Moreover, Ennahda's approach to Nidaa Tounes situated it to dominate throughout the transition despite its promotion of Islam. It is the only party from Tunisia's Troika government that remains a key player today. The long-term prospects of staying in power beyond its initial survival may prove challenging, however, if the interests of conservative members stay buried.

From the start of the 2011 revolution, Ennahda has struggled to form a consistent external message on the religious questions that unnerve the opposition, particularly staunch secularists. The mixed messaging is due to Ennahda's diverse membership base, which ranges from extreme conservatives to progressives.

Many among Tunisia's opposition fear a similar scenario as Ennahda makes deep, but perhaps only temporary, political compromises. For example, Ennahda eventually dissociated from violent Salafist groups, but only after bowing to domestic political pressure. Secularists, meanwhile, have sought to portray Ennahda's dominance in a language that stokes fear of Islamic governance. This anxiety resonates with western governments, a fact Ennahda seems willing to accept even as it seeks to sustain legitimacy as a moderate Islamist party on the international stage.

Constant compromise comes at a dear cost to the conservative base within the party. Ennahda is indeed larger and more unified in purpose than its opposition is. But power-sharing arrangements may prove fruitless in the long-term as it did for the factions within Nidaa Tounes. The party's grassroots constituencies are not likely to abandon their religious-centric aims, which could create more pressure within the party to either push for more conservative legislation, or perhaps force it to splinter at some point down the road.

For now, Ennahda cannot govern alone; the alliance with what remains of Nidaa Tounes still totals well over the 109 seats required of the lawmaking body to secure a confidence vote. Ennahda now has a plurality of seats — 69 in a 217-seat Assembly — but will continue to require internal legislative diplomacy to form a majority coalition capable of passing legislation.

By the same token, Nidaa Tounes cannot survive and pursue its goals without at least some cooperation from its Islamist counterparts. The recent split of Nidaa Tounes prompted no major political upheaval, but the short period of parliamentary dominance within the non-Islamist opposition bloc has ended and is unlikely to return. Conversely, the loss of Islamists in the 2014 Assembly election appears to have been only a momentary setback as they are now again the single most important player and likely to remain so for now. But, it must stay allied with Nidaa Toune to stay alive and relevant. This may be the safest bet to ensure each party's survival as political players, but the arrangement is hardly the clearest path toward improved, representative and democratic governance.

Amanda Kadlec is a project associate at the nonprofit, nonpartisan RAND Corporation.

This commentary originally appeared on Foreign Policy Concepts on February 5, 2016. Commentary gives RAND researchers a platform to convey insights based on their professional expertise and often on their peer-reviewed research and analysis.