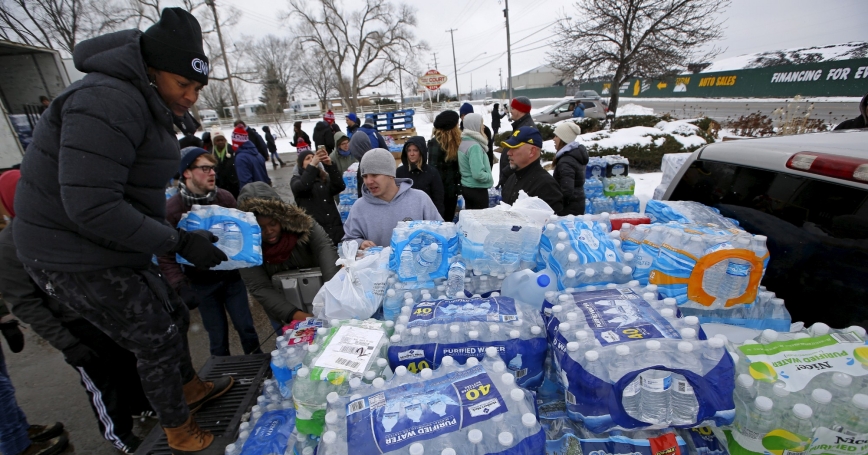 Sunday's debate between Democratic presidential candidates Hillary Clinton and Bernie Sanders held in Flint, Michigan focused new attention on the city's water contamination crisis. Millions of dollars are pouring in to fix pipes that contaminated the water in Flint with lead, and both candidates called for additional aid.

But it will take much more than replacing pipes to truly support the community and give it the power to bounce back from slow-moving disasters that were already happening long before the discovery of lead in its drinking water.

Similar to other communities affected by disasters in the United States, this public health emergency can be expected to have profound societal effects in the Flint community. Past disasters in other communities have shown the importance of resilience, which includes the ability to return to self-sufficiency and sustain relatively stable psychological and physical functioning after a traumatic event. For Flint to recover from this latest disaster, it will be critical for the public, private and nonprofit sectors to invest in and implement strategies to build on existing community resilience and strengthen Flint's ability to bounce back.

On Jan. 5, Gov. Rick Snyder declared a state of emergency in Flint, Michigan, followed by President Barack Obama declaring a federal state of emergency, authorizing assistance from the Federal Emergency Management Agency and the Department of Homeland Security. Of course, Flint starts on this journey against a backdrop of numerous baseline challenges, including high rates of poverty, lack of employment opportunities, vacant homes, homicide, violence, substance abuse and psychiatric illnesses. Disasters on the scale of the water crisis have been found to affect the physical and mental health of individuals in impacted communities. Significant population-level public health implications like overwhelmed health care institutions and limited social resources often ensue.

For example, in the aftermath of the 2011 tornado in Joplin, Missouri, the community experienced higher rates of drug and substance abuse and domestic violence. Studies reveal a high incidence (up to 64 percent) of post-traumatic stress disorder and depression in populations affected by disasters and high related health costs. Furthermore, science finds that teens who had been exposed to high lead levels in childhood were more likely to engage in substance abuse and risky behavior as well as involvement in crime as adults. Social support and early intervention have been found to be key to recovery by lowering the risk of these conditions, particularly for individuals at risk for mental health problems.

Researchers at the RAND Corporation found that in order to improve recovery from disasters, all levels of a community including individuals, organizations, businesses, government and private entities need to work together. Critical actions that can help build resilience in disaster-stricken communities include promoting population and behavioral health, ensuring access to health and social services and providing education and information regarding the incident and related health issues on an ongoing basis.

The Flint community, like others, has built strong local community organizations that best understand their local needs. These existing resources can be leveraged to further build community resilience. Against many odds such community organizations have made a significant difference in the lives of Flint residents by mentoring youth, building community capacity, transforming empty lots into gardens and centers of local activity and altering service delivery to be more in tune with local issues. Efforts to expand such resilience-building need to be informed by both existing scientifically-based resilience and empowerment programs and the voices of community residents.

It is critical to understand, not all children in Flint were exposed to lead, and those exposed will not necessarily experience adverse long-term consequences especially with early intervention. However, the effect of the lead water crisis in Flint will not be limited to the children who have been exposed to lead and their families. This latest blow to the public's trust in government in the setting of an impoverished community with high baseline rates of mental illness and substance abuse could have significant adverse health implications on the larger community for years to come. Resources are needed for Flint to address the larger issues of economic decline, high rates of poverty and disparities in health.

The presidential debate in Flint has raised awareness, but parachuting in with plans to fix the lead crisis alone is not the answer. Rather, the focus should be on the long haul. Successful strategies to promote public and behavioral health; improve educational and service delivery systems; and create the structure for significant, real community engagement and self-sufficiency should be implemented. Only then can the residents of Flint begin to trust in government and rebound from this tragedy of events.

This commentary originally appeared on U.S. News & World Report on March 9, 2016. Commentary gives RAND researchers a platform to convey insights based on their professional expertise and often on their peer-reviewed research and analysis.