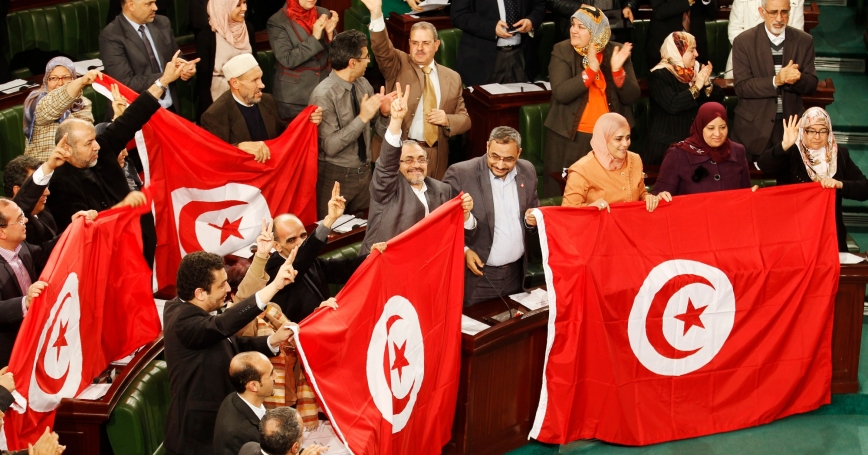 Members of the Tunisian parliament wave flags after approving the country's new constitution in Tunis, January 26, 2014

The Avenue Bourguiba in Tunis is a street of contrasts, with hedge-cut ficus trees, florists, cafes and an old Art Deco cinema intermingled with hoops of razor wire that cordon off government buildings. The first government overthrow resulting from the Arab Spring took place here in the capital of Tunisia about five years ago. Citizens from all walks of life—young and old, men and women, secularists and Islamists, members of trade unions and employers unions—all united to oust a repressive government that had not met the needs of its people.

Other Arab countries tossed out long-standing dictators but became mired in civil war (Syria, Libya and Yemen) or fell back after counterrevolution to a regime of the old dictatorship (Egypt). Tunisians, through much difficulty, forged a new path.

The people of Tunisia drafted a new constitution, meant to be a new social contract for its society....

The remainder of this commentary is available on observer.com.

Shelly Culbertson is a policy analyst at the nonprofit, nonpartisan RAND Corporation. This commentary is based on research for her book, The Fires of Spring: A Post-Arab Spring Journey Through the Tumultuous New Middle East, which was published April 19.

This commentary originally appeared on Observer on April 20, 2016. Commentary gives RAND researchers a platform to convey insights based on their professional expertise and often on their peer-reviewed research and analysis.