Partitioning Iraq: Make a Detailed Case, or Cease and Desist 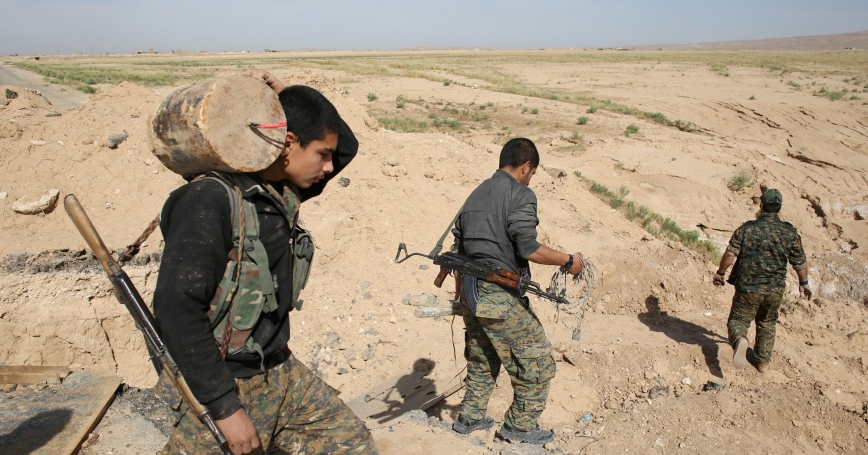 The Sinjar Resistance Units, an offshoot of a leftist Kurdish organization, and Abdulkhaleq al-Jarba, a Arab tribal militia, have opened up a new front against Islamic State militants in northern Iraq, April 30, 2016

Iraq is once again in political turmoil, and once again we are hearing calls to partition the country into three ethno-sectarian cantonments: Shi'a, Sunni, and Kurd. The partition trope resurfaces periodically, most often while Iraq looks “too hard to fix.” Advocates of partition suggest that Iraq is a false construct of the century-old Sykes-Picot treaty, and that Iraqis are incapable of sustaining a heterogeneous state. Putting aside the fact that the Sykes-Picot narrative is at best contested, it is time to put the partition trope to the test and then, hopefully, to rest. The mostly non-Iraqi voices who want to divide the country into thirds owe the Iraqi people and the rest of the world extensive, detailed clarification. Surely, any plan to drastically restructure Iraq must be more thoughtful and detailed than the widely condemned 2003 plan to invade Iraq. At the very least, advocates for partition should address some fundamental questions. If they cannot answer these satisfactorily then they should pause before reissuing what many Iraqis view as disheartening, and even inflammatory, positions about their state.

First, who wants to break the state into three parts, either under “loose federalism” or as separate states? There appears to be no evidence that the current Sunni revolt seeks sectarian partition. Other than the outlying Islamic State terrorists, Sunni Arab Iraqis want to be part of and, in some cases to control, the state. Most Sunni Arabs I have spoken with are terrified by the idea of partition. It does not appear that leaders from Iraq's powerful Da'wa party, or even Muqtada al-Sadr, seek partition. While the two major Kurdish parties—the PUK and the KDP—do seek eventual partition or confederation for themselves, and while the head of the PUK has suggested three way partition, neither party has pushed hard for this solution and neither party can claim to represent Iraqi Arab interests. Arguments for partition cannot be predicated on the idea that this is what the Iraqis want. If Iraqis do eventually seek three-way partition, then there is no need to advocate the position, as they will get there of their own accord....

Ben Connable is a senior political scientist at the nonprofit, nonpartisan RAND Corporation, a professor at the Pardee RAND Graduate School, and a retired Marine Corps intelligence and Arabic-speaking Foreign Area officer.

This commentary originally appeared on War on the Rocks on May 16, 2016. Commentary gives RAND researchers a platform to convey insights based on their professional expertise and often on their peer-reviewed research and analysis.