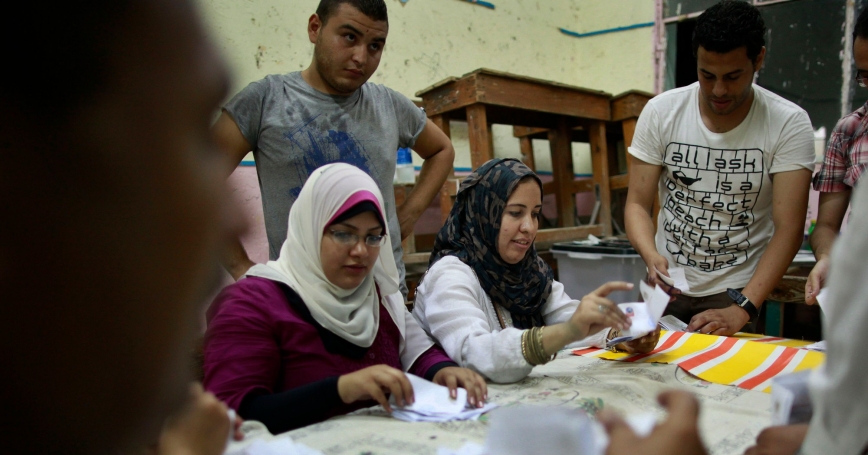 Officials count the ballots after the polls are closed in Cairo, Egypt, June 17, 2012

Some declare the Arab Spring over and its revolutions a failure, with counter-revolutions ranging from political to violent.

The news from the Middle East after the Arab Spring is often dismal. But the reality is much more complex. It is too short a time frame to fully understand it.

It will take a generation or more to fully realize its effects. Mehran Kamrava at Georgetown University comes to a similar conclusion. He argues that the “ruling bargain” in the Middle East is changing with the Arab Spring, although the outcome is not yet set. It is not clear yet what will emerge.

In many countries, in the wake of the protests, small, quiet and incremental changes are taking place (even in Egypt). At the root of these changes are both a newfound sense of agency among the people of the Middle East and a wariness of the too fast change that created chaos in some countries.

There are new or revised constitutions, with calls for new social contracts with pluralistic inclusion in society, accountability and participation. Relationships between peoples with varying religious, ethnic, or national identities are being redefined.

How Islam fits into governance of society is being both peacefully debated and violently fought over. Women are remodeling their roles, rights and responsibilities. Youth are rejecting the social order of stagnation and stability to which their parents acquiesced. Business and government leaders are recognizing the need for new educational and economic models that offer merit-based opportunities.

But in other countries, borders are being challenged, and there are mass migrations of people displaced by violent conflict, inflicting untold human suffering.

In some places, the Arab Spring has unleashed conflict and deepened religious, social, class-based, political, and ethnic cleavages in society. Some parts of the Middle East are unlikely to enjoy stability and prosperity for a decade or more, with civilians suffering damage to their bodies, minds and communities that will take generations to heal.

There is a compelling case to be made that countries across the Middle East, as a group, are not looking very democratic several years after the 2011 events. Tarek Masoud at Harvard concludes, “Arab democracy seems further away today than it has at any point in the last twenty-five years.”

Liberal democracy is not the only measure of the aftermath of the Arab Spring.

I would propose that liberal democracy is not the only measure of the aftermath of the Arab Spring—it is one of a number of goals (political, economic, social and legal) that could be summed up as creating a good society.

We conflate the term “democracy” with a package of elements that make up a good society, and electoral democracy is but one (albeit very important) piece.

There are other changes underway in Middle East countries not mired in civil wars that give cause for measured optimism in the long run: removing stagnant governments, newfound official or tacit accountability, experimentation with government models, seeking to create new social contracts through constitutions, economic stimuli, increased investment in public services, reining in the behavior of the police (or at least having public debates about their behavior), popular sentiments that freedom of speech is an irreversible right, and more.

What can we learn from other great waves of revolutions in modern history? The American Revolution, French Revolution, the “Springtime of Nations” of 1848, the Russian Revolution and the 1989 revolutions that swept Eastern Europe and the Soviet Bloc (also named after a season, the “Autumn of Nations,” or labeled various “color” and “flower” revolutions).

While they unfolded in different ways, their implications often took several decades to be understood. While we can learn from history, perhaps every revolution is unique to itself.

No one can predict the future. Few would have predicted that stable autocratic governments around the region would have been toppled in a matter of months in 2011.

Five years ago, few would have imagined that a medieval Islamist group would declare a caliphate, inflict brutal violence on a region’s population and take over parts of Iraq and Syria. After Egypt’s 2011 revolution, few would have predicted a second revolution in 2013.

What will the Middle East look like in the next few decades? We have all been surprised so far.

Out of the upheaval that was the Arab Spring, a pessimistic scenario looking forward could see continued violence and warfare, ISIS as a country and a repressive Egypt that undergoes another revolution in a decade.

But another scenario could see the Arab Spring movements over time translating ideals into institutions, building prosperous societies, with economic opportunities, quality education, pluralistic participation and equal rights before the law regardless of identity, with citizens empowered to shape their future.

This generation will likely not witness the full results of its revolutions.

But what will happen in two decades when the generation of youth who overthrew governments because of shared ideals will have more presence in leadership roles in society?

While youth protesters toppled governments or forced change, that same generation of youth will now need to determine how it will develop the gradual changes needed to support the ideals of the Arab Spring.

Shelly Culbertson is a policy analyst at the nonprofit, nonpartisan RAND Corporation. This is excerpted from her book The Fires of Spring: A Post-Arab Spring Journey Through the Turbulent New Middle East. Copyright © 2016 by the author and reprinted by permission of St. Martin's Press.

This commentary originally appeared on Newsweek on June 15, 2016. Commentary gives RAND researchers a platform to convey insights based on their professional expertise and often on their peer-reviewed research and analysis.