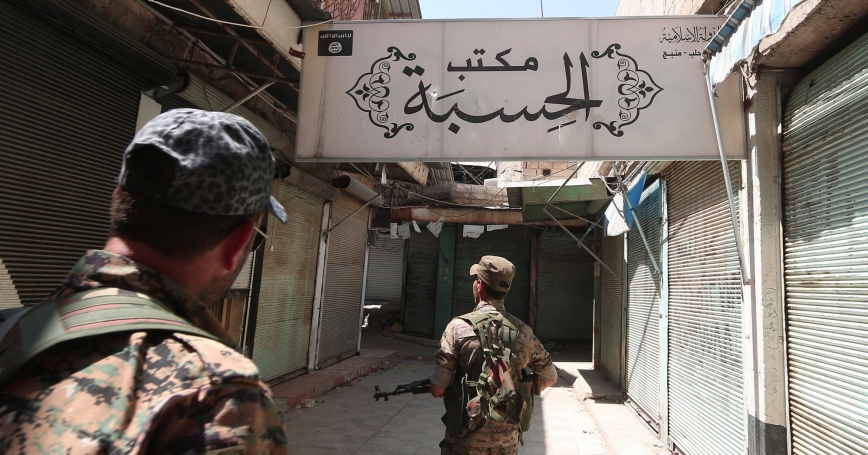 Over the past several weeks, the Islamic State group has suffered major tactical defeats on the battlefield, including the loss of a major logistics route into the caliphate, Manbij, and being driven from what was considered its strongest external foothold outside of Iraq and Syria, Sirte.

And while the coalition should embrace good news where it matters, it would be premature to take comfort in the string of recent victories.

Of the three concentric circles that comprise the Islamic State group, the war is going better than expected against the two innermost circles—the first is the caliphate itself, the core of the Islamic State's organization. In the next outermost circle, the outlying areas of Afghanistan, Libya, Somalia, Nigeria and Yemen, things are going reasonably well, as Islamic State affiliates in those countries are being slowly but steadily attenuated. Perhaps the most concerning is that last concentric circle, the amorphous and disconnected outer ring of lone wolves and small groups of jihadists inspired by Islamic State propaganda and ideology.

To counter the threat the Islamic State group poses to the Middle East and the West more broadly, it is crucial to understand what the terrorist organization is and what it is not, where it is truly dangerous and where its power and reach have limits. Attributing all jihadist violence to a ruthless gang headquartered in Raqqa, brilliantly planning attacks and managing their caliphate while pulling the strings near and far, exaggerates the power of the Islamic State group and plays into their propaganda and recruiting efforts.

The caliphate is both the Islamic State group's greatest strength ... and its greatest vulnerability.

Second, the Islamic State group is a collection of provinces, affiliates, franchise groups or wilayats, not all of which are created equal. The Islamic State has claimed relationships with satellite groups in Libya, the Sinai Peninsula and Afghanistan, and has garnered bayat, or allegiance, from organizations or splinter groups of these organizations previously independent or formerly aligned with al-Qaida, including Boko Haram in Nigeria, al-Shabab in Somalia and others throughout the Muslim world. This haphazard collective of ne'er-do-wells should not be seen as more than it is. Some groups are, indeed, dangerous and enduring, but most—like the caliphate itself—are likely not.

Third, and perhaps most importantly, the Islamic State is an ideology. What it represents is the embodiment of Salafi jihadism and all of its undercurrents—anti-American, anti-Jewish and, of course, anti-Shia. This ideology motivates individuals and groups around the world to conduct attacks in the Islamic State's name, as happened in San Bernardino, Orlando and elsewhere. This third manifestation of the Islamic State group is the most insidious, unpredictable and difficult to eliminate.

Now, for what the Islamic State is not: It is not an existential threat on the order of the challenge the United States faced during the Cold War. It is not a nuclear-armed nation-state like the Soviet Union, nor is it a near-peer adversary, trained and equipped for conventional military operations like China, Iran or North Korea.

Second, the Islamic State group is not a monolithic actor. Many in the West have lumped disparate and diverse threats under the Islamic State banner. In part, this is a legacy of the Cold War, when Washington became comfortable with defining grand strategy in terms of “us versus them.” “Them” now includes a range of state and nonstate threats, and not all terrorists are the same. Moreover, all Salafi jihadi terrorist groups are not the same.

While defining the Islamic State threat as unitary helps provide much-needed structure and logic to American counterterrorism strategy, it also causes conceptual confusion. Accordingly, knee-jerk statements that the Islamic State group was the perpetrator behind an attack, conclusions sometimes reached even before the carnage has ended, are unhelpful—more myopia masquerading as analysis and counterproductive in the short and long term. Trying to make sense of the many faces of the Islamic State group is a fool's errand—this is an opportunistic, disaggregated movement, not a centrally managed organization.

But Americans crave structure and logic to help understand the senseless brutality of the Islamic State. Americans want confidence that they've clearly identified the enemy, they understand the cause of violence and they have a fixed target to strike back against.

Next, the West hypes the Islamic State's command and control architecture, especially its capacity for central planning, and in doing so it is unnecessarily building the Islamic State group up to appear much stronger than it is. When the attackers in Dhaka separated Muslims from non-Muslims before killing the latter, analysis in the immediate aftermath of the attack was that the Islamic State group had changed its strategy akin to what al-Qaida attempted to do in its more parsimonious pursuit of slaughter. More likely, the decision was a local one, not dictated by Islamic State leadership, based more on parochial concerns about alienating domestic support for the attackers' agenda in Bangladesh.

Indeed, if the Islamic State group had altered its strategy, what would that say about the attack in Baghdad just days later, where 300 Iraqi Muslims, including Sunnis, were wantonly slaughtered by Islamic State suicide attackers?

Finally, when discussing the Islamic State group it is important to note what else the group is not—namely, it is not invincible. Despite all the hyperbole surrounding its rise as the wealthiest and most sophisticated terrorist organization of the modern era, the Islamic State group has lost considerable ground in recent months. Even without substantial numbers of ground forces engaged in the fight, the coalition has still managed to take the fight to the Islamic State on several fronts, constricting its resources (oil and financing), tightening the borders (including the previously porous border with Turkey), killing its fighters and preventing new ones from arriving in droves and recapturing key territory (Ramadi, Fallujah, Manbij) while encircling core areas like Mosul and Raqqa.

While perhaps still premature, it seems that the caliphate's days are numbered. Even the group's remaining leadership seems to be preparing its followers for this eventuality. The coalition should make plans for continuing the conflict against a changing enemy—the conventional attacks on identifiable targets in the caliphate itself are more straightforward than the struggle against an amorphous, disparate movement.

No counterterrorism strategy, no matter how comprehensive or robust, can address the grievances that led to the resuscitation of the Islamic State group.

Countering the Islamic State group demands a sober assessment of the group's organizational and operational capabilities. But even more crucial, it requires an honest recognition of the coalition's ability to affect events as they play out on the ground. No counterterrorism strategy, no matter how comprehensive or robust, can address the grievances that led to the resuscitation of the Islamic State group or pacify the virulent ideology which sustains the group.

Eliminating the physical embodiment of the Islamic State—the caliphate—is a necessary, but not sufficient, component of winning the long war against the group and in addressing the region's more fundamental challenges. And whatever iteration of violent extremism replaces the Islamic State group, the West should be careful not to afford that group with reverence it does not deserve.

Andrew Liepman is a senior policy analyst and Colin P. Clarke is a political scientist at the nonprofit, nonpartisan RAND Corporation.

This commentary originally appeared on U.S. News & World Report on August 19, 2016. Commentary gives RAND researchers a platform to convey insights based on their professional expertise and often on their peer-reviewed research and analysis.