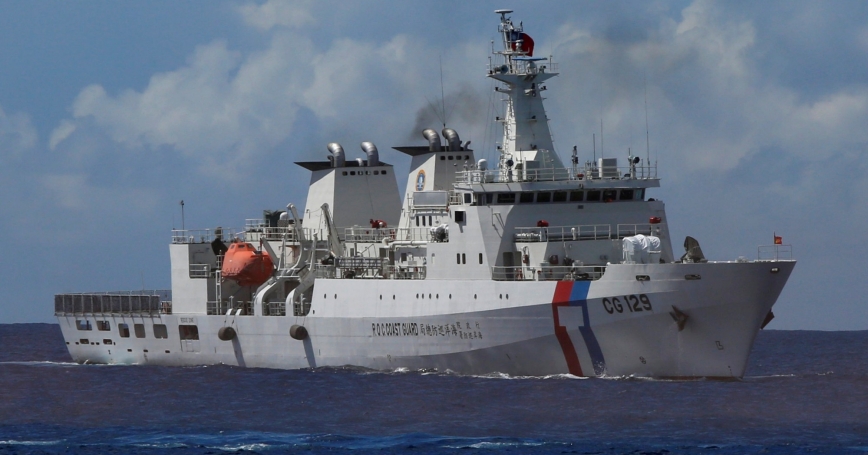 Taiwanese Coast Guard patrol ship, Kaohsiung (CG 129), during a rescue drill near the coast of Itu Aba in the South China Sea, November 29, 2016

As countries of the Asia-Pacific develop policies to regulate large maritime zones of jurisdiction, the importance of coast guards as instruments of state policy has become increasingly important as a means of enforcing national maritime laws. Although the topic of coast guards has been dominated as of late by China's massive coast guard expansion and its role in territorial disputes, the operations of smaller coast guards, such as the Taiwan Coast Guard Administration (CGA),[1] have received comparatively little attention. This article attempts to highlight the roles, force structure, and effectiveness of operations of the CGA.

The modern CGA was founded in 2000 with the integration of Taiwan's Coast Guard Command and the Maritime Police and Customs into one civilian law enforcement agency. Like the United States Coast Guard, the CGA serves homeland security functions during peacetime and national defense missions during wartime. The CGA is under the administration of the Executive Yuan.

The top three missions of the CGA are: 1) the regulation of coastal zones under national jurisdiction, 2) the inspection of cargo entering and exiting ports, and 3) the investigation and seizure of smuggling operations and illegal vessels or people entering or exiting the country. Other missions include search and rescue, intelligence gathering, and support for maritime research and development.

The CGA is organized functionally across two directorates: a Maritime Patrol Directorate General (MPDG) (海洋巡防總局), responsible for far seas operations and patrols, and a Coastal Patrol Directorate General (CPDG) (海岸巡防總局), which patrols coastal waters, rivers, ports and bays. The CGA is organized regionally into Northern, Central, Southern and Eastern sectors, which cover the island of Taiwan proper (1,130 miles of coastline), as well as the waters surrounding the islands of Kinmen, Lienchiang (composed of Nangan and Dongying townships), Penghu, Pratas, and Taiping Island in the South China Sea. The total maritime area under Taiwanese jurisdiction covers over 335,000 square miles of exclusive economic zone (EEZ) waters.

According to CGA statistics, by the end of 2015 (PDF), the CGA had 13,061 personnel dispersed among the two directorate fleets. The MPDG is the CGA's blue water fleet that must cover far sea maritime areas. Therefore, the MPDG has many of CGA's largest cutters, such as the 3,000-ton Yilan class (CG-128) and Kaohsiung class (CG-128), both outfitted with helicopter landing pads and auto-cannons. The MPDG executes its mission with only 20 percent of total CGA personnel—about 2,550 officers. The bulk of the CGA is concentrated in the CPDG, with 10,222 personnel stationed across 13 patrol areas (巡防區), and dozens of brigades (岸巡大隊) and corps (巡總隊) units.

The total size of the CGA fleet is around 140 patrol and coastal vessels and is eight years into a 37 vessel, 24 billion NTD (US$ 782 million) shipbuilding program which will reportedly add 17,000 tons of capacity. When completed, the CGA will boast a total fleet size of 36,000 tons and 173 vessels.

Illegal fishing within Taiwan-administered waters is an area of increasing emphasis for Taiwan's Coast Guard.

Illegal fishing within Taiwan-administered waters—in particular cracking down on illegal fishing activities from the People's Republic China (PRC) (as is happening in other parts of East Asia)—is an area of increasing emphasis for the CGA. These waters include Taiwan proper as well as the islands of Kinmen, Lienchiang, Penghu, and Pratas—territory claimed by the PRC but which the PRC does not actively contest. The only territory that Taiwan administers that could be considered “contested” is Taiping Island in the South China Sea, which is claimed by the PRC, the Philippines, and Vietnam. In other words, the illegal fishing that the CGA is attempting to neutralize appears to be occurring in largely uncontested maritime zones—the jurisdiction and laws over which are tacitly accepted by the PRC.

Starting in March 2012, the CGA initiated an aggressive campaign against illegal fisherman from the PRC called the “Clear Ocean Program” (碧海專案), which increased the number of investigations (查獲), expulsions and fines for fishing violations occurring within Taiwan-administered waters. The program appears to have been effective, as the number of illegal fishing inspections has gradually decreased over the past few years.

In 2015, for example, only 2,120 ships were inspected, of which 96 percent (2,035) were “expelled” (驅離) and 4 percent (85) were “detained” (扣留). This represented a decrease from an average of 5,110 inspections over the previous five years, according to CGA statistics. Most of the vessel detentions occurred near Kinmen, Lienchiang and Pratas islands, areas where 90 percent of fish stock has been depleted over the past 30 years.

Of the illegal fishing vessels inspected over the past five years, almost half (47.1 percent) were interdicted in waters off of Taiwan proper. The other half (43.5 percent) occurred off of Kinmen and the waters surrounding Lienchiang County—islands located only a few miles from mainland China. The other 10 percent occurred off Pratas and Taiping Island.

The size of vessels inspected range from 5-200 tons, with 100-200 ton vessels ranking first among all vessels seized in the past five years. 96.8 percent of these vessels came from the PRC, according to official CGA statistics.

Furthermore, between 2012 and 2015, fines against fishermen from the PRC increased substantially and peaked at 275 vessels in 2014, with fines averaging 175,100 NTD per vessel. The heavy fines and aggressive patrols seemingly had a deterrent effect, as only 78 vessels were fined in 2015.

The PRC is not the only country against which the CGA has stepped up operations. The CGA on occasion seeks to protect Taiwanese fishing and, in some cases, activists' interests near the Japanese-administered Senkaku Islands. In the course of protecting a flotilla of Taiwanese activists attempting to assert sovereignty over the Senkaku Islands in 2012, the CGA reportedly “bumped into” Japanese Coast Guard vessels that were attempting to apprehend the activists. The CGA has also gotten into numerous skirmishes with Philippine Coast Guard and fishing vessels in the past. However, among illegal foreign activities in Taiwan-administered waters, Chinese fisherman represent the primary challenge to CGA authority and will likely remain so in the near future.

Finally, one mission of the CGA that has received relatively little attention is its jurisdiction over the disputed Taiping Island within the Spratly Islands in the South China Sea. In January 2000, the CGA replaced the Taiwan Marine Corps station in Taiping Island (with stations on Pratas and Kinmen Islands following suit), marking an important shift in administrative control from military to civilian personnel. The CGA also oversees biannual live-fire and search and rescue drills with the Taiwan Navy off Taiping and Pratas Islands to enhance interoperability and defense capabilities between the two services. The shift in command to the CGA reflects an understanding on the part of Taiwanese leaders that the South China Sea should be demilitarized.

The main point: The CGA is an increasingly effective constabulary force facilitating the protection and regulation of Taiwanese maritime rights and interests in the East and South China Sea.

Lyle J. Morris is a policy analyst at the nonprofit, nonpartisan RAND Corporation, where he focuses on Asia-Pacific security issues. The author would like to thank Logan Ma and Arthur Chan for research assistance for this article.

This commentary originally appeared in Global Taiwan Brief on February 15, 2017. Commentary gives RAND researchers a platform to convey insights based on their professional expertise and often on their peer-reviewed research and analysis.