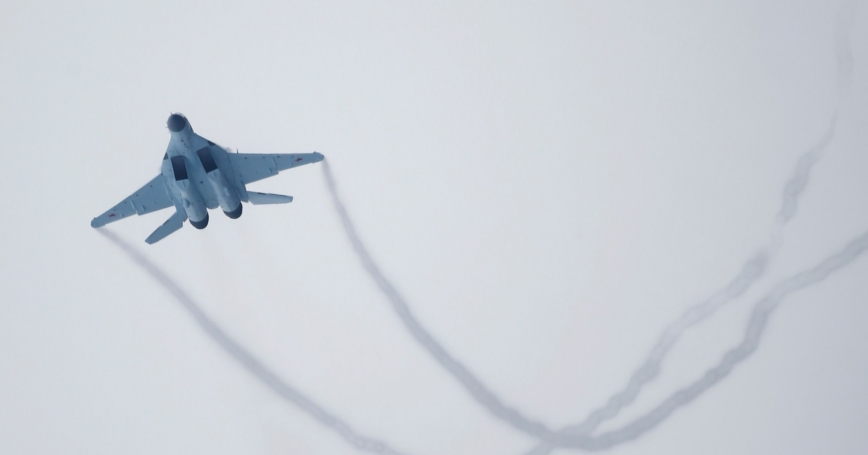 A new multi-role Russian MiG-35 fighter flies during its international presentation at the MiG plant in Lukhovitsy outside Moscow, Russia January 27, 2017

The United States confronts a security environment increasingly defined by growing threats using developing capabilities coupled with non-traditional military strategies. This comes at a time of reduced resources, growing system costs, complex acquisition policies and diminished international standing. Worse, U.S. military leaders have not dealt with a comparable situation for over a generation, so the way forward is unfamiliar. To regain military superiority, or overmatch, the Pentagon has suggested a Third Offset Strategy that focuses on emerging technologies and deterrence as part of a grand strategy.

Likely features needed to regain overmatch are emerging in multiple operational areas: countering Anti-Access/Area Denial (A2/AD), guided munitions; undersea warfare, cyber and electronic warfare, human-machine teaming, wargaming, and development of new operating concepts. A third offset that includes these and other components is a worthy goal, but the way forward is unclear, and the systems that will be needed are uncertain.

Developing ways to respond more quickly to threats or acts of aggression is one way forward. Another is the development of a broad capability to deter aggression and thus reduce the need for quick response. Widespread A2/AD strategies now work against the deployment of traditional build-ups. For example, in recent RAND tabletop war games set, hypothetically, in the Baltics, those playing the role of the Russian forces reached the outskirts of the country capitals in not more than 60 hours—too quickly for those playing the role of the U.S. to respond meaningfully. The U.S. also could seek better means to deal with overwhelming strikes against sea and land-based targets. Operators of missile defense systems are becoming increasingly unable to respond in time to missile salvoes. Worse, the tasks of mounting salvo attacks and defending against them are asymmetric in both cost and feasibility. New, perhaps non-kinetic, approaches to defense against missile salvoes could offer a solution.

So how should the U.S. proceed? We offer two suggestions here: identifying suitable end states and prioritizing concepts that are robust over multiple potential scenarios.

A successful offset strategy might involve identifying critical operational areas in which U.S. advantages are being eroded, then establishing new end states and adapting to them. As a successful historical example, the antisubmarine warfare (ASW) advantage enjoyed by U.S. submarines over their Russian counterparts has eroded sharply since the early 1980s. The U.S. advantage was lost primarily as the Russians recognized and eliminated design flaws in their submarines. The United States has retained as much advantage as possible, but attempting to return to the status quo would be fruitless; it would only self-impose enormous costs. With ASW critical to overcoming A2/AD defenses, the solution was lateral movement: introduce new platforms and systems for ASW and shift U.S. submarines to other critical missions. Submarines are now critical strike platforms able to operate with near-impunity in otherwise largely denied areas and have expanded their capabilities for Intelligence, Surveillance, and Reconnaissance. This example shows how the military's willingness and ability to adapt to new realities can lead to successful offset efforts.

Chinese and Russian developments (primarily in A2/AD systems and concepts) are major challenges. A2/AD is commonly thought of as using long-range strike to attack naval surface forces and fixed targets on land. Surface-to-air-missiles, fighter aircraft and missile-equipped surface ships protect strike assets and further threaten naval forces operating in the area. China has expanded the A2/AD construct by seizing, building up, and militarizing reefs in the South China Sea. Russia has shifted the security balance in the Black Sea, Eastern Mediterranean Sea, and the Middle East by establishing large A2/AD zones featuring overlapping and redundant air defenses, and naval and land-based anti-ship and land-attack strike systems. Russia has also demonstrated the ability to integrate cyber, information warfare and kinetic attacks. The ability to deter and defeat the threats of China and Russia would provide a robust capability to counter most other types of aggression worldwide. Direct applicability to China/Russia scenarios is a useful litmus test for new offset concepts.

The U.S., with its monopoly on nuclear weapons following World War II, briefly enjoyed overmatch against the Soviet Union. That overmatch was threatened as the USSR developed its own nuclear weapons and an overwhelming advantage in conventional forces—which it used to threaten outward expansion. President Eisenhower identified an affordable, asymmetric solution to this challenge: the threat of “massive retaliatory power” using America's growing nuclear stockpile. Eisenhower's solution held the USSR in check for decades and provided a military strategy capable of handling a wide range of military threats. As the Warsaw Pact developed a massive advantage in conventional forces, Secretary of Defense Harold Brown sought a technological advantage over adversaries. This was the 1970s “Offset Strategy.” The Offset Strategy combined capabilities from precision strike; low observable; and space-based communications and navigation technologies. In combination, these capabilities enabled power projection disproportionate to the size of U.S. forces and offset a Soviet nuclear force that had reached parity. This strategy was able to handle a wide range of military threats, but the advantages it conferred are now eroding.

This commentary originally appeared on RealClearDefense on March 20, 2017. Commentary gives RAND researchers a platform to convey insights based on their professional expertise and often on their peer-reviewed research and analysis.