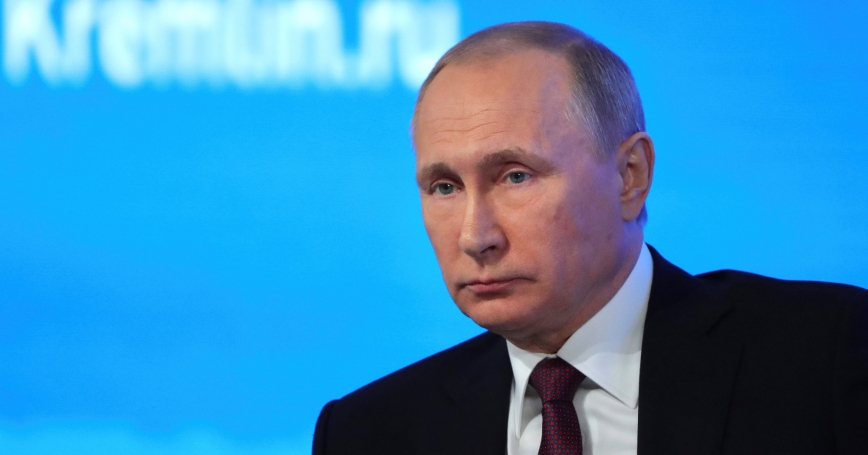 Photo by Sputnik/Mikhail Klimentyev/Kremlin via Reuters

Indications that Russia could intervene militarily in Libya's messy civil war are growing. If it does, the Trump White House will face a tangle of unpleasant choices with far-reaching consequences. Will the new U.S. administration acquiesce to Russia's strongman vision for the region, or push back against Russia's growing influence there?

For months, the Kremlin has sought to draw Libya's eastern potentate General Khalifa Hiftar into its orbit. Hiftar is currently the de facto leader of a bloc of eastern Libyan forces that oppose Libya's internationally recognized government in Tripoli, the so-called Government of National Accord. Negotiations between the two sides are going nowhere and rumors of a potential Hiftar offensive against the Tripoli government have been swirling for months.

Hiftar has been to Moscow and paid a visit to the Russian aircraft carrier Kuznetsov in the Mediterranean, during which he held a video call with Russian Defense Minister Defense Minister Sergei Shoigu. Then, last week, Moscow reportedly deployed troops to a base on Egypt's northern coast just 60 miles from the border crossing with Libya.

There are a few ways to interpret their latest move: It could just be posturing, part of a Russian hybrid warfare strategy aimed at influencing ongoing negotiations over Libya's future. But there are plenty of reasons to believe it may be the early phase of a Russian intervention.

Russian President Vladimir Putin is eager to underscore the challenges that U.S. pro-democracy interventions in the Middle East have faced and offer up an alternative Russian strategy that relies on authoritarian leaders that look a lot like Putin himself. The 2011 NATO intervention in Libya has long been a target of Kremlin criticism and the chance to portray Russia as Libya's savior—as Russia has attempted to do in Syria—must be more than a little tempting for the Russian president.

The chance to portray Russia as Libya's savior must be more than a little tempting for Putin.

Closer ties to Libya would also offer Russia the chance to extend its reach further along the Mediterranean's southern littoral—i.e., NATO's southern flank. Russia could, for example, seek to deploy advanced anti-access, area-denial systems along the Libyan coast, significantly enlarging the anti-access bubble that it has already established in the Eastern Mediterranean with similar deployments in Syria—a bubble that was already raising significant concern with top U.S. military commanders a year ago.

Influence over Libya meanwhile offers Russia leverage over Europe when it comes to the challenge posed by the increasingly deadly central Mediterranean migration route, which begins in Libya.

Libya's high-quality crude is yet another reason for Moscow to throw its weight behind Hiftar. The Kremlin is fixated on the coming global competition for natural resources and the Russian oil and gas company, Rosneft, just signed a new agreement with Libya's National Oil Corporation in February. Despite a few recent setbacks, Hiftar controls a significant amount of Libya's oil infrastructure in the east and has influence over some western fields as well.

A Russian move into Libya would put the Trump team in an extremely tough spot.

A Russian move into Libya would put the Trump team in an extremely tough spot. The U.S. has invested time and energy in supporting the Tripoli government. Moreover, U.S. and allied special forces worked with Libyan militias aligned with Tripoli in a successful counterterrorism operation that ousted the Islamic State from the town of Sirte last year. Russian dominance in Libya could lead Italy to scuttle the sanctions regime the United States and European Union imposed on Russia on account of its annexation of Crimea and invasion of eastern Ukraine in 2014. A deeper Russian anti-access, area-denial pocket would meanwhile be a challenge for U.S. military operations in the region.

If Moscow backs a Hiftar move on Tripoli, would the U.S. step aside and let its Libyan partners get crushed by a Russian-backed force? Or would it try to take action—potentially even militarily—to slow Hiftar down and give these allies a fighting chance of avoiding calamity?

It's not an easy choice.

Supporting the government in Tripoli would require at least some U.S. boots on the ground. A large U.S. deployment might deter a Russian intervention, but would likely meet very strong resistance within the U.S. A small-scale intervention would be more feasible, but even if U.S. advisors operated far from the front lines they would still be at risk should Russian warplanes support a Hiftar advance—as they have for forces loyal to the regime of Bashar Assad in Syria.

Moreover, overt action against a Russian ally would kill the broader U.S.-Russian reset that the White House still seems to want. True, the Trump administration has sent conflicting signals about its views on Russia, with some senior officials evincing near sympathy for Putin, while others clearly harbor deep suspicion. Nevertheless, going toe-to-toe with Russia in Libya would clearly put an end to the Putin-Trump attempt at reconciliation.

The risk, then, is that the U.S. and its allies would end up largely on the sidelines as Russia installs another strongman in the region, and extends its power along NATO's southern flank. This would be a tragic outcome to the story that began with such high hopes in 2011 and another boost to Putin's prestige.

Christopher S. Chivvis is associate director of the RAND International Security and Defense Policy Center and Amanda Kadlec is a policy analyst at the nonprofit, nonpartisan RAND Corporation.

This commentary originally appeared on Fortune on March 26, 2017. Commentary gives RAND researchers a platform to convey insights based on their professional expertise and often on their peer-reviewed research and analysis.