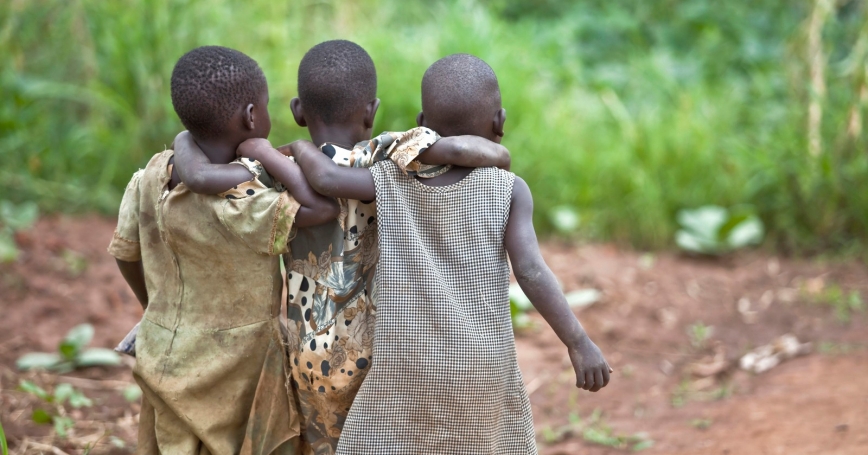 As nations around the world rebuild from protracted armed conflicts, many are struggling with a consequence of war that has largely been ignored by integration programs and policies: How can societies address the unique needs of the thousands of children conceived as a result of sexual violence and exploitation against women and girls during armed conflict?

Referred to as “children born of war,” they represent a particularly vulnerable class of war-affected children.

Over the past five years, grass-roots women's organizations in northern Uganda have been providing valuable lessons on how to integrate these youth in post-conflict societies. These include mitigating future challenges the children might face by mediating family reconciliations and creating economic opportunities for these children through access to land ownership.

Data on these boys and girls, especially in conflict and post-conflict countries in sub-Saharan Africa, are sparse and lacking. Some independent and expert sources offer conservative estimates, saying the number of children born to women raped during the Rwandan civil war ranges from 2,000 (PDF) to more than 10,000. In the eastern Democratic Republic of Congo, up to 17 percent of women and girls who survived conflict-related sexual violence have reported becoming pregnant. In northern Uganda, more than 10,000 (PDF) girls abducted by the Lord Resistance Army (LRA) between 1988 and 2004 became child mothers. Most reportedly bore two or more children before being rescued by government forces.

Research (PDF) from war-affected countries such as Bosnia and Sierra Leone shows that children born of war confront complex challenges, including socioeconomic marginalization, family rejection, stigmatization, and violence. They struggle with issues of identity and belonging (PDF). They're all too often turned into outcasts, rejected by families and communities. That also makes it highly unlikely for their mothers to disclose how they were conceived or help the children access social services.

Being born because of wartime rape 'handicaps children for life.'

Patricia A. Weitsman, the late political scientist and scholar who studied sexual violence and identity in war, has argued that being born because of wartime rape “handicaps children for life.” (PDF) Families and societies can't separate children of war from the circumstance of their conception. Their identities are forever linked with the men who raped their mothers, even when they are raised in their mother's communities, according to Weitsman's research.

A 2016 study by Myriam S. Denov, a McGill University professor, and community-based researcher A.A. Lakor documented the views and experiences of Ugandan children whose mothers were raped while prisoners of the Lord Resistance Army. The youths said their life in captivity was “debilitating and horrific.” But they described their current, post-release lives as worse, due to the stigma and abject poverty they endure. They appear to prefer war to peace, but it is not their fault. Governments and institutions in civil societies have failed to fully and meaningfully integrate the children into postwar life, the researchers said.

There are signs of better ways forward: The Women's Advocacy Network, a group of more than 600 Ugandan women who were LRA abductees, is addressing this issue in a sensitive and creative manner. In November, I spoke with Lucy, a group leader in the Northern Uganda city of Gulu who asked to be identified by her first name. She said the network is striving to find relatives of some war-born children, hoping to pull them from shame and exile, and reuniting them with extended families of their fathers and reintegrating them into communities.

“These children, who are now between the ages of 12 and 20, are asking about their fathers,” Lucy said. In some cases the youths already have been branded as perpetrators “so it's important to connect them to any family member from the father's side that can help them navigate problems they are facing as a result of who they are,” she said.

In some northern Ugandan traditions, children inherit land from fathers or through their paternal line. If war-born children are cast out and cut off from this important resource, the consequences—especially for young men—can be economically devastating and affect the rest of their lives. Without a way to provide for spouses and families, young men will experience greater societal rejection than their female counterparts.

Not every attempt the Women's Advocacy Network makes to reunite children of war with their extended families is successful, Lucy cautioned. Some children were fathered by former soldiers who were abducted and forced to serve in the rebel groups; they may have changed their names and can be hard to find. Even if family members are located, the children can still be rejected.

Since the 2006 ceasefire between the Ugandan government and the LRA rebels, officials and international organizations have used a “transitional justice framework” to offer redress for victims of sexual violence and exploitation—and their children. This process is put into place when existing judicial systems in nations or regions can't fully deal with large-scale or systemic human rights violations. The framework has helped to foster a range of initiatives in post-conflict northern Uganda to establish accountable institutions, give victims options to pursue justice, and to facilitate community dialogues for reconciliation. But it has neglected the long-term needs and challenges of war-born children, according to a 2015 assessment (PDF) by the International Center for Transitional Justice. That group found that officials have focused on mothers, wrongly assuming benefits would trickle down to the children born of war.

The women's network, however, has identified the unique needs of these youths, and the group's push for reunification between children and families may hold promise. The group has benefited from deep community involvement and by having members who are parents of “children born of war.” This has allowed the group to have a broader and more inclusive view of what is needed to achieve a sustainable and holistic integration process for these children.

The network's efforts may provide a model for other countries in the region facing similar challenges. In Nigeria, for instance, the militant Islamic group Boko Haram has abducted over 2,000 women and girls since 2014—and 214 of 700 kidnapped females rescued by the Nigerian army were pregnant. As more girls are rescued, and these women and their children born of war start integrating and reintegrating into their families and communities, organizations will need to consider designing programs that provide immediate relief and services for mothers and their children. Future initiatives also need to take into account the long-term impact of what being a child “born of war" entails—and be sensitive to the complex ways it can affect postwar life.

Mahlet Woldetsadik is an assistant policy researcher at the nonprofit, nonpartisan RAND Corporation and a Ph.D. candidate at the Pardee RAND Graduate School. This blog post was written for the Pardee Initiative for Global Human Progress.