A Turning Point in U.S-Turkish Relations? 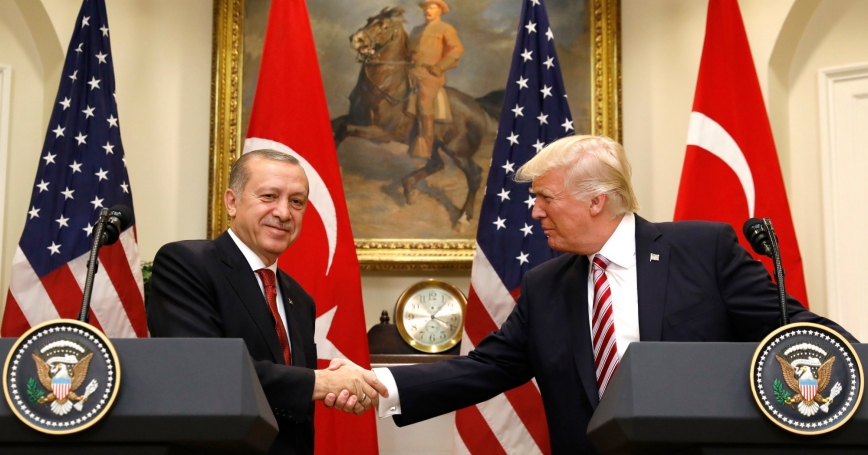 While Turkish President Recep Tayyip Erdoğan and President Donald Trump emphasized the positive aspects of bilateral relations after their meeting Tuesday, the most controversial issue on the agenda—Turkey's vehement objections to Trump's decision last week to provide arms and equipment to the Kurdish People's Protection Units, or YPG—remains a point of contention.

While the Turkish government views the YPG as an affiliate of the terrorist Kurdistan Workers Party, the United States sees it as the most capable force in Syria for taking on the Islamic State group. While senior U.S. officials have been prefiguring this decision for some time, Turkish media have suggested that “Obama administration holdovers” had persuaded Trump to make this decision before the visit, out of fear that Erdoğan might persuade Trump to change course. On his way to Washington, Erdoğan expressed hope that his personal engagement with Trump could resolve the disagreement over arming the YPG and called his visit to Washington “groundbreaking.” In his press statement Tuesday, Erdoğan said pointedly: “It is absolutely unacceptable” to have the YPG as partners in the region, and that “it's going against a global agreement we reached.”

The Turks know that their preferred option—to have the U.S. support a combined assault on Raqqa by the Turkish military and Free Syrian Army forces—will in all likelihood not happen. Nevertheless, Erdoğan made the case against arming the YPG and likely sought assurances that if the arming does proceed, the United States will take concrete steps to help protect Turkey's interests. The Turks' most important security objective in Syria today is to prevent the YPG militias from gaining control of the territory west of the Euphrates River, which would give the YPG control of nearly all of Syrian territory along its southern border. The Turks have a military counterterrorism operation underway in northern Syria designed, in part, to prevent this outcome.

According to media reports, U.S. officials have assured the Turks that the U.S. will provide the YPG with just enough weapons and ammunition to take Raqqa and will prevent the group from remaining in control of Raqqa once the Islamic State group is expelled. The Turks do not have great confidence in U.S. ability to make good on such a commitment, and say they heard similar promises with respect to the liberation of the Syrian towns of Manbij and Jarabulus, which remain under YPG control after Islamic State group fighters were evicted. Erdoğan may also seek some assurance from the United States on how much territory the YPG would be allowed to control in northern Syria once the Islamic State group is defeated, and perhaps an agreement in principle about how the United States will work with Ankara over the next few years to protect Turkish interests in the region.

If Erdoğan is not assured that the U.S. will take concrete steps to prevent this outcome in northern Syria, he has already signaled that Turkey would be prepared take further unilateral military action to prevent it. Before leaving Friday for Beijing and Washington, Erdoğan said he would not refrain from striking the YPG forces. “We can come unexpectedly some night,” he said, “Let them live in fear.”

This approach could result in Turkish strikes against U.S. forces working in support of the YPG, as reportedly nearly happened April 25 when Turkish airstrikes around Mount Sinjar in Iraq, killed five Kurdish Peshmerga forces from the Kurdish Regional Government (Turkey's closest ally in the region) and about 20 YPG fighters. The airstrikes were designed to disrupt a Kurdistan Workers Party supply line, according to the Turkish General Staff. Such a friendly fire incident could irreparably harm relations with Washington and disrupt mutually beneficial cooperation in Syria and elsewhere in the region. If the differences over the YPG and Syria strategy deepen, Turkey could severely restrict or shut down U.S. access to Incirlik Air Base in southern Turkey, which the U.S.-led coalition has used as the main staging area for air attacks against the Islamic State group in Syria and in northern Iraq.

The stakes at this meeting and its outcome are high for both Turkey and the United States, and could mark a major milestone in the relationship.

This commentary originally appeared on U.S. News & World Report on May 17, 2017. Commentary gives RAND researchers a platform to convey insights based on their professional expertise and often on their peer-reviewed research and analysis.