What Does 'America First' Look Like in the Arctic? 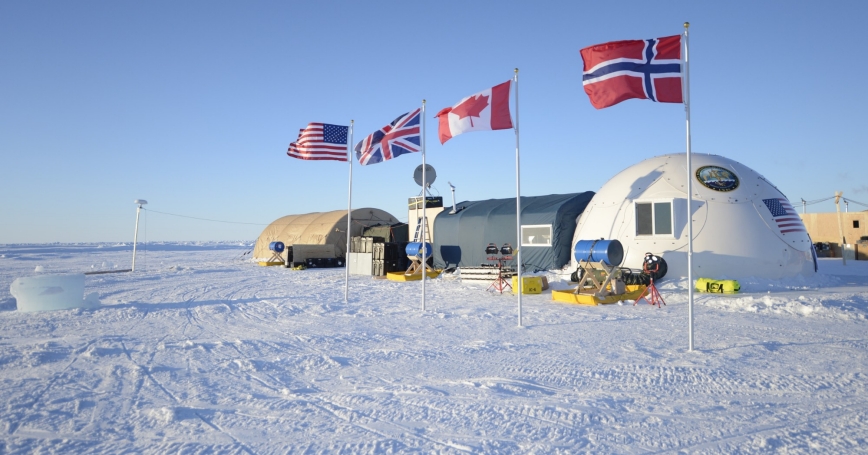 Ice Camp Sargo in the Arctic Circle was the main stage for ICEX 2016, an exercise designed to research, test, and evaluate operational capabilities in the region

Earlier this month, the United States officially passed the baton for Arctic Council chairmanship to Finland at a meeting in Fairbanks, Alaska, ending two years at the helm of the world's principal Arctic diplomatic body.

In the past two years, the United States has also worked with other Arctic nations to expand Coast Guard cooperation in the region and prevent fishing in the Arctic high seas until additional research can be conducted and measures to manage international fishing are in place. While this view of the Arctic was clearly in line with President Barack Obama's policies and the priorities articulated in the 2013 National Strategy for the Arctic Region, little is known of his successor's intentions with regard to this strategically important region.

How will the Trump White House's “America First” orientation shape the Arctic in years to come?

In Fairbanks last week, Secretary of State Rex Tillerson made it clear that the Trump administration is reviewing what its approach to climate change will be, and that although it will consider points of view from other nations, U.S. policies will be made in the best interests of America. During his presidential campaign, Trump promised to reverse policies that take action to reduce greenhouse gas emissions. In late March, he signed an executive order aimed at undoing Obama's Clean Power Plan, and he has cast doubts on whether the United States will remain party to the Paris 2015 agreement that is aimed at reducing greenhouse gas emissions and encouraging resilience in the face of climate change impact.

The Arctic is experiencing global warming at an accelerated rate — sea ice levels hit a record low in late March.

This seeming shift in U.S. climate policy away from greenhouse gas reduction is of particular significance for the Arctic, which is experiencing global warming at an accelerated rate — sea ice levels hit a record low in late March. As detailed in a recent Arctic Council report on the region encompassing the Bering, Chukchi and Beaufort Seas, some Americans are experiencing these changes firsthand. Native Alaskans are seeing higher sea levels at the coast; melting permafrost that threatens to destroy existing infrastructure; and the slow vanishing of the protective sea ice barrier that used to be there for much greater periods of the year.

The imprint of the Trump administration on the Arctic is already extending beyond greenhouse gas emissions levels. Another executive order signed in April will pave the way for more offshore oil and gas drilling in the Arctic and elsewhere, assuming that it survives litigation in the U.S. court system. If the United States ratified the United Nations Convention on the Law of the Sea — the international agreement outlining rights and responsibilities for nations using the world's oceans and resources — it would provide the United States with the opportunity to set forth a claim for the extension of its continental shelf, potentially extending U.S. rights to drill for oil and natural gas off the Arctic coastline in Alaska.

Yet the U.S. Arctic may not be ready for expanded oil and gas exploration. At present, there is precious little infrastructure in Alaska (the U.S. door to the Arctic) that can support an expansion of economic activity. Only local communities and a few onshore hydrocarbon and mineral sites can manage a year-round presence, and their capacity is too small to provide the search-and-rescue or environmental disaster management capabilities at the same standards enjoyed by the Lower 48.

The U.S. Coast Guard consistently maintains a small, warm season presence in the region. There are year-round military and Coast Guard operating locations further south in Alaska but getting from there to the Alaska north of the Arctic Circle to perform missions is difficult due to a lack of transportation infrastructure and the fact that several assets are strategic or not designed for the harsh Arctic operating environment. Put differently, the capabilities required to support an increase in oil and gas exploration are, at this point, largely nonexistent.

As a result, the Trump administration's commitment to increasing America's energy independence through the expansion of domestic drilling may mean more infrastructure investment for the Arctic, and with the right market conditions (namely, if oil prices were to rise again), such investment could also be picked up in part by the private sector. With that objective in mind, the White House could choose among various projects that would begin to address these needs. One is the development of a deepwater port (Nome, Alaska is a potential site), along with the building of additional airfields and permanent roads in areas where ice roads no longer enjoy a reliably long season. The construction and maintenance of these roads could be hindered by continued melting of frozen ground, which would need to be considered in any road infrastructure plans. Improved satellite-based and cyber communication infrastructure would also aid economic development.

Science is one important dimension of cooperation in the Arctic that has remained strong.

An expansion of Arctic infrastructure and economic activity, however, requires in turn a continuation and improvement of Arctic scientific knowledge. Such knowledge is essential to develop the technologies needed for Arctic operations and to ensure the safety of operators. Science is also one important dimension of cooperation in the Arctic that has remained strong despite occasional tensions fueled by U.S. disagreements with Russia in other parts of the world such as Syria and Ukraine. This includes work by the Arctic Council, itself a key example of cooperation among the eight Arctic countries (Canada, Denmark by way of Greenland, Iceland, Norway, Sweden, Finland, Russia and the United States.).

The council's efforts are beneficial to the well-being and development in the region, but they are also necessary to help ensure safety and contain any human- or nature-made disaster that might occur for which no single country alone has the capabilities to respond. In the frigid north, the concept of “America First” will take Americans only so far. Instead, information sharing, cooperation and diplomacy have benefited all Arctic nations, including the United States, over the past decades.

While it is too early to precisely discern the content of the Trump administration's Arctic policy — assuming there will be one — early executive decisions point toward a picture of the Arctic that is principally an oil and gas reserve. While this may provide a welcome opportunity to develop much-needed infrastructure, particularly for search-and-rescue operations, it may ignore the many other facets of the Arctic that also matter to U.S. interests. The Arctic is a canary in a coal mine for climate change; a forum in which the United States can engage regional partners, including Russia; hosts potentially valuable shipping routes and fisheries; a site where scientific discovery can be advanced; and a home to Americans whose interests need to be taken into account.

Managing changes and development in the Arctic requires balancing many interests. If policies for the region take this big picture into account, then the United States won't miss an opportunity to advance its interests in the Arctic.