Can We Predict Where Terrorists Will Strike Next? 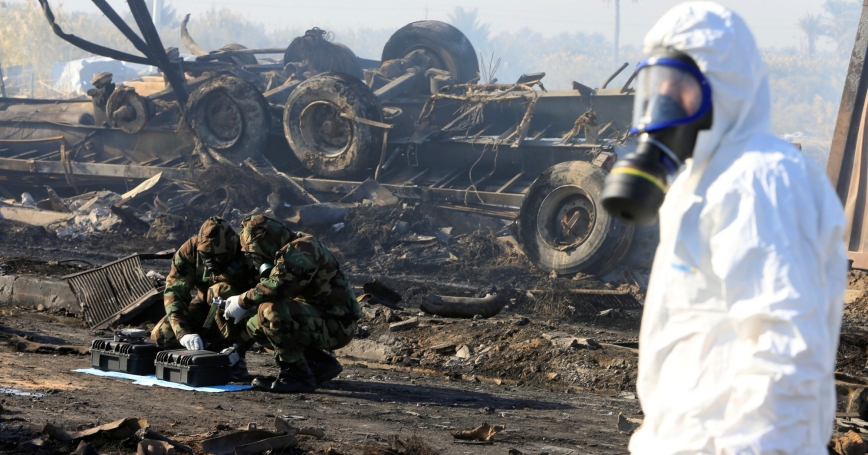 Chemical experts inspect the site of a suicide truck bomb attack at a petrol station in Hilla, Iraq, November 25, 2016

Analysts and intelligence officials periodically get together to anticipate what tomorrow's terrorists might do.

Will terrorists threaten mass destruction with nuclear weapons or global pandemics with designer pathogens? Will cities be contaminated with dirty bombs? Will tech-savvy terrorists remotely sabotage power grids or other vital infrastructure via the internet?

Are terrorists capable of triggering electromagnetic pulses that fry electronics, reducing modern technology-dependent society to a Mad Max movie? Will they shoot down airliners with hand-held missiles or bring them down with miniaturized bombs concealed in laptops or perhaps surgically implanted? Will they attack crowds in stadiums with drones carrying hand grenades or anthrax or merely white powder to provoke deadly panics?

Or might there be a mass uprising of individual fanatics ramming trucks into pedestrians, attacking diners with machetes, and carrying out other primitive, but nearly-impossible-to-prevent attacks?

The scenarios are endless and unnerving. All of the ones above have been discussed publicly. And if analysts can think about them, one presumes, so can terrorists who fill the internet with their ambitious fantasies.

Some of these are pretensions of omnipotence that make their authors feel good; some support the terrorists' campaign to promote fear.

Few can be entirely disregarded. Had the 9/11 hijackers been arrested one week before their attack, their plan might have been dismissed as a far-fetched scheme, which it was.

Had the hijackers been arrested one week before 9/11, their plan might have been dismissed as far-fetched, which it was.

Secretary of Homeland Security John Kelly recently warned that if Americans knew what he knows about terrorism, they'd “never leave the house”—a dismaying message coming from a Marine four-star general.

There are several ways analysts try to gaze into the future. One is to look at trends in terrorism itself and see where these might take us.

Extrapolation doesn't always work. According to data from the Global Terrorism Database, from 1970 to 2001, fatalities in the worst terrorist attacks increased by an order of magnitude every 10 to 15 years, culminating in the 9/11 attacks, in which thousands died.

It was widely presumed immediately after 9/11 that terrorists would continue to escalate by orders of magnitude, pushing the analysis toward scenarios involving tens of thousands or even hundreds of thousands of fatalities. Death on this scale could be achieved only with the use of biological or nuclear weapons, which became a presumption.

A second way to look at the future is to try to forecast the state of world affairs and examine how this might affect the trajectory of terrorism.

Analysts correctly anticipated that the U.S. invasion of Iraq would mobilize new cohorts of jihadist extremists, but many mistakenly thought that the rise of anarchist elements in the wake of the 2008 economic crisis might reinvigorate the violent edge of the left—it did not. It is expected that the conflicts in Syria and adjacent areas will remain sources of future terrorist violence.

A third approach is to look at how terrorists might exploit new technologies coming on line.

Years ago, we worried about surface-to-air missiles, which terrorists have rarely used, but we missed the internet. Then in its infancy, the internet was to have a profound impact on terrorist communications, recruiting and strategy, underscoring that terrorism is mainly about manipulating perceptions. Analysts currently are looking at terrorists using drones and exploiting the Internet of Things.

A fourth approach is to try to think as terrorists and conjure up scenarios of future attacks.

This is a way to prevent failures of imagination, but possibilities are often misread as forecasts. In the early 1980s, I opined that terrorists might fly hijacked airliners into large buildings. This involved no prescience on my part—in 1972, hijackers had threatened to fly a hijacked plane into the nuclear facilities at Oak Ridge, Tennessee. I repeated the idea over the years only as a possibility.

Any review of what we might have forecast about the future trajectory of terrorism in the past should be humbling. Fifty years ago, who knew that the following decades would see the dramatic rise of terrorism in its contemporary form? One of the major events was the 1967 Six-Day War, which would lead to Israel's occupation of the West Bank, contributing to the rise of the Palestinian terrorism.

Who in 1977 forecast the emergence of Islamist extremism in the form of the Iranian Revolution, the rise of Iranian-supported Shia extremism in Lebanon, and an escalation of terrorist violence with massive vehicle bombs and suicide attacks becoming routine?

The Middle East would remain a major theater of concern for the United States during this decade, and Washington would increasingly resort to military force to retaliate for attacks on U.S. Marines in Lebanon, apprehend terrorist hijackers escaping from Egypt, and deter further Libyan support for terrorist attacks that had cost American lives.

Hardly any analysts in 1987 foresaw the fall of the Soviet Union in 1989, which would fundamentally change the world's political environment and significantly affect the course of terrorism.

By 1997, al Qaeda had already declared war on the United States, but 1998 would see a dramatic escalation of that campaign, culminating in the 9/11 attacks that would lead to the Global War on Terror—a massive worldwide effort that continues to this day.

And in 2007, who foresaw the uprisings that would sweep across the Arab world in 2011, distracting governments, creating new opportunities for jihadists, and leading to Syria's civil war and the rise of ISIS?

Terrorism has become a mode of armed conflict—it will persist. But the worldwide growth in the volume of terrorism is misleading. It reflects the invention of the category of terrorism, better reporting worldwide, and the now routine employment of terrorist tactics in irregular conflicts.

Terrorism is a global phenomenon. But outside of conflict zones, attacks occur only occasionally.

Although terrorism is a global phenomenon, outside of conflict zones, where terrorist campaigns comprise merely one aspect of ongoing wars, terrorist attacks occur only occasionally. In 2015, more than 55 percent of all attacks took place in Iraq, Afghanistan, Pakistan, India, and Nigeria, and 74 percent of all fatalities occurred in five countries Iraq, Afghanistan, Nigeria, Syria, and Pakistan.

Terrorism remains concentrated in the Middle East and bordering areas of North Africa and western Asia. Current conflicts in these areas are likely to persist and will remain the major source of the terrorist threat. For the United States, terrorism and Middle East policy have become inextricably intertwined.

Events external to terrorism can have enormous effects on the course of terrorism: the Six-Day War and Vietnam War as catalysts for protest and ultimately violence; the Iranian revolution; the Soviet invasion of Afghanistan and the rise of Islamic extremism; the fall of the Soviet Union; the Arab Spring.

Our worst fears have not been realized. Terrorists have seldom used chemical or biological weapons and then not very effectively. There has been one incident of radiological terrorism, carried out as a publicity stunt, and no nuclear weapons. Nonetheless, the lure of doom continues, with many arguing that it is not if, but when terrorists will employ such weapons.

Tactical innovations include suicide bombings, multiple suicide bombings, increasingly random attacks on soft targets, the use of vehicles in ramming attacks. This reflects the enlistment of remote recruits with limited capabilities, which is itself a consequence of social media.

Terrorism appears to have escalated horizontally rather than vertically. Instead of weapons of mass destruction, there has been a proliferation of low-level attacks—frustrating, but certainly preferable. The trick will be to use what is known about terrorism now to predict and prevent new attacks.

This commentary originally appeared on Newsweek on June 19, 2017. Commentary gives RAND researchers a platform to convey insights based on their professional expertise and often on their peer-reviewed research and analysis.