The Big Bet: Withdrawing from the Paris Climate Agreement 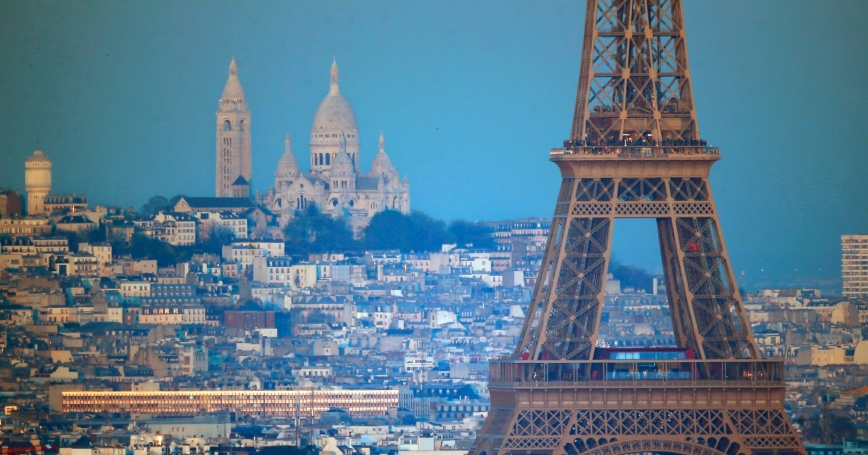 The Eiffel Tower is seen in front of the Sacre Coeur Basilica on Montmartre in Paris, France, during the 2015 World Climate Change Conference

President Trump's decision yesterday to initiate the withdrawal from the Paris climate agreement could have far-reaching consequences for U.S. global leadership on many issues, not just on global efforts to reduce greenhouse gas emissions. The decision was framed as strengthening American sovereignty and protecting American jobs, but a likely outcome is to threaten American jobs and reduce American influence and autonomy.

The risks and rewards of the president's decision with respect to global leadership are highly asymmetric: commitments undone at the stroke of a pen cannot easily be restored with similar speed. Years of good-faith negotiation, relationship building, and leadership are quickly lost and can only be rebuilt slowly, brick by brick. For the climate system, that translates into higher magnitudes of global warming and greater potential for irreversible impacts. For global diplomacy, the question is how the U.S. will manage its diminished role in the world in the face of many other challenges to the world order, from North Korea to the Middle East.

This decision was not unexpected, given the president's campaign promise to withdraw from the climate agreement. Earlier this year, RAND published a report that articulated three distinct options for U.S. strategy in the world: “Come Home America,” which would emphasize domestic renewal and international restraint; “The Indispensable Nation,” in which the U.S. would be a promoter of world order; and “Agile America” in which the U.S. would primarily focus its efforts on adapting and competing economically in a changing world.

The decision could cause the U.S. and its citizens damage if climate change proves significant.

The decision, however, could cause the U.S. and its citizens damage if climate change proves significant; if the green energy revolution continues to pick up steam; and if the rest of the world recommits itself, under Chinese and/or European leadership to the Paris agreement.

The decision carries significant economic risks, the largest being a hugely consequential bet that climate change will not prove to be severe, at least not for the U.S. It also assumes that the U.S. will benefit from a bilateral approach, that it can negotiate new agreements, that climate change will be small, that fossil fuels are the energy of the future, and that the withdrawal will unravel global emission reduction efforts. The Trump administration is rolling the dice in a game that the U.S. cannot control.

In addition, the “Come Home America” option also allowed for the inclusion of backup plans in case things went wrong. These included building climate resilience into U.S. critical infrastructure, mitigating the impacts of rising seas and extreme weather and continuing investment in research and development of low-carbon technologies. But the president's recent 2018 budget proposal has no such backup plan—rather, it would dramatically cut such investments. In other words, there is little evidence of such a hedging strategy, and so the U.S. could be left with a large and uncovered exposure to risk.

The economic case for withdrawing from the Paris agreement is not well supported by the evidence.

The economic case for withdrawing from the Paris agreement is also not well supported by the evidence. This decision seems based entirely on the near-term savings from not reducing the nation's greenhouse gas emissions, while ignoring the long-term costs and associated risks. However, the overwhelming support of U.S. corporations for the U.S. remaining a party to the Paris agreement suggests a very different business case than the one in support of withdrawal. As many business leaders in the U.S. and abroad have articulated, the world is awash in opportunities for economic gain in this period of massive shifting of energy technologies. Trillions of dollars will be invested in new energy systems in the coming years. The U.S. may have just ceded to other countries economic leadership and the new jobs in these growing industries.

The RAND report also considered the geopolitical consequences of a U.S. withdrawal from the Paris agreement: “Doing less always runs the risks that adversaries will do more and challenge U.S. preferences. Countries that play a global role bear the risk and financial burden of doing so, and reap the rewards in power and influence. If and when the public mood shifts in favor of activism, the U.S. could find that power is more difficult to regain than sustain.” Those familiar with the history of U.S. climate policy may find similarities with President George W. Bush's 2001 decision to withdraw from the 1992 Kyoto Protocol. But there are major differences. Kyoto only covered a small number of countries. China, for instance, had no emission reduction commitments. So there were still opportunities for bilateral agreements outside Kyoto. The same is not true today if the U.S., Syria, and Nicaragua remain the only countries outside the Paris deal.

The U.S. has now offered China a golden opportunity to fulfill a part of its dream of regional and global leadership. Yesterday, while the White House was preparing to announce its withdrawal, leaders from China and the European Union were announcing their intention to bolster their partnership to address climate change. No doubt, this display of leadership did not go unnoticed in the capitals of other nations.

The formal withdrawal from the Paris climate agreement will take years to unwind. Between now and 2020, we will have the chance to observe the behavior of states, cities, and businesses in the U.S. with respect to their greenhouse gas emissions reductions. We also will see the consequences of the U.S. withdrawal on the behavior of the 190 other countries that signed the agreement. The challenge for all parties is to find a way to minimize the downside risks that the president has thus far chosen not to hedge against.

This commentary originally appeared on Inside Sources on June 2, 2017. Commentary gives RAND researchers a platform to convey insights based on their professional expertise and often on their peer-reviewed research and analysis.