The U.S.-France Dustup Over Counterterrorism in the Sahel 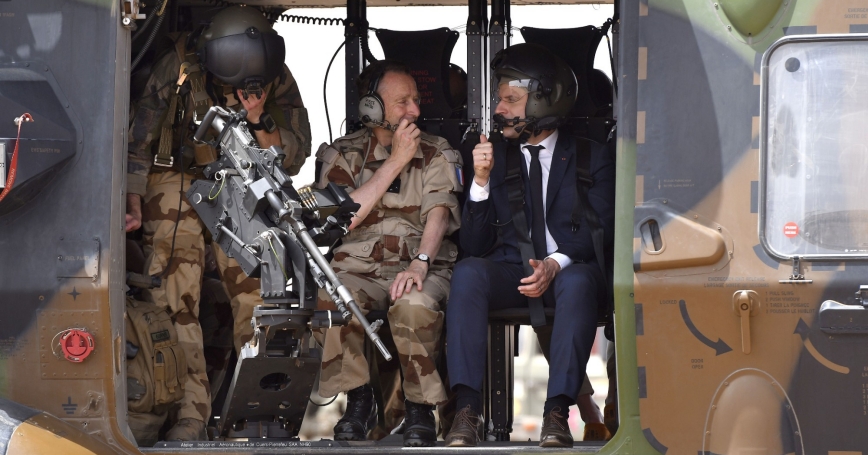 French President Emmanuel Macron rides in a helicopter as he visits French troops in Africa's Sahel region in Gao, northern Mali, 19 May 2017

The reported clash between France and the U.S. in the United Nations over France's plan to create a regional African security force in the Sahel region of the continent is a reminder that however strong Franco-American cooperation has become, there still appears to be a failure to work together at a strategic level. Indeed, it seems that all too often the two powers, though they no longer trade jabs and undermine each other as they have in the past, engage in what child psychologists refer to as "parallel play," meaning they act adjacent to one another but not together.

The clash is over a French-sponsored resolution calling for the creation of a 5,000-man security force assembled from the group of Sahelian countries known as the G5 Sahel: Burkina Faso, Chad, Mali, Mauritania and Niger. The plan has the backing of all five countries plus the African Union. France wants the force to supplement its own roughly 5,000-strong counterterrorism force known as Operation Barkhane and, further down the road, provide France an exit strategy. The force would also supplement the U.N.'s existing Multidimensional Integrated Stabilization Mission in Mali, which has a much more limited mandate than what the French wish to give the new entity.

The U.S. along with the U.K. opposes France's resolution. The reasons are not entirely clear, though the French media singles out money: The Trump administration is keen on cutting the U.N.'s peacekeeping budget and does not want to pay for a new force. To this, we must add the administration's skepticism regarding the efficacy of multilateral operations in Africa, as well as the fact that the U.S. regards the capabilities of the African military in the Sahel as limited at best, despite the U.S. having spent millions of dollars for more than a decade trying to improve them. There are, moreover, real questions to be asked regarding why a new G5 force would be any better than what already exists, given that the security services of the member countries are already in the fight and already working with Operation Barkhane and the Multidimensional Integrated Stabilization Mission in Mali. The region, moreover, poses particular challenges to any force due to its dimensions, terrain and climate. Any force operating there requires significant logistical and organizational abilities, not to mention the requisite fighting skills.

The French might envision the force as a way to enhance the contributor nation's efficacy at the very least by opening up an additional funding stream, and the French, for a variety of reasons, have been eager to internationalize their counterterrorism campaign in the Sahel. Their forces are overstretched and insufficient for accomplishing much beyond whack-a-mole in so vast a territory. France quite simply could use whatever help it can get.

The U.S. should support France, although this would not mean signing on to whatever idea the French come up with. In this case, it does not appear as if Paris consulted with Washington, and there are good reasons to be skeptical of the draft resolution. On the other hand, it also can be said that Washington has only vague ideas about what to do in the Sahel and is primarily banking on a variety of existing piecemeal programs intended to improve governance and promote security sector reform, while letting the French do the dangerous work of shooting and being shot at, and on supporting the Multidimensional Integrated Stabilization Mission in Mali, which is getting badly mauled. One can argue that the U.S. dislikes the French plan but does not have a better one to offer.

What the clash in the U.N. shows is that it is time for Paris and Washington to get together—with the G5 nations, of course—and draft together a strategy for achieving shared objectives in the Sahel. The French cannot do it alone or even with the support of the G5. The U.S. would be penny wise but pound foolish to stay aloof or even just uphold the status quo.

This commentary originally appeared on U.S. News & World Report on June 19, 2017. Commentary gives RAND researchers a platform to convey insights based on their professional expertise and often on their peer-reviewed research and analysis.