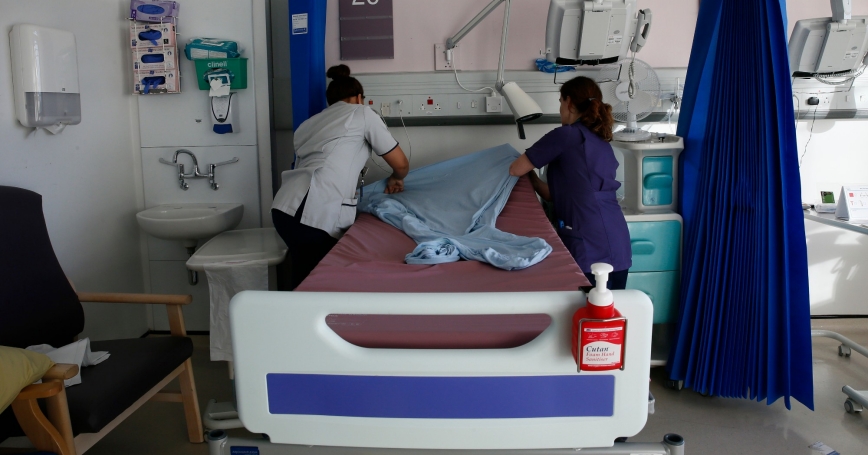 Nurses prepare a bed on a ward at St Thomas' Hospital in central London January 28, 2015.

NHS England's Five Year Forward View says, “The traditional divide between primary care, community services and hospitals—largely unaltered since the birth of the NHS—is increasingly a barrier to the personalised and coordinated health services patients' need.” There seems to be an important opportunity for community hospitals within new care models being developed, but limited evidence of their explicit involvement in England.

There is a growing interest in the 300 community hospitals in England, 219 of which have beds, despite some facing an uncertain future. This is partly the result of an increased focus on shifting services closer to people's homes and delivering more integrated care locally.

RAND Europe, the European Observatory on Health Systems and Policies and Bournemouth University were funded by the National Institute for Health Research to explore how NHS England can advance community hospitals and services in England.

The study drew on lessons from comparable hospital models in five other countries—Norway, Finland, Italy, Australia and Scotland. Overall, the evidence suggests that a more strategic role for community hospitals might be timely within the NHS in England.

The study's findings show that there is potential for community hospitals to address challenges within the NHS, notably through easing the pressure on acute hospitals and offering an effective and efficient alternative for people living with long term conditions. Currently 15 million people in England have a long term condition, which takes up 50 per cent of general practitioner visits, 70 per cent of the days patients spend in hospitals and 70 per cent of the overall NHS budget.

Community hospitals can offer a wide range of services that can be responsive to the needs of the local population.

Community hospitals can offer a wide range of services that can be responsive to the needs of the local population. These cover the entire spectrum of care provision, from preventative and primary care, through to inpatient and outpatient medical and surgical care.

Where Do They Fit

However, at a time when some other countries are seeking policies to strengthen the role of community hospitals, their role within the health system in England is not properly defined. Often community hospitals will be reactive to the needs of the larger hospitals rather than taking on the established role of acting as an interface between primary and secondary care and between health and social care or community services.

Indeed, the tension between the overall health system and where community hospitals fit in was present across all five countries studied.

Further challenges faced by community hospitals, which are often based in remote locations, include attracting and retaining suitable staff and maintaining a diverse employee skill set. Infrastructure and IT can also be a challenge, particularly where community hospitals are seeking to deliver integrated care.

NHS England will need to directly address the challenges associated with community hospitals, particularly around the workforce and its cost.

Overall, there is potential for community hospitals to be better integrated into the current healthcare system in England. Indeed, they can play an important role in the middle of the patient journey between the home and the hospital and the hospital and the home. However, NHS England will need to directly address the challenges associated with community hospitals, particularly around the workforce and its cost.

If these challenges are addressed and the role of community hospitals within the English health system is properly defined, it could provide positive benefits to the health service. It seems that, if done correctly, community hospitals could be a traditional solution to help address some of the modern day challenges of the NHS.

Emma Pitchforth is a senior healthcare researcher at RAND Europe. Edwin van Teijlingen is Professor of Reproductive Health Research at Bournemouth University. Ellen Nolte is Head of London hubs at the European Observatory on Health Systems and Policies. All three were involved in the study ”Community hospitals and their services in the NHS: identifying transferable learning from international developments scoping review, systematic review, country reports and case studies.”

This commentary originally appeared on Health Service Journal on July 11, 2017. Commentary gives RAND researchers a platform to convey insights based on their professional expertise and often on their peer-reviewed research and analysis.