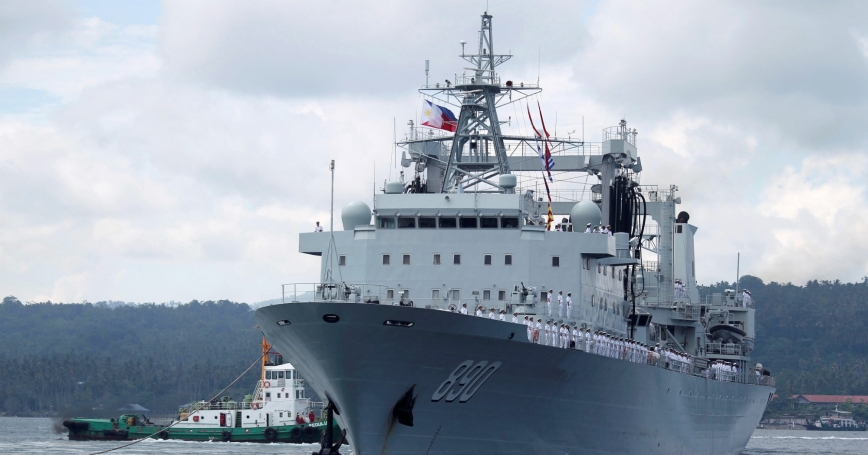 A Chinese naval ship departs after a visit in Davao city, southern Philippines, May 2, 2017

China is investing heavily in its military modernization program as it aims to extend its power, not only in the region, but globally. This has been a key focus of Chinese President Xi Jinping in the run up to the Communist Party Congress later this year, where he is expected to be designated for a second term as general secretary of the party and as president. The Cipher Brief's Will Edwards asked RAND Corporation experts, East Asia senior analyst Jeffrey Engstrom and political scientist Michael Chase, to explain China's expansion of its military force projection and how it will impact U.S. goals in the region.

China is investing heavily into improving its ability to project power beyond its borders. What are some of the capacities it is acquiring/expanding?

Beyond the attention-grabbing acquisitions of aircraft carriers and large amphibious ships, the People's Liberation Army (PLA) is also acquiring less heralded, though absolutely necessary platforms to engage in both regional and global power projection. These include the steadily growing fleet of at-sea replenishment ships, enabling naval combatants to operate on-station for long periods of time. It also includes the recently developed Y-20 heavy transport aircraft, allowing the PLA to rapidly send forces and equipment globally.

Of course, to achieve substantial capacity for power projection, the PLA still must invest in large numbers of these platforms. Furthermore, it must also develop other capabilities, including a more capable and larger tanker aircraft fleet to provide air refueling to its large and increasingly diverse fleet of combat aircraft....

Jeffrey Engstrom specializes in Asia-Pacific security issues and foreign policy at the nonprofit, nonpartisan RAND Corporation. Michael S. Chase is a senior political scientist at RAND and a professor at the Pardee RAND Graduate School.