'Game of Thrones' Dragons, Nuclear Weapons, and Winning Whatever the Cost 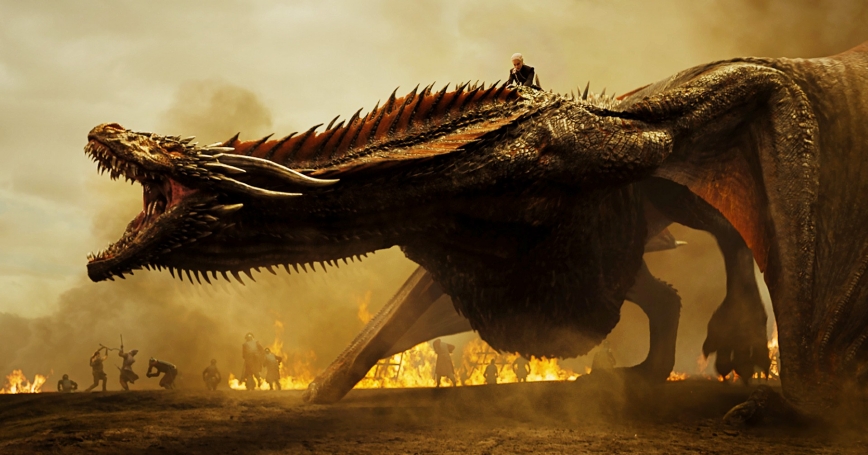 Game of Thrones, HBO's hit fantasy series, is just that—fantasy—and nothing more. But part of what makes the show so engrossing is its exploration of themes that resonate with real-world problems, particularly those associated with power and war.

The military use of dragons and the dilemma they pose is one recent example. In “The Spoils of War,” the fourth episode of this season, viewers get their first real look at how devastating a dragon can be. Daenerys Targaryen, in her bid to seize the throne of author George R.R. Martin's fictional Westeros, flies one of these beasts into battle and quite literally turns the opposing army to ash.

Dragons aside, Daenerys faces a difficult question that is familiar to real-world military powers. Should she exploit the advantage her dragons provide to force a swift and decisive victory whatever the human cost—chiefly by annihilating King's Landing, the seat of her rival? Because Daenerys views herself as an emancipator and does not wish to be “queen of the ashes,” she holds back, seeking victory through a more limited, proportionate use of force. So far in the show, Daenerys' idealism comes at a high price. She squanders the opportunity to win a quick and decisive victory, loses allies and finds herself having to play a much longer and more difficult game than she would have otherwise—possibly with more aggregate bloodshed by the time she's done.

Dragons are a game changer for warfare in Westeros. But if Daenerys uses them to “melt castles and burn cities,” there's no going back.

Many critics have compared Daenerys' dragons to nuclear weapons, a comparison that author Martin and Matt Shakman, director of “The Spoils of War,” have also made. Timothy Westmyer, a nuclear weapons expert, wrote a thoughtful article on the comparison in 2014 in the Bulletin of the Atomic Scientists. The comparison is easy to understand; dragons are a game changer for warfare in Westeros. But if Daenerys uses them to “melt castles and burn cities,” as potential ally Jon Snow warns her against doing, there's no going back.

As a military analyst and historian, I can see two sides to the issue—the argument for holding back out of some sort of humanitarian or political consideration, and the argument for doing whatever it took to bring conflict to a quick and decisive conclusion.

Proportionality—the refusal for one reason or another to bring to bear an advantage that might make a contest one-sided—is risky. It increases the probability of losing, or of achieving no more than a partial victory. Sometimes pulling punches militarily speaking results in more suffering, not less, if one's “kindness” extends a conflict rather than bringing it to a quick conclusion. This is why, tactically speaking, most military leaders and planners invariably seek what today's military calls “overmatch,” meaning one fights only when success is virtually guaranteed, usually through overwhelming numbers or firepower.

A compelling example of a fair fight between two sides of relatively equal strength is the battle in 1916 between France and Germany at Verdun, France. Neither side possessed a significant advantage, and, like exhausted heavyweight boxers, they traded kidney punches while locked in an embrace. The battle lasted 10 months; roughly 150,000 men died on each side. Germany, the attacker, failed to achieve its objectives and nothing decisive resulted. One result of the trauma, at least indirectly, was that 40 years and another war with Germany later, France acquired dragons—that is, nuclear weapons.

In Game of Thrones, just as in in the real world, no one can afford a Verdun. Daenerys' military strength is finite; she only has so many men and horses. It's not clear how she (or her opponents) can feed her forces and keep them in the field, an issue that is hinted at several times during the show. If she wants to win and avoid losing all of her soldiers, she needs to press her advantage.

Interestingly, prior to the introduction of nuclear weapons, U.S. policy was to do whatever it took to win its larger wars, even if that meant annihilating cities—something that did not require atomic bombs. The U.S. killed hundreds of thousands of civilians in World War II, and few have disputed the rationale for the bombing campaigns even if the practical utility of the killing has been questioned. Similarly, few historians disagree with President Truman's choice to drop atomic bombs on Hiroshima and Nagasaki. Those familiar with the carnage on the islands of Peleliu and Iwo Jima sympathize with Truman's desire to end the war as quickly as possible while avoiding invading Japan. Provided with dragons, Truman used them. America won completely, decisively, more rapidly, and possibly with less bloodshed than if Truman had acted otherwise.

There are critical differences between the reality of nuclear weapons and the fantasy of dragons. Countermeasures can be taken against dragons.

Yet there are critical differences between the reality of nuclear weapons and the fantasy of dragons. Countermeasures can be taken against dragons, something the character Qyburn (sort of the chief scientist of Daenerys' rival, Cersei) argued, and the mercenary Bronn demonstrated by using one of Qyburn's anti-dragon weapons (essentially a large crossbow) during the battle in “Spoils of War.” Bronn did not kill the dragon, but he proved the concept; in episode six, a different and altogether more dangerous foe succeeded where Bronn failed and killed a dragon.

Worse, the new foe acquired a dragon of its own, which Martin has made clear is the ultimate anti-dragon weapon. “It is no easy thing for a man to be a dragonslayer,” he wrote, “but dragons can kill dragons, and have.” Thus Daenerys is no longer certain to possess “overmatch,” at least not against the new enemy, and she will have to be more circumspect about how she uses her remaining beasts in the future. In contrast, there are effectively no countermeasures to nuclear weapons other than more nuclear weapons for deterrence.

Although Daenerys no longer has a monopoly on dragons, the problem she faces is not comparable to what American presidents had to deal with once the U.S. lost its monopoly on nuclear weapons. Basically, her dragon-armed opponents are zombies—they're already dead—and their objective is essentially to kill everyone. In this case the comparison is favorable to us, in the real world. We can reasonably rely on the capacity of those who have nuclear weapons to understand that there is something fundamentally different about them.

Truman reportedly was unconcerned with the human toll of the conventional bombing campaigns, but the horror of Hiroshima and Nagasaki rattled him. He was determined never to use them again, and in 1950 when war broke out in Korea, he declined to use his atomic bombs and opted to fight a limited, proportionate campaign rather than risk a full conflict with the Soviet Union. Ever since, the U.S. has refrained from using its full military might in its wars. Of course, the U.S. also has won few decisive victories and even lost a war. There is a correlation.

Nuclear weapons force us to accept foreign policy outcomes that are far from desirable. One might argue for doing whatever it takes to prevent other nations from acquiring nuclear weapons, but once they have them, nothing much can be done. The argument for melting a nuclear power's castles and burning its cities becomes as much a fantasy as Game of Thrones.

This commentary originally appeared on Scientific American on August 24, 2017. Commentary gives RAND researchers a platform to convey insights based on their professional expertise and often on their peer-reviewed research and analysis.