When the Car Is a Terror Weapon, Can We Prepare for Attacks? 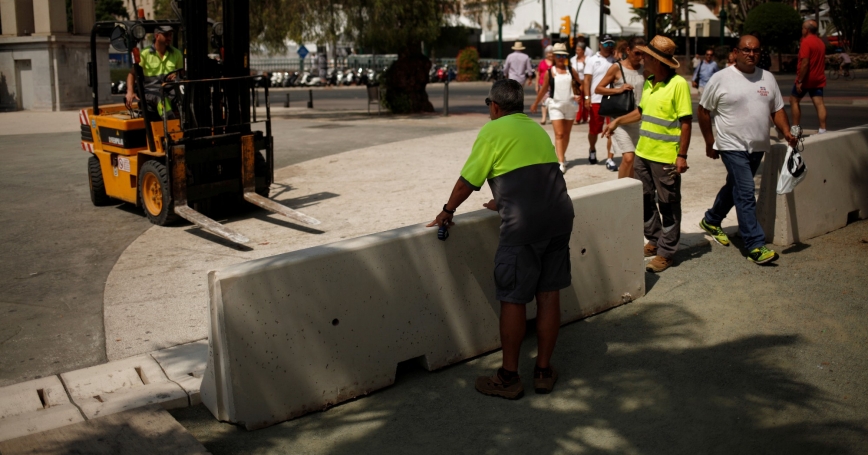 Workers place concrete barriers to prevent possible attacks on the walk Muelle Uno in Malaga, Spain, a day after a van crashed into pedestrians at Las Ramblas

Thursday's horrific vehicle attack in Barcelona, Spain, a country once labelled “the forgotten front” in Europe's Islamic State war, should not come as a complete surprise. Spain has long been featured in jihadist propaganda, which refers to the country as “Al-Andalus,” the historic Muslim territory that once included parts of Spain and Portugal.

Barcelona became the latest European city to suffer an attack at the hands of a terrorist seemingly inspired by the Islamic State in Iraq and Syria, which claimed responsibility mere hours after the incident.

The attack occurred when a large van barrelled through Las Ramblas, an area popular with tourists in the centre of the city. So far, the toll stands at 14 people killed, with another 130 injured, although numbers are expected to rise in the coming days. The van attack in Barcelona was just one part of the terror plot, as a house explosion in Alcanar on Wednesday evening and a car attack in Cambrils on Friday morning, where seven people were run over, resulting in one fatality. Five suspected terrorists involved in the Cambrils attack were shot dead by police.

At least 100 Spanish citizens are thought to be fighting with terror groups in the Middle East.

According to a 2016 report, at least 100 Spanish citizens (PDF) are thought to be fighting with terror groups in the Middle East. Spain has also been used as a hub for material support for terrorism. In early 2015, it was discovered that at least 250 phone call-centres, butcher shops and neighbourhood grocery stores had been used to transfer money to terrorists fighting in Iraq and Syria.

The increasing use of vehicles to conduct terrorist attacks is a policymaker's nightmare. These kinds of attacks are nearly impossible to prevent, and almost anyone with access to a truck or car can drive to a crowded area and target civilians.

This was the most devastating terrorist attack to hit Spain since the Madrid train bombings in 2004, when al-Qaeda-linked terrorists bombed Spanish commuter trains, killing 191 people and injuring more than 2,000. Just last week, al-Qaeda in the Arabian Peninsula published a feature story in its propaganda magazine, Inspire, that calls upon supporters to strike trains in the United States and Europe.

Spain is known to have well-trained and robustly resourced counter-terrorism forces. Prior to the Madrid attacks, Spain had endured a decades-long terrorist campaign waged by the Euskadi Ta Askatasuna (ETA), or Basque Homeland and Liberty, a secessionist group fighting for an independent homeland for the Basque peoples. While ETA sometimes targeted civilians and journalists, it mostly focused on attacking symbols of the Spanish state — politicians and members of Spain's security services, and infrastructure, including Madrid's Picasso Tower skyscraper. Over the past several years, IS-linked attacks in Europe have primarily targeted civilians, although not exclusively.

Thursday's attack in Barcelona was in keeping with a recent trend of terrorists using vehicles to attack by plowing into a crowd. Similar attacks have occurred in several other European cities since 2016, including Nice, Berlin, Stockholm and London. These type of terrorist attacks are relatively simple to carry out and opportunistic, since attackers can plan the attacks in advance and wait for a particularly crowded day to strike. The proliferation of vehicle attacks could represent an overall change in terrorist tactics away from the use of suicide bombs, which are harder to construct and do not always result in the high casualty counts terrorist groups seek.

As the Islamic State continues to lose territory, many terrorism experts believe the group will attempt to continue striking the West.

As the Islamic State continues to lose territory in Iraq and Syria, many terrorism experts, myself included, believe the group will attempt to continue striking the West. IS prefers spectacular attacks similar to Paris in November 2015, but the group will settle for smaller one-off attacks from individuals who are inspired by IS, that serve to terrify Western civilians.

Soft targets, so-called because they are more vulnerable to terrorism due to lower levels of security, are notoriously difficult to protect, and the latest shift to using vehicles to conduct ramming attacks only compounds the problem for authorities. It is entirely possible to restrict the sale of firearms or precursor chemicals used to make explosives, but banning vehicles from numerous parts of a city would fundamentally alter its social fabric and pose new challenges for transportation officials and urban planners.

Yet even when local and national authorities move to prevent open areas from becoming targets in pedestrian-friendly cities by erecting barriers and stanchions, they serve as an all-too-visible reminder of this: Even if terrorists can be successfully prevented from going on a murderous vehicular rampage, the terrorists will believe they have already won by forcing Westerners to change their way of life.

This commentary originally appeared on The Globe and Mail on August 18, 2017. Commentary gives RAND researchers a platform to convey insights based on their professional expertise and often on their peer-reviewed research and analysis.