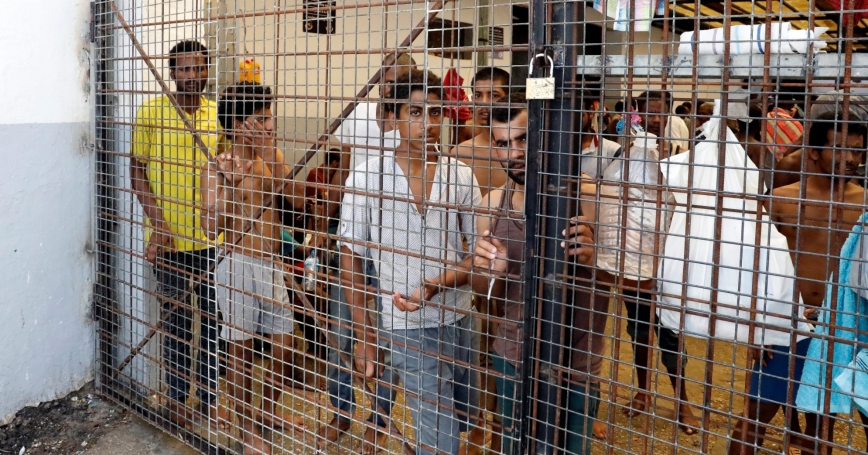 Migrants at the Anti-Illegal Immigration Authority in Tripoli, Libya, September 10, 2017

by Amanda Kadlec and Shelly Culbertson

Some 600,000 migrants have crossed from Libya to Italy on flimsy boats on the Mediterranean since 2014, with 94,000 arriving in the first half of this year alone. But the numbers dropped precipitously this summer. Much of this change has been attributed to European governments' tactics to prevent migrant boats leaving Libya — both by helping Libya's weak UN-backed government to improve its border patrolling and by brokering deals with governments and others, including human trafficking militias, to keep migrants in place. While this strategy of treating migration from Libya as a border security problem has led to the reduction in migration across the Mediterranean in the near term, current efforts to keep migrants in Libya are fraught with risks, exacerbate a massive human rights problem, and may not address the problems in the long run. Instead, seeking ways to improve stability and governance in Libya, through diplomatic and economic means, could help make the summer's decline in migration an enduring trend.

Since 2011, some 4.3 million refugees and economic migrants crossed into Europe through multiple land and sea routes. European nations have struggled to strike a balance between protection of lives, providing humanitarian relief on one hand, and ensuring European security and economic interests, on the other. The two busiest routes were from Turkey to Greece and from Libya to Italy. The 2016 EU-Turkey deal, which provided $7 billion in European aid to Turkey in exchange for Turkey keeping refugees inside its borders and taking back those who had crossed irregularly, closed off most of the first route. Libya has remained the most active, though dangerous, entryway to Europe via the Mediterranean Sea — and a focal point of human trafficking.

Addressing this mainly as a border control issue rather than holistically investing in Libya's economic and political stabilization has risks and costs.

European efforts to keep people in Libya are simply containing a grave humanitarian crisis — not solving it.

First, European efforts to keep people in Libya are simply containing a grave humanitarian crisis — not solving it. Human trafficking is lucrative and extensive in Libya. There are an estimated 700,000 to 1 million migrants trapped in Libya. Traffickers taking people from sub-Saharan Africa and elsewhere have used Libya as a launchpad to Europe, because no single, manageable security entity exercises control over its vast desert territory, borders, and shores. The United Nations has documented widespread abuses of migrants in Libya, including arbitrary detention, inhumane detention conditions, forced labor, torture, extortion, and sexual violence. Forcing these large numbers of people to endure such conditions without an onward solution could lead to further radicalization and destabilization along Europe's Mediterranean border. Furthermore, if localized militias are incentivized through financial benefits or other carrots to keep migrants from leaving Libya, treatment of them could get worse, not better. European nations risk complicity in this, if they are backing the very government that is affiliated with militias and tribes that have driven the human trafficking industry.

Second, Europe's uncoordinated actions could worsen the instability in Libya. The 2014 post-Gaddafi civil conflict created competing governments, each backed by an array of international entities. The UN-backed government in Tripoli is working closely with the Italians, while the eastern government in Tobruk, which is nominally supported by Russia, considers the partnership a violation of national sovereignty. Some funding provided by Italy is being funneled via the UN-backed Libyan government to the Libyan militias in charge of migrant detention centers. This further empowers the militias and undermines prospects for stability and rule of law under a single government. Amid this chaos, the Islamic State has resurged, despite European governments' attempts to mitigate it by trying to form a unified Libyan state to fight it. Meanwhile, efforts to press Libyan power brokers to stop the human suffering and torture in migrant detention camps have yielded little success.

Third, the EU is committing $55 million to help the Libyan government halt traffic from its shores and may consider a total of $7 billion aid package — the same amount offered to Turkey last year to cut off the Balkan route. An agreement similar to the one with Turkey poses risks because there is no single government to work with — rival forces share Libya's stretch of coastline and the desert areas. Large sums of aid money also could create conditions for corruption, unless funding is carefully monitored and accompanied by assistance in brokering political reconciliation and rule of law.

Finally, simply strengthening borders fails to address the causes of migration — the civil conflicts, famines, and poverty that drive people from their homes in sub-Saharan Africa and elsewhere and onward to Europe. The militias may keep the human smuggling business and other illicit trade throughout North Africa via alternate routes and means.

Europeans are eager to find immediate solutions. Immediate steps in Libya to keep the influx of migrants have reduced the number of migrants taking boats across the Mediterranean. In the long run, an approach that treats irregular migration primarily as a border control issue with Libya will not be likely in the best interests of either European security or humanitarian values.

Amanda Kadlec is a policy analyst at the nonprofit, nonpartisan RAND Corporation. She conducted fieldwork in Libya and authored the Libya chapter in The Middle East (2013). Shelly Culbertson is a senior policy researcher at RAND. She is the author of The Fires of Spring: A Post-Arab Spring Journey Through the Turbulent New Middle East (2016).

This commentary originally appeared on Foreign Policy Concepts on September 23, 2017. Commentary gives RAND researchers a platform to convey insights based on their professional expertise and often on their peer-reviewed research and analysis.