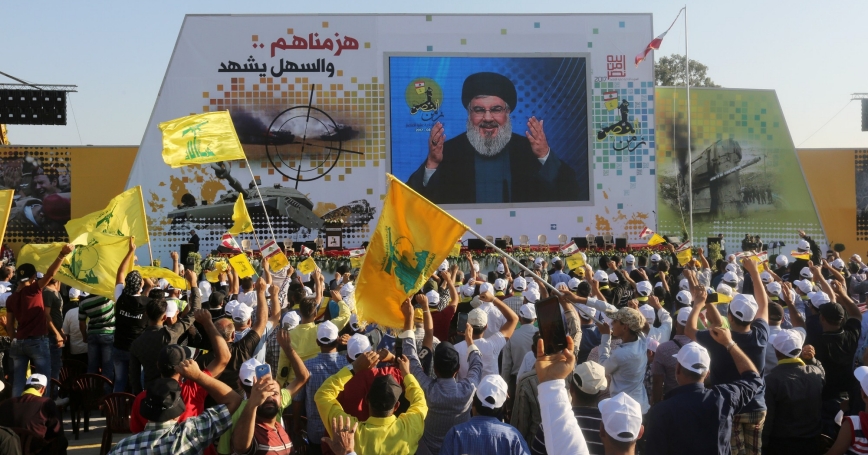 Supporters of Lebanon's Hezbollah leader Sayyed Hassan Nasrallah listen to him via a screen during a rally marking the 11th anniversary of the end of Hezbollah's 2006 war with Israel, in Khiam, Lebanon, August 13, 2017

The Islamic State in Iraq and Syria's relentless use of social media has caused it to be widely regarded as the most innovative of the modern terrorist groups. But long before ISIS began significantly investing in propaganda, the Lebanese Shi'ite terrorist group Hezbollah had laid the groundwork for the effective use of information warfare, which is the ability to gain an advantage over an adversary through the management of information.

Hezbollah operations have long been governed by the mantra, “If you haven't captured it on film you haven't fought.” The group grasped the importance of documenting its successes as early as 1994 when Hezbollah fighters and a cameraman infiltrated an Israeli military compound in Lebanon and raised a flag inside the base, captured the event on film — and scored a major propaganda coup.

Accordingly, many of Hezbollah's activities are directly connected to its recruitment efforts and the quest to maintain political legitimacy while still pursuing a militant agenda.

Hezbollah propaganda is well-honed, targeted and specific, and it emphasizes specific themes that include resistance ideology, martyrdom and establishing legitimacy through the provision of social services. Early on, its leadership understood the group would need support beyond its immediate Shi'ite constituency. So Hezbollah has geared its information efforts to be seen as an inclusive organization, attempting to garner support throughout Lebanon among Christians and Sunnis as well as throughout the broader Arab and Islamic world.

The history of Hezbollah's information warfare efforts is perhaps best told through the story of the evolution of its active media arm, Al-Manar, a satellite television station that broadcasts from Beirut and can be seen around the world. After the first broadcast of Al-Manar (“The Beacon”) in 1991, Hezbollah began regularly scheduled broadcasts three years later and serves a critical role as the main dissemination point for Hezbollah news and propaganda. Hezbollah's extensive media operation also includes radio stations, print publications and a network of over 50 websites that operate in multiple languages.

Al-Manar began trying to influence Israeli public opinion by broadcasting actual battlefield footage showing Israeli soldiers being killed and maimed. Hezbollah combat units use violence as a psychological tool in an attempt to bring down the morale of the IDF as well as the Israeli public. The effort included creating a “Hebrew Observation Department” to monitor Israeli radio and television broadcasts around the clock. The popularity of Al-Manar has helped it grow into one of the Arab's world's leading news organizations.

Al-Manar has an annual budget of roughly $15 million, much of it supplied by wealthy expatriate Lebanese donors and various Iranian community organizations, and income from the sale of its shows.

Equally as impressive as Hezbollah's TV and video production is its use of new media and information technologies, including a major internet presence.

Equally as impressive as Hezbollah's television and video production is its extensive use of new media and information technologies, including a major internet presence. Hezbollah leader Hassan Nasrallah has his own personal website, complete with archives of his speeches and a photo gallery of military operations.

Minutes after missiles hit the Israeli naval destroyer Hanit during a 2006 conflict, Nasrallah used Al-Manar to take credit for the strike and provided accompanying footage for distribution by regional media and YouTube.

To promote its propaganda and messages, Hezbollah uses an array of tactics that include postcards, posters, videos, keychains, billboards, video games and elaborately constructed websites. Hezbollah's websites reflect the group's diverse agenda and aim to be multi-generational in their approach, appealing to the young and old, while offering information about social services as well as personal information on Hezbollah military figures.

In an attempt to better engage the younger generation, Hezbollah developed an online video game application in 2010 in which players wage a war against Hezbollah's enemies, mainly the Israelis. Before the game begins, a player takes rounds of target practice against a lineup of well-known Israeli politicians. The game has been popular among young Lebanese Shi'ites and credited as a success in recruiting new members to the cause.

As Iran continues to develop its cyber capabilities, Hezbollah is widely expected to be a major beneficiary. Hezbollah is constantly working to refine its technical capabilities, as evidenced by a move toward faster fiber-optic networks that can enhance the group's data-streaming capacity and provide a more stout defense against Israeli electronic warfare capabilities. Hezbollah not only prevented Israeli units from jamming its networks south of the Litani River in the July 2006 war, it reportedly had equipment in place to jam Israeli radar and communications systems.

For operational security reasons, Hezbollah migrated to closed telephone circuits that operate independent of Lebanese government networks. During fighting in the Syrian town of Qusair in 2013, Hezbollah again showed its penchant for operations security by devising a complex system that allowed its fighters to talk freely on open radio communications without having to be too concerned about conversations being intercepted.

While the Islamic State may continue to get the lion's share of attention for its use of social media and propaganda, Hezbollah's information warfare capabilities continue to be overshadowed and perhaps taken for granted.

Hezbollah has been a fact of life since the early 1980s and, given the group's remarkable ability to operate in the information environment, will likely remain the most dominant and capable terrorist group in the Middle East for decades to come.

This commentary originally appeared on The Jerusalem Post on September 17, 2017. Commentary gives RAND researchers a platform to convey insights based on their professional expertise and often on their peer-reviewed research and analysis.