A Glass Half Empty? Taking Stock of Hezbollah's Losses in Syria 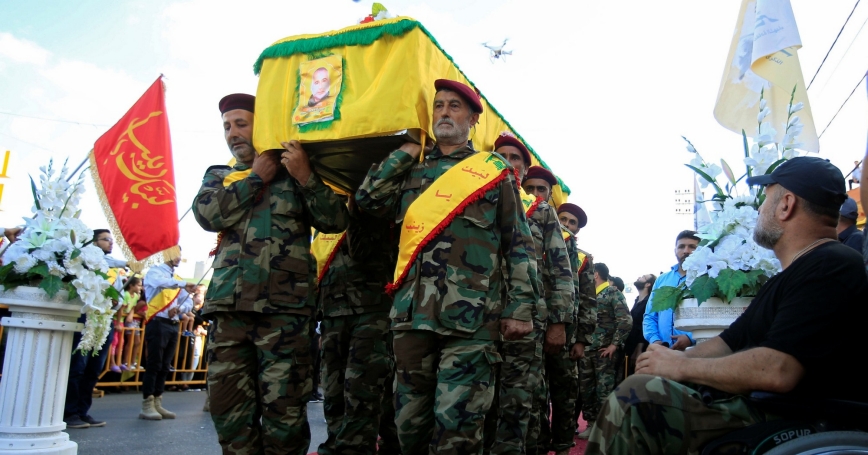 Many scholars studying the civil war in Syria have declared Hezbollah, the Lebanese Shi'ite militant group sponsored by Iran, one of the few “winners” in the conflict. But for all the praise enjoyed by the “Party of God,” much of the analysis has failed to highlight how participating in the war has hurt Hezbollah.

In many ways, Hezbollah has overextended its organization, its brand and reputation have been sullied and it has ceded the autonomy it is so notorious for protecting.

As a result of its role in the Syrian civil war, Hezbollah faces real-world blowback—serious negative consequences.

Hezbollah militants have been involved in some of the most serious skirmishes in the nearly six-year conflict in Syria, including the May 2015 battles in the Qalamoun region near the border with Lebanon. The fighting has been taxing on Hezbollah as an organization, which has been asked to do some heavy lifting to make up for shortcomings of the inferior military forces of Syria's Assad regime.

The body count is high. Hezbollah has lost between 1,700 and 1,800 fighters, including many seasoned veterans. In comparison, Hezbollah lost 1,200 fighters during its 18-year conflict with Israel between the years 1982 and 2000.

To replenish its ranks, the group has been forced to recruit younger and less qualified fighters, making Hezbollah seem desperate.

In addition to facing significant manpower issues, the organization's image has suffered drastically. Long known as a vanguard of the downtrodden, Hezbollah touts itself as a force to defend the oppressed. But in Syria, it sends its fighters to the front lines to defend an odious regime that has repeatedly used chemical weapons against its own civilian population.

Placing itself in the midst of an intensely sectarian conflict, it has also squandered the political capital it once enjoyed across the Arab world since 2006, following its 33-day war with Israel. The group has been criticized for its seeming hypocrisy. It vocally supported Arab Spring uprisings across the Middle East and North Africa, yet still provides unflinching support for the vile dictatorship in Syria.

Back home in Lebanon, its supporters are increasingly questioning the unending procession of coffins coming back to Beirut, as Hezbollah fights to defend an ally in another country. The group even recently brokered a deal to help fleeing Islamic State (ISIS) fighters withdraw from an area near the Lebanon-Syria border that had come under siege.

Yet another byproduct of Hezbollah's role in Syria has been a loss of autonomy. Hezbollah has always been correctly depicted as a proxy of Iran, but this characterization has reached new levels, with the group being labeled a stooge of the Assad regime and a puppet of the mullahs in Tehran.

Moreover, since Hezbollah's raison d'etre has always been to fight Israel, not other Arabs (even if they are Sunnis), Syria has distracted Hezbollah from what is allegedly its top priority. Its dependence on Iran has deepened during the course of the Syria conflict, but if and when the war comes to an end, it remains unclear what, if anything, Hezbollah might gain. Any political settlement will likely be hashed out among the array of powerful nation-states involved—Russia, the United States, Turkey, Iran and Saudi Arabia—with few tangible benefits available to the array of militant groups currently active in Syria.

Another complication regarding Hezbollah's role in Syria is the real-world blowback the group has already experienced and may continue to reap in the near future. Shi'ites in Lebanon have been attacked several times by suicide bombers dispatched from Syria. In July 2013, a car bombing in the Bir al-Abed suburb of Beirut and another attack nearby the following month in the Ruwais neighborhood killed dozens and wounded scores more.

Hezbollah's relationships with regional power brokers, especially Saudi Arabia, have also suffered. In many ways, Hezbollah has been caught up in the whirlwind of the widening rift and growing proxy conflict between Iran and Saudi Arabia. Hezbollah has also voiced its displeasure with the treatment of Houthis, predominantly Shi'ite rebels fighting in Yemen, and Shi'ites in both Bahrain and Saudi Arabia's eastern provinces.

The domestic backlash has been palpable as well. Hezbollah has no shortage of critics in Lebanon, especially among the Sunni population, which accuses Hezbollah of risking Lebanon's security and economy to serve the needs of its patrons in Tehran and Damascus.

Hezbollah's “all in” approach to Syria comes with plenty of baggage.

While Hezbollah has benefited in some ways from fighting in Syria, including gaining valuable combat experience fighting alongside Russian and Iranian forces, its “all in” approach to Syria comes with plenty of baggage. This may be especially true if Assad is ousted from power, a scenario that may be unlikely but would deal the Party of God a devastating blow that could take it years to recover from.

On balance, the end result of the conflict in Syria may be a war-weary and weakened Hezbollah that needs to reform its image throughout the Arab and Islamic world, while working to increase military readiness in an ever-dangerous neighborhood.

Hezbollah has gained valuable combat experience in Syria, but the cost of that experience may not outweigh the losses in troops, the damage to its image and the need to cede some of its autonomy to Iran and the Assad regime.

The longer the war drags on, the more apparent these losses will become.

Colin Clarke is a political scientist at the nonprofit, nonpartisan RAND Corporation and an associate fellow at the International Centre for Counter Terrorism-The Hague.

This commentary originally appeared on The Jerusalem Post on October 15, 2017. Commentary gives RAND researchers a platform to convey insights based on their professional expertise and often on their peer-reviewed research and analysis.