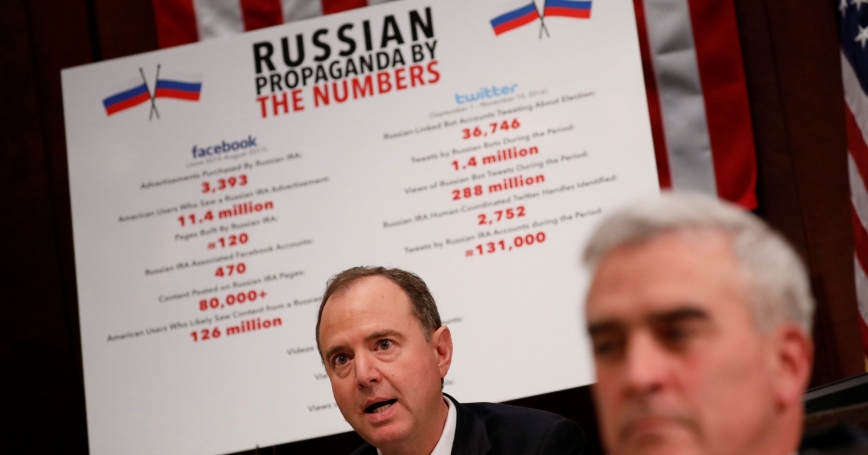 Google is the most recent company known to have discovered evidence of Russian covert influence on its books. As more media companies realize Russia bought advertising space or promoted news stories—fake and otherwise—on their platforms, covert influence has become the new money laundering.

Both activities hide below the surface of legitimate enterprises, cast a shadow of disrepute on those very enterprises, and can be neutralized through transparency and accountability.

Anti-money laundering laws provide useful lessons for combating covert influence and could be adapted for online media models that do not require users to be paid customers.

In the 20th century, the rise of organized criminal enterprises, like the Mafia and drug-smuggling cartels, led law enforcement officers and prosecutors to realize that investigating each murder, each coercion of a legitimate business, and each drug shipment was an untenable and unsustainable investigative approach. Meanwhile, tax evasion was difficult to track and combat without documentation that held citizens accountable for their financial assets and earnings.

Government officials could not succeed against highly organized and sophisticated criminal activities simply by investigating and prosecuting each individual offense. They needed to track the flow of money and create audit trails for the lifeblood that enabled these organizations and individuals to prosper.

For these reasons, anti-money laundering laws were created. In 1970, the Bank Secrecy Act required proper record-keeping, which officially made it illegal to conduct transactions “off the books.” In 1986, money laundering was designated a federal crime. And more recently, know-your-customer (or KYC) rules have required all financial institutions to verify the identity of their clients. These laws originated in the U.S., and have now been adopted in nearly 80 countries that want to disrupt illegal activities (PDF) and do business with U.S. financial institutions.

Anti-money laundering laws have been successful in preventing criminals and terrorists from paying for goods and services with ease in the financial markets. Under these laws, nefarious actors have been relegated to using cash—which is significantly more cumbersome to transfer—or they risk leaving financial paper trails that can be presented to courtroom juries.

The leak of more than 11 million financial and legal records in 2016, referred to as the Panama Papers, demonstrated the lengths people had gone to circumvent these laws and the power of transparency in holding wrongdoers responsible. The resulting paper trail has led to investigations in at least 79 countries.

The way to combat covert influence may be to shine a light on the source of messages in the media.

Policymakers have begun exploring potential legislative options. For example, new legislation proposed in Congress would require online platforms with more than 50 million users to report who their advertisers are and reveal the targets of messaging campaigns. These requirements for online media are similar to existing regulations for TV and radio advertising.

The evidence shows Russia bought ad space and also promoted certain fake, real, and questionable news stories on Facebook, Twitter, and now Google. The specific stories and ads Russia promoted were associated with widening divisions within the American populace along racial divides, religious differences, and political topics before and after the 2016 presidential election. Michael Morell, former acting director of the CIA said earlier this year, “Putin wants to weaken the United States. Creating political turmoil here does that—it means we are not able to focus as we should on the important economic and national security issues facing the country, to include Russia's malign behavior in the world.”

In online domains, users need not become paid advertisers to amplify messages; fake accounts and bots can do it without ad buys.

Social media benefits society by giving a voice and microphone to those who might otherwise be voiceless, but this same benefit becomes a liability in the hands of a sophisticated adversary with a deep budget for paying English-speaking trolls to pose as Americans.

Twitter offers a path to address this challenge through the small blue checkmark that appears next to a profile of a user whose name and identity has been verified. All platforms could provide the option of being “verified” or not. Some users can choose to remain anonymous, and others can choose verification.

This approach provides a framework for creating transparency, accountability, and an audit trail by allowing users—and congressional investigators—to see whether news is being promoted by verified or unverified users.

Content could continue to be both political and anonymous. By applying a hybrid approach to know-your-customer rules, being a “known” customer would be voluntary—unlike in banking where it is mandatory—and Congress could design rules that allow non-paying users to either identify themselves or not, require advertisers to be identified, and require record-keeping by media companies for future investigations.

Americans shouldn't have to choose between protecting the democratic process from foreign influence and protecting First Amendment rights.

Under current financial laws, financial entities are required to report suspicious activity to the government. Similarly, rules could be written in such a way to require to be reported suspicious online activity by foreign entities or unverified accounts. In the financial sector, these suspicious activity reports have not prevented Americans from donating money anonymously to political causes, political candidates, and religious groups. Americans' First Amendment protections for these activities remain intact, despite the existence of both know-your-customer rules and financial reporting requirements.

Today, Congress and the courts have the ability to subpoena records from the media, but companies have not been required to know their customers or collect these types of data and therefore might not have adequate records to provide.

In the struggle between protecting the democratic process from covert foreign influence versus protecting First Amendment rights, Americans should not be forced to choose. A thoughtful solution could reveal the true origin of covert foreign messaging using lessons from a financial sector that has led the world in both transparency and accountability.

Cortney Weinbaum is a national security researcher with the Cyber and Intelligence Policy Center at the nonprofit, nonpartisan RAND Corporation and a former intelligence officer in the U.S. intelligence community.

This commentary originally appeared on TechCrunch on November 5, 2017. Commentary gives RAND researchers a platform to convey insights based on their professional expertise and often on their peer-reviewed research and analysis.