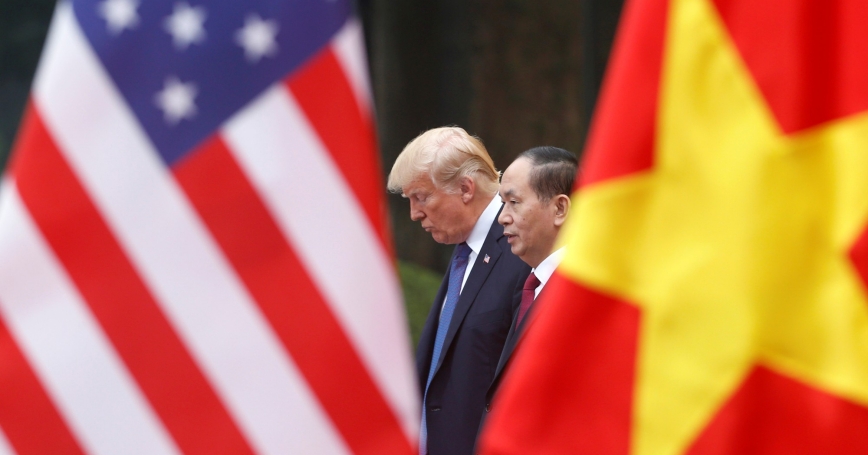 As the dust finally settles on President Donald Trump's first Asia visit, observers have begun to criticize the administration for not accomplishing much during the whirlwind five-country 12-day trip. These critics, however, should look more closely at Trump's time in Vietnam, where something quite significant indeed occurred: The administration seized upon the positive momentum left over from the Obama administration to elevate U.S.-Vietnam defense cooperation to new and unprecedented heights. This development will be vital to both Vietnamese and U.S. strategic interests in the South China Sea for the foreseeable future.

Trump's visit followed up on Vietnamese Prime Minister Nguyen Xuan Phuc's May 31 discussion with the president at the White House. This meeting produced a joint statement recognizing the need to ensure freedom of navigation, peaceful settlement of disputed territorial claims in accordance with international law, and the development of a legally-binding Code of Conduct in the South China Sea — all implicit signals of opposition to China's growing military presence and assertiveness in the region.

In Hanoi on November 11, Trump met with his counterpart President Tran Dai Quang, and the two not only reiterated this language, but went further to announce the initiation of a three-year memorandum of understanding to implement key components of prior bilateral defense agreements. While it is unclear precisely what this might entail, the announcement clearly suggests a deepening of ties. Some of the areas of ongoing support to Vietnam include enhancing the military's maritime domain awareness capabilities, as well as modernizing its fleet of coast guard patrol boats. Indeed, just before Trump met with Phuc in May, the administration transferred a Hamilton-class coast guard vessel to Vietnam to improve its maritime law enforcement capabilities.

The administration seized on positive momentum from the Obama era to elevate U.S.-Vietnam defense cooperation.

As part of Washington's deepening defense partnership with Hanoi, Trump and Quang also reaffirmed the plan to send a U.S. aircraft carrier to Cam Ranh Bay in 2018. This idea was first floated during the Trump-Phuc meeting, and then was firmed up when Vietnamese Minister of Defence Ngo Xuan Lich visited the Pentagon in August. In their joint statement in November, Trump and Quang reaffirmed that this carrier visit would happen next year and added a mutual desire that Secretary of Defense James Mattis should seek to make an “early visit” to Vietnam. But Trump did not leave it at that. Before meeting with Phuc, and perhaps wandering off script, Trump offered to sell Vietnam missiles, stating that U.S. “missiles are in a category that nobody even comes close.” Separately, he offered to “mediate or arbitrate” the South China Sea dispute before meeting with Quang.

Finally, while attending the Asia-Pacific Economic Cooperation conference in Da Nang the day before, on November 10, Trump referred to the region multiple times as the “Indo-Pacific.” Even though this term was originally coined in 2007 to describe the growing interconnectivity between the Indian Ocean and Asia-Pacific regions, it has since evolved to imply to many observers an effort by the United States to leverage its superior naval capabilities to contain China in both regions. Indeed, Trump played into this conception of the Indo-Pacific by reviving quadrilateral talks — comprised of the United States, Australia, Japan, and India — during his Asia visit.

All of these decisions, even the more questionable ones, such as offering to sell missiles to Vietnam or mediate disputes in the South China Sea, are healthy for deepening bilateral defense ties in the pursuit of national strategic interests.

For Vietnam, Rodrigo Duterte becoming president of the Philippines was an enormous blow to its position in the South China Sea. Duterte abruptly decided to shelve Manila's July 2016 victory in the Permanent Court of Arbitration to dispute China's expansive territorial claims in the region, in effect leaving Hanoi holding the bag on the issue. Vietnam's attempts to take the lead on hashing out a legally binding Code of Conduct with China and other claimants have proven futile. Thus, support from Washington in the form of the joint statements is helpful at this time. Beyond rhetorical support for its position, Hanoi is also clearly content with displays of U.S. military power to deter China from further aggression in the South China Sea. It is unprecedented that Vietnam has agreed to Washington sending an aircraft carrier to the sensitive military facility of Cam Ranh Bay, which is closest to the disputed Spratley Islands.

Hanoi is clearly content with displays of U.S. military power to deter Beijing from aggression in the South China Sea.

Moreover, Trump's apparently burgeoning relationship with Chinese President Xi Jinping reassures Vietnam that it is unlikely to become a pawn in major power geostrategic calculations. Given Hanoi's long and unfortunate history of warfare against external powers, including both the United States and China, as well as pressure to choose between socialist powers and the United States during the Cold War, Vietnam is particularly wary of a repeat scenario. Vietnam instead prefers stable U.S.-China ties to preserve its non-aligned yet “multidirectional” cooperative approach. Simultaneously, however, Hanoi appreciates a sustained U.S. presence aimed at balancing China. By raising the possibility of mediating disputes in the South China Sea, Trump opened the possibility that the United States might continue to play an engaged and active role in the region. This runs contrary to the impression Trump gave earlier when he terminated Obama-era policies such as the Trans-Pacific Partnership and strategic rebalance or “pivot” to Asia, both of which sought to maintain Washington's presence and leadership. Indeed, Trump's Indo-Pacific concept seems like a simple replacement of the pivot-to-Asia strategy.

Trump's deepening defense engagement with Vietnam is a positive development for the United States as well. Washington has an acute interest in freedom of the seas to safeguard the global economy. Chinese domination of the South China Sea runs contrary to that objective, and support to Vietnam will complicate Beijing's ability to bully its way to victory. Apart from the South China Sea, working more closely with Vietnam recognizes its important contributions to regional security in the areas of humanitarian assistance and disaster relief, search and rescue, and peace-keeping operations. Only within the last 25 years has Hanoi decided to engage the regional community and become a leader within Southeast Asia on non-traditional military operations. Washington encourages this positive behavior through its engagement.

Although these accomplishments are laudable, there are, of course, reasonable limitations to U.S.-Vietnam defense cooperation. Many senior Vietnamese generals who served in the military against American forces remain in power. Therefore, deep distrust of U.S. intentions is still prevalent in the country. In other words, Vietnam would probably not feel comfortable conducting joint training with U.S. forces or developing war plans in tandem. Additionally, with only perhaps $5 billion to spend on defense per year, it will be difficult for Vietnam to procure most weapon systems from Washington. This explains, to a large extent, Hanoi's inactivity in purchasing U.S. equipment since Obama lifted the decades-long ban on the sale of offensive weapons to Vietnam in May 2016. Another important component, however, is Vietnam's preference to avoid provocative moves that might unnecessarily antagonize China. That is why Vietnamese leaders declined to comment on Trump's offer to sell missiles to Vietnam. Even still, Hanoi probably appreciates the offer privately, but seeks to maintain the delicate balancing act of positioning itself to defend its claims in the South China Sea, while not getting caught up in great power rivalry. If the United States keeps this in mind as well, then defense relations will continue to soar.

Derek Grossman is a senior defense analyst at the nonprofit, nonpartisan RAND Corporation. He formerly served as the daily intelligence briefer to the Assistant Secretary of Defense for Asian and Pacific Security Affairs at the Pentagon. The opinions expressed in this article are his own.

This commentary originally appeared on The Diplomat on November 22, 2017. Commentary gives RAND researchers a platform to convey insights based on their professional expertise and often on their peer-reviewed research and analysis.