What Is the Sahel G5 Force and Why Should the U.S. Support It? 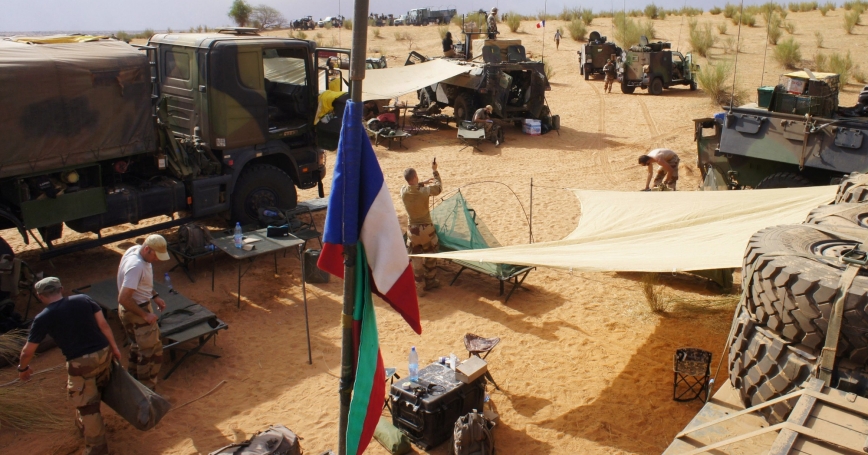 French soldiers set up camp while waiting for the delivery of a replacement piece for a vehicle in Inat, Mali, May 27, 2016

U.S. Secretary of State Rex Tillerson's announcement last week that the U.S. would contribute $60 million to France's “Joint Force G-5 Sahel” (or FC-G5S, to use the French acronym) project is welcome news. Supporting the French initiative is a worthy undertaking, provided, of course, that everyone understands what it is and is not.

The idea for the FC-G5S ostensibly came from the G-5 Sahel members—Burkina Faso, Chad, Mali, Mauritania and Niger—who see it as a way to bolster security in the region and in Mali in particular. All five nations, among the world's poorest, have tiny security forces that can only accomplish so much given their limited resources.

Fighting terrorist groups alongside them is a French military force, known as Operation Barkhane, with roughly 4,000 troops and a handful of combat and transport aircraft, the same force that rescued ambushed U.S. Special Forces soldiers earlier last month.

Though capable, the French force is woefully undersized given the geographic expanse of the Sahel, which is as wide as the continental U.S. In Mali, there is also a large U.N. force, MINUSMA, which like Barkhane is too small. It is also hindered by a weak mandate that limits its activities and prevents it from acting offensively.

The FC-F5S, to be clear, is not a new force to be stood up alongside the G-5s existing militaries. Rather, the idea is to make the whole of their military capacity greater than the sum of the parts by establishing a joint command structure that, with French help, will coordinate the different militaries' actions and enable them to support one another and operate in one another's territory.

Already, they have established a central command center in Sévaré, Mali, and are working toward establishing a joint command center in each of the three zones. The next step will be to organize roughly a brigade-sized element—sometimes described as a quick reaction force—intended to operate in Mali.

The Trump administration, keen on cutting U.S. financial support to U.N.-backed programs, has balked at the estimated price tag of roughly $500 million as well as voiced concern over the force's mandate.

Whereas Barkhane's mandate authorizes it to engage only designated terrorist groups, the FC-G5S will have a broader mandate that includes groups involved in “trafficking,” a category that includes a wide array of local groups and greatly raises the risk of getting entangled in local disputes and perhaps taking sides. It is akin to entering a minefield.

Finally, as several Sahel experts have noted, any plan that focuses on security is no substitute for a comprehensive and coherent strategy for the Sahel, which must pay at least as much attention to addressing political matters and fostering development.

This criticism is absolutely correct, and in a nutshell, it describes all that's wrong with U.S. and French efforts in the Sahel, which focus on military matters and pay considerably less attention to anything else.

It is a major reason why the security situation in the Sahel has degraded considerably in the past decade, notwithstanding everything both nations have been doing to stop it.

Nonetheless, in the spirit of not letting the perfect be the enemy of the good, the French plan has certain advantages even if one agrees that a security-focused effort can never, on its own, achieve the larger U.S. and French policy goals of generating security and stability in the Sahel.

First, given the apparent lack of significant return on investment for past and present U.S. security assistance programs in the region, it stands to reason that something different either alongside or in lieu of current efforts might yield better results.

Second, the plan places African security forces squarely at the center, with the ambition of making them more effective, rather than calling for a greater French or American footprint. The advantages of host nation militaries doing the job are self-evident.

Third, the plan extends the reach of the French military, which will provide some of the organizational structure for the force and support it with a number of capabilities. It is simply a more efficient way for the French to assist the G-5 militaries than by interacting with each on a bilateral basis.

The French military happens to be particularly good at this kind of close work with African militaries. As for the problem of straying into local conflicts, that risk is real, but at least the French are well informed about those conflicts and can weigh the pros and cons of a specific course of action.

There is no guarantee that the French will be able to steer Sahelian forces through any figurative minefields, and do so correctly. French claims to impartiality are already worn thin, at least in the eyes of many. However, to be blunt, better the French than the U.S. military, at least in this part of the world.

Lastly, the ever-worsening situation in Mali makes clear that the country needs more help than its military, Barkhane and MINUSMA currently can provide. Part of the problem is the weakness of the Malian Armed Forces, (FAMA), which lack both the will and the ability to operate effectively and forcefully in northern Mali.

Fixing FAMA is a difficult proposition. The French are convinced that FAMA could and would do more and better if their partners operated alongside them. It is, they say, a condition the Malians require. The French cannot be that partner, at least not all the time, because they are too few.

MINUSMA cannot, either, for a variety of reasons. What the FC-G5S does is project into Mali an international force that is neither Barkhane nor MINUSMA, and can operate with few hindrances and with French military support.

The French plan offers the possibility of strengthening the Sahel nations' efforts to combat terrorism. So long as it is not mistaken for the kind of broader strategy that the region requires, the FC-G5S is worth a shot.

This commentary originally appeared on The Hill on November 4, 2017. Commentary gives RAND researchers a platform to convey insights based on their professional expertise and often on their peer-reviewed research and analysis.