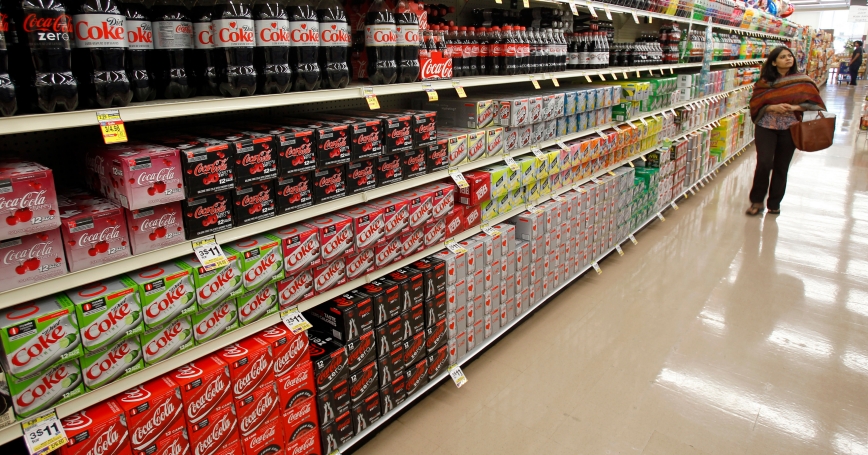 A woman walks down the soda aisle at a grocery store in Los Angeles, California, April 7, 2011

You are what you eat. It's an expression with roots in the early 1800s that has come to mean if you consume what's good for you, you will be healthy, and if you don't, well, watch out. But our latest research on what influences consumers to make unhealthy food choices has compelled us to turn that axiom on its head: You eat what you are.

In other words, your personal characteristics may be more important to your diet than where you shop and what's available to you—a concept that challenges the popular notion that building supermarkets in so-called food deserts can, by itself, help the nation's consumers develop better eating habits. Sure, if a supermarket is plopped down in a food desert—an area where it is difficult to find affordable or quality fresh food—shoppers may come. But their weakness for doughnuts and cookies will walk through those automatic doors with them.

As a predictor of unhealthy food consumption, social and demographic factors were nearly twice as important as where a person shopped for food, according to our recent RAND study. The findings come from an ongoing project studying food consumption and food shopping of residents in two low-income Pittsburgh neighborhoods that have long been considered food deserts.

As researchers trying to figure out ways to help people eat better, what we found caused us to think twice about focusing too much on providing more access to healthy choices. We needed to grapple with a version of the nature versus nurture debate that had arrived in the supermarket aisle.

When it came to making unhealthy food choices, a consumer's individual characteristics mattered more than where they shopped.

In our research, we surveyed nearly 1,400 consumers about what they had eaten over the last 24 hours and how often they bought food at supermarkets, convenience stores, specialty grocery stores and other types of food retailers. We also took note of individual characteristics such as age and level of education. When it came to making unhealthy food choices, a consumer's individual characteristics mattered more than where they shopped.

Young consumers were less likely to eat fruits and vegetables, which should come as no surprise to parents everywhere. People without college degrees consumed significantly more sugar-sweetened beverages and “discretionary fats,” such as butter. With age and education came better eating habits. Older people and college graduates ate more fruits and vegetables.

The clear role played by these sociodemographic connections argues for proactive approaches to help people improve the dietary choices they make. Particularly when it comes to eating less junk food, targeted interventions are needed in addition to building supermarkets and stocking them with “good for you” foods. Policymakers should consider putting in place proven strategies that nudge consumers to change their shopping behaviors, such as taxing foods high in added sugars.

In 2014, Berkeley became the first city in the U.S. to slap a tax on sugar-sweetened drinks—a cent for every ounce—and consumption of such beverages dropped by more than 20 percent. In Mexico, an 8 percent tax on high-calorie foods put in place the same year reduced junk food purchases by about 5 percent.

Evidence that people with lower levels of education may be more likely to reduce their consumption of sugar-sweetened beverages in the face of such a tax also comes from Mexico. University of North Carolina researchers found that a “soda tax” cut purchases of sugary drinks by 7 percent, and the greatest decrease was found among households in the lowest socioeconomic status, which was based on education and income.

More subtle strategies aimed at changing individual behaviors also could make a difference in eating and shopping habits. In-store marketing—where and how foods are displayed (PDF)—has shown promise in increasing the sales of healthy foods in supermarkets in low-income neighborhoods.

Technology may also play a role. Research has shown that just being exposed to electronically delivered dietary feedback (PDF), including practical advice on how to eat more fruits and vegetables, led to increased consumption of such foods among lower-income individuals with lower levels of education.

It's imperative to figure out how to improve Americans' eating habits. Two-thirds of us are overweight. And being overweight can lead to a host of health problems, including high blood pressure, heart disease, diabetes and stroke. Our diets are killing us. It's clearly hard to make healthy food choices if you can't get to a store that offers them. But what matters most is what you put in your cart once you get there.

Christine A. Vaughan is a behavioral scientist and Tamara Dubowitz is a senior policy researcher at the nonprofit, nonpartisan RAND Corporation.

This commentary originally appeared on Los Angeles Times on December 11, 2017. Commentary gives RAND researchers a platform to convey insights based on their professional expertise and often on their peer-reviewed research and analysis.